Sponsored content: A recently published paper shows how regional rainfall moves across the subcontinent, describing the system as “a series of invisible rivers” 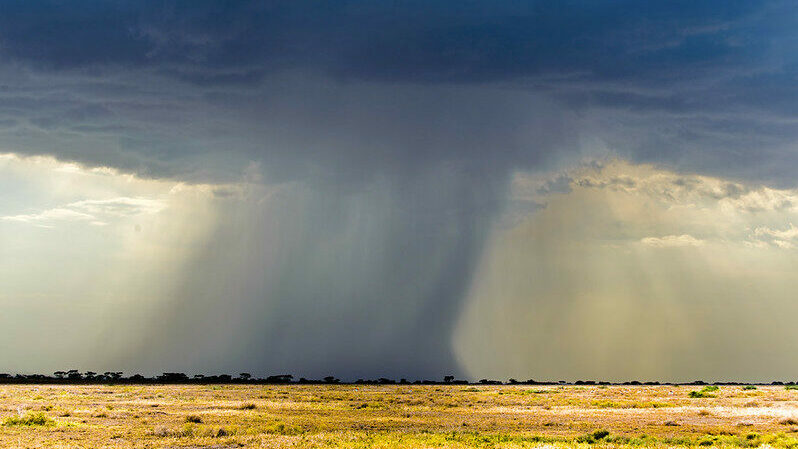 A cloudburst in the southern Serengeti, Tanzania (Photo: Flickr/Allan Hopkins)

East Africa’s rainfall depends on water vapour moving through the lower atmosphere from the Indian Ocean into the continental interior as far away as the Congo River Basin.

And when the jet streams that drive this water flow more swiftly, this often results in drought conditions over countries like Tanzania and Kenya. This system’s influence may even stretch as far south as Mozambique. However, when the jet streams slow down, water vapour movement also slows, allowing more rain to fall over these countries.

Understanding the forces that transport this water is essential if climate scientists hope to project how rainfall patterns may change across the region in future, as the global temperature continues to rise in response to thickening carbon pollution in the atmosphere.

Until now, many of the global climate models have not been able to reflect these natural forces adequately. Model simulations of the region’s rainfall generally have not matched the observed rainfall, showing that the digital models need improving.

However, a collaboration of African, UK and European geographers and climate scientists have now mapped the way this water vapour moves over the subcontinent. They describe it as flowing through the atmosphere like invisible ‘rivers’ about 500 m above the land surface in a system that transports five times the amount of water as that which flows in the Congo River system.

These invisible rivers of water vapour flow from east to west and, if the ‘transport’ along these flows is strong, it produces drought conditions over eastern and southern Africa, says Oxford University geographer and lecturer Dr Callum Munday, who is part of the Future Climate for Africa team that has mapped how the water vapour moves.

Munday and colleagues recently published these findings in the journal Geophysical Research Letters, with the support of REACH, a Oxford University-led initiative that is funded by the UK government’s Foreign, Commonwealth & Development Office (FCDO) and which aims to ‘improve water security for the poor by delivering world-class science that transforms policy and practice’.

While these invisible rivers are a key player in the aridity of the region, Munday explains that many of the global climate models aren’t able to capture the nuances of these atmospheric movements. Many of the global models, including those informing the science that feeds into the UN’s Intergovernmental Panel on Climate Change outputs, work using a 50km by 50km grid system. 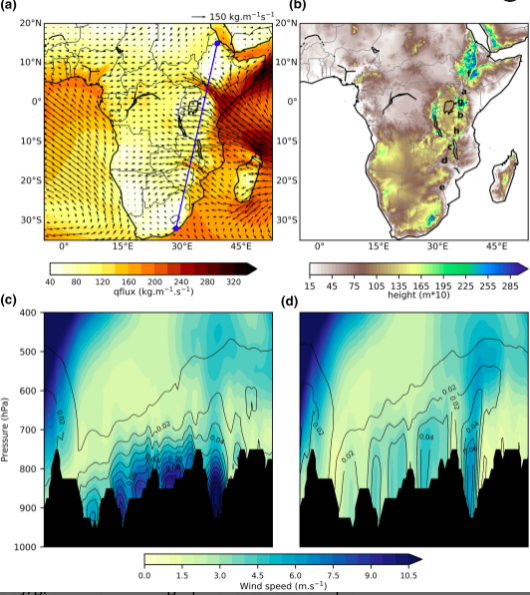 One of the models used by the FCFA teams zooms into a 4,5km by 4,5km grid. This is able to reflect the finer details of how land surface contours, such as the mountain profiles and the river basins over which these jet streams pass, influence the movement of the rivers of water vapour flowing above them.

The Turkana Jet is the strongest of these atmospheric river systems, moving a channel of water vapour over northern Kenya and southern Ethiopia that is about 600km wide. FCFA research has already shown that improved modelling of this system, using the CP4-Africa model, will allow countries in East Africa and the Horn of Africa to anticipate and prepare for future variations in rainfall and drought.

These model outputs can also assist with wind energy investments in countries like Kenya, which already has the Lake Turkana Wind Power Project in the area, and which now accounts for about 17% of the country’s installed electricity capacity.

Kenyan meteorologist Dr Joseph Mutemi with the University of Nairobi (UoN) was part of an FCFA collaboration that studied the prevailing winds in this part of Kenya and tested the accuracy of existing models used to simulate the region’s climate, so that they could improve climate models for the region.

Now, looking at eight years of rainfall and wind data, FCFA researchers are able to confirm that in the years when these jets move faster, this results in greater drought over eastern and southern Africa. They also found that changes in speed of these jets doesn’t influence rainfall over the Congo Basin, which suggests that the movement of moisture-laden air from the other side of the continent—the Atlantic Ocean—plays a bigger part in the Congo’s rain patterns.

FCFA researchers say that the next step in climate model development is that these systems need to capture the detailed structures of East Africa’s mountains and valleys with a high enough resolution that they are able to reflect regional climate both for upcoming seasons and for climate in the decades to come.

The work reported on in this story is part of the FCFA’s UMFULA research team, a project that aims to improve climate information for decision-making in central and southern Africa, with a particular focus on Tanzania and Malawi.