Sponsored content: Bangladeshis who have had to move from coastal areas as sea levels rise are organising to advocate for themselves and tackle social stigma 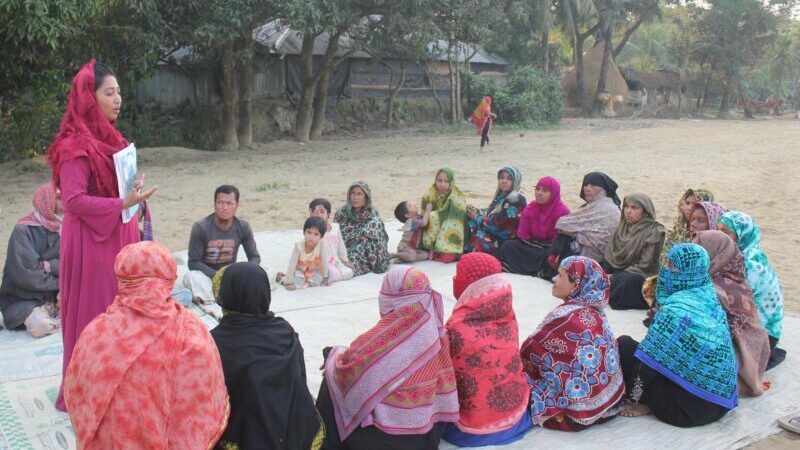 People displaced by climate impacts meet to discuss how to advocate for their needs (Photo: YPSA)

In the next few decades Bangladesh is likely to lose more than 10 percent of its land to the sea, and 18 million people could lose their livelihoods and homes.

As a result, many families must relocate from coastal areas. While some people have means to resettle elsewhere, the most vulnerable have nowhere to go and must live where they can, often on public land along the roads atop Bangladesh’s many embankments.

Cheno Ara Begum, a 45-year-old, single mother of three from the southeast coast of Bangladesh, describes how her family has been living after losing her husband and being displaced several times: “We have lived in a thatched hut alongside the embankment for five years. We regularly deal with open defecation in Kucha or ‘raw’ latrines covered with polythene and face difficulties collecting safe drinking water. Around 1,000 people are living around the Raichata village, but no one has a hygienic latrine.”

“The national program for landless peoples, the Ashrayan or ‘cluster village’ Project, builds communal living spaces that have limitations, as most people are relocated to isolated areas without access to basic needs and support,” explained Mohammad Shahjahan of YPSA. “Relocated people lose their dignity, traditional or native lifestyle, occupation, and cultural and social harmony. They face social stigma as ‘outsiders’ in their new communities and are preyed upon by local criminals. In short, this is not a sustainable solution for landless households.”

For example, in the upazila, or administrative region, of Banskhali in the Chittagong coastal area, people who face hardship due to a natural disaster qualify for local government cash assistance. The YPSA Community Team in Banskhali helped seventy climate-displaced people get information about this resource and apply for funds that help cover food and other living expenses.

One of the most difficult challenges facing the Bangladesh government – and where YPSA’s innovative efforts play a key role – is proactively relocating the increasing number of people who are or will be displaced as a result of the climate crisis in the coming years. YPSA’s comprehensive model of community-driven relocation includes everything from providing land and shelter to ensuring access to clean water, skills training, and start-up capital to build a new life.

YPSA also supports people to integrate into the receiving community. They facilitate meetings for relocating families with service providers, local authorities, and members of the host community. While the number of families YPSA has resettled through this community-based, planned relocation process is small in comparison to the need, the people they resettle are able to build a new life where they are placed.

By building an holistic model for relocation and resettlement of climate-displaced households, YPSA offers an alternative to top-down, ineffective, and often unjust relocation policies and programs. YPSA’s success demonstrates that grassroots, rights-based approaches can work for the complex challenge of climate-forced displacement, and their advocacy encourages local, national, and international governing bodies to dedicated resources to these bottom-up efforts.

“Through our community organising, we are forcing the government to address this issue and take responsibility. At the same time, we are advocating with like-minded networks and organisations at the international level to hold the wealthy nations that contribute most to climate change accountable to the people and regions this crisis hits the hardest. This challenge won’t be solved immediately, but YPSA will continue until climate-displaced people have the focus and resources they deserve,” Shahjahan stated.