Sponsored content: Planting and conserving trees in river catchments can save money on water treatment, as well as contributing to meeting climate goals 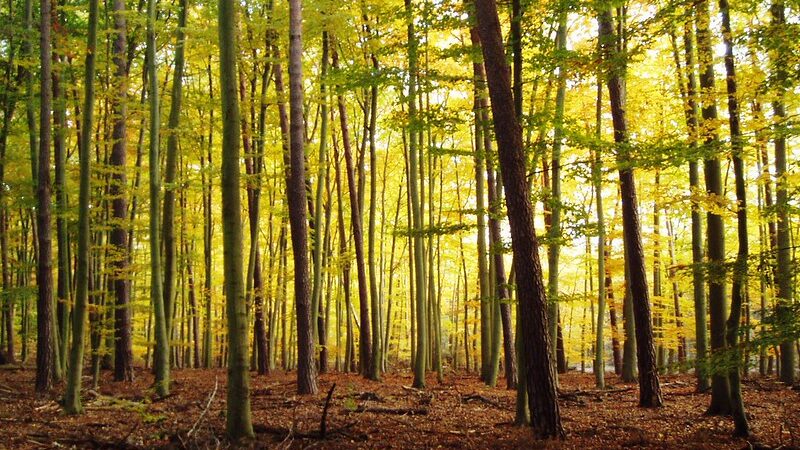 A forest in the autumn (Photo: Udo Schröter/Flickr)

The coronavirus outbreak has forced us to take a hard look at the resilience of our social support systems.

As we examine our vulnerabilities in the hopes of preparing for the next system disruption, it would be wise to include natural infrastructure—particularly forests.

The idea of forests as the planet’s lungs has become a commonplace truism, but their benefits are not one-dimensional. In addition to keeping carbon out of the atmosphere, forestland serves as a sort of firewall, safeguarding the natural systems we rely on for food, medicine, and clean water.

Around the world, we can find innovative approaches to protecting intact stretches of contiguous forest, using climate-focused drivers such as the Paris accords. One 2017 study found that natural climate solutions, including forest restoration and preservation, could provide over one-third of the climate mitigation needed between now and 2030 to stabilise warming to below 2°C.

Where forestland remains relatively unfragmented, in places such as Brazil or the western United States, wide-scale forest preservation, while not easy, is at least straightforward.

And significant carbon and water benefits accrue, both locally and globally, from such efforts. In the United States alone, forests absorb 16% of our total emissions. And the healthier our forests are, the more protection they offer for the climate and drinking water.

The data on water quality is just as impressive: one recent study of global sourcewater protection efforts demonstrated that 81% of cities studied could meaningfully reduce water pollution simply through protecting forests and pasturelands.

Forests in particular, as well as healthy agricultural lands, are nature’s filters, keeping water clean for natural and human communities.

Forests of all sizes filter water, but the bigger and more contiguous woods are especially important. The US East Coast, a vast recovering deciduous forest, has particular power both for clean water and carbon sequestration. But parcel sizes are small, land use protections are fragmented, and funding is scarce. In this setting, how do we drive protection at a meaningful scale for both climate and water benefits?

The answer, like the answers to all the complex challenges we face today, is multifaceted, distributed, and demands collaboration. In the mid-Atlantic and New England, some organisations are using the Regional Greenhouse Gas Initiative (RGGI) and private carbon markets to strike deals with private landowners to protect their woods forever.

Programs such as The Nature Conservancy’s Working Woodlands engage one family at a time, placing conservation easements on smaller parcels as the land recovers from logging and begins to store more and more carbon. Even big corporate players like Amazon are funding such approaches as part of their own carbon reduction efforts.

But while the Working Woodlands transactions focus on carbon sequestration, the water quality and security benefits secured along the way are immense. Many of the big Eastern cities like New York, Philadelphia and Newark depend on the woods for their drinking water supplies.

Today, 15 million people drink water from the Delaware river system, and the area is growing fast, pushing development into the region’s remaining forestlands.

The challenge for cities that rely on the Delaware: the river system is governed by four states, a patchwork of hundreds of municipalities, and dozens of state agencies.

The most recent estimates suggest that securing clean water throughout the basin will require permanent protection of a minimum of 350,000 additional acres of forest, primarily in headwaters and riparian corridors, at a cost of about $1.75 billion.

That expense, however, is very likely to be recouped by savings in water treatment costs, as well as in climate benefits and compliance with regional and national carbon sequestration goals.

New York City’s massive investment in its Catskills forests is an example of the kind of approach that can catalyse big dollars for big forest protection. Driven by its pressing need for clean drinking water, the city has invested hundreds of millions of dollars in forest protection.

Many hope that regional water utility dollars, combined with philanthropy, state funding, and carbon market mechanisms, can drive forest preservation at scale in the Delaware River system as well.

The ambitious Delaware River Watershed Initiative (DRWI) is leaning in to this challenge, using an innovative combination of regional philanthropic, state, and federal funding streams to overcome jurisdictional fragmentation and protect critical forests.

Working with land protection organisations across the watershed, the DRWI has permanently protected nearly 20,000 acres of high-value forestland and is pursuing an additional 30,000 protected acres by 2021.

The Delaware River challenge is immense, and offers us a test case for other stressed systems in the Eastern woods. If a model for protection can be built there, in the face of such a jurisdictional patchwork involving both public and private landowners, it could be replicated just about anywhere.

That’s an encouraging idea at a time when, frankly, we really need one.

Brendan McLaughlin is a freelance writer, editor and conservationist with over ten years of experience making the case for natural infrastructure to be evaluated and integrated into how cities, counties, states and the federal government make decisions for the future.