Sponsored content: An experimental initiative makes grants to support communities on the front line of climate change and energy impacts in defending their human rights 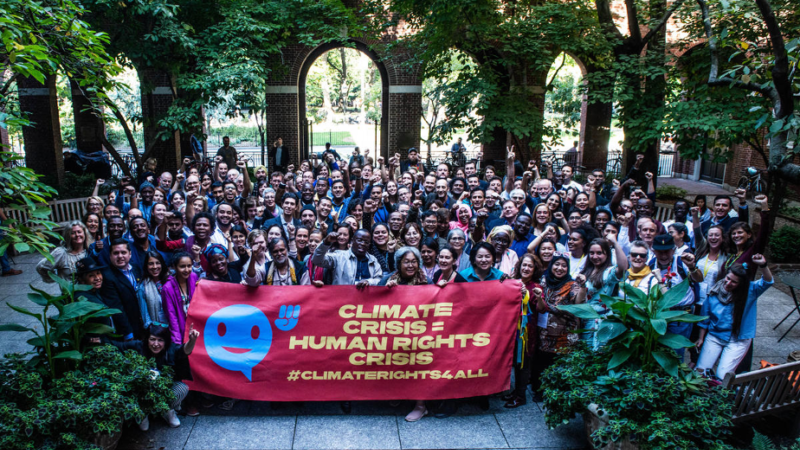 During the People’s Summit on Climate, Rights and Human Survival in September 2019, the Climate Rights Funders Collaborative was born.

It’s an experimental initiative between a handful of funders which aims to make grants at the intersection between climate change and human rights and ultimately strengthen both movements. Six organisations – Climate Justice Resilience Fund, Oak Foundation, Open Society Foundations, True Costs Initiative, Wallace Global Fund, and one anonymous donor – are pooling their ideas, knowledge, and funds. They have made eight seed grants:

We spoke to some of the key members of the collaborative about their strategy and goals.

Q: How did the collaborative come about?

Louise Olivier, programme manager with the Open Society Foundations: “It came about when ourselves (Open Society) and the Wallace Global Fund and others funded a climate summit in September last year.

“There were about 180 people from all over the world, and indigenous communities were there but so were lawyers and scientists, so it was a really interesting dynamic. I was surprised by how many commonalities people had; we thought we’d spend a lot of time getting people to hear each other, and they heard each other pretty quickly.

“But a lot of the time was spent discussing what the problems were and a lot less the solutions, and I find this often happens when you bring any constituency together; people will recite their hugely valid experiences but often battle to come up with how those challenges can be shifted into positive action and change.”

Heather McGray, director of the Climate Justice Resilience Fund: “On the margins of that Summit, a number of foundation funders got together and started to talk about how we could collaborate around supporting the human rights advocacy community to engage more effectively on climate change activism.

“We worked with Amnesty International to circulate a call for proposals to the organisations that attended that summit, with the aspiration of seeding collaborations that otherwise wouldn’t happen – that would bring human rights activism and climate activism together.”

What’s the end goal for the collaborative?

McGray: “It is a little bit experimental and it’s very much a ‘learning-by-doing’ spirit. These funders got together and said, ‘Let’s not spend a lot of time planning an elaborate strategy. We know this intersection is important, and there’s interest from the attendees of the summit, so let’s see what we can do to be supportive.’

“We had 32 applications from organizations around the world – huge interest! In the end we made eight seed grants of $25,000 each for innovative campaign ideas. The plan is to check in with those grantees next year to see whether there are emerging activities that are worth further investment.

“It’s been really fun; it’s been a super collaborative set of funders. Most of the money is pooled at the CJRF, but the coordination of the group and the proposal solicitation has been done pretty equally; each member of the collaborative has stepped up.”

Anne Henshaw, program officer at the Oak Foundation: “I think, as funders we can help foster that large effort to help coordinate and scale collective impact. We’re excited to keep working together and hopefully build on some of the work that we’ve seeded through these proposals.”

“We’re also trying to figure out how much funder coordination is needed. Do we need to build more infrastructure to coordinate the funding community around climate justice and taking a human rights-based approach, or are there existing mechanisms that we can fund and support that are already doing that?

“So, we’re taking stock of where the field is and where we can best contribute to its growth.”

Olivier: “We recognise the role that Future Fridays and Extinction Rebellion have, and they’ve done incredible work; they’ve centralised climate, they’ve pushed climate into the face of politics and the world’s leadership.

“But often the voices that are not there are the voices of the people that have been most affected, the people that feel the effects of climate on their lives every day, whether that’s the changing weather patterns, the sea level that has either risen or decreased, the small holder farmers and pastoralists whose food has been impacted.

“So, our objective is to make those voices count and help those voices be heard, to elevate and lift those voices up, to provide as much flexibility as possible to enable the agendas to be set at that level. Often those voices need to be given a broader platform.”

Why do you think climate change is a human rights issue?

Henshaw: “Climate change is a human rights issue because it undermines a broad range of internationally protected rights related to health, water, food, shelter, migration, and often the worst effects are felt by groups whose rights are already under threat.”

McGray: “Anne’s said it exactly right, but the history is that these are pretty different movements.

“You see governments that have really embraced the climate agenda, pushing big projects that can be just as harmful to human rights in many ways as old dirty oil and gas projects.

“When you’re raising cattle on pasture land in Northern Kenya and your community doesn’t have any electricity and you are suddenly confronted with this big construction project on your land, you don’t know that that’s clean energy – it’s a construction project on your land that no-one asked you about, that’s getting in your way, and it’s not bringing you electricity because your community’s not on the grid.”

Olivier: “I think when you see the donor funding in this field, it’s not funded from a rights perspective. By far the minority of this work has gone to movements and to activism.

“It hasn’t come from the perspective of the people on the ground and what they need, and I think that’s what human rights-based work in the climate space is about.

“I think rights donors try – we don’t do it perfectly – but we try to hear voices and respond to what people’s needs are. I think that’s the distinction.”