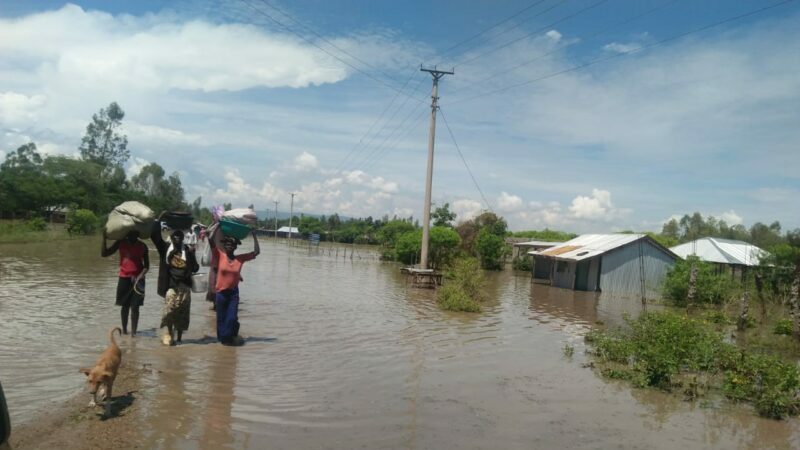 By John Marsham and colleagues

A year of exceptional rainfall, floods and locust outbreaks is decreasing the resilience of vulnerable populations in East Africa just at the time of the Covid-19 pandemic.

The combination of these disasters is not random, as the floods, lake level and locusts can all been linked to climate change.

Covid-19 is a zoonotic virus, which means it has been transmitted from animals to humans. The illegal global trade in wild animals (notably Pangolins, which are largely exported to China) has been directly damaging East Africa’s ecology for years and, even if not yet proven to be the case for Covid-19, such trade increases the chance of zoonotic pandemics.

Water levels of Lake Victoria have just reached the highest point ever in the 120 year record, displacing thousands and flooding infrastructure.

Other floods in the region have displaced tens of thousands of people and killed hundreds. The locust outbreak is the worst in 70 years and may, according to the UN, grow 400-fold by June.

Combined, these increase vulnerability and reduce the ability of the population to engage in social distancing and to practise basic hygiene just as the Covid-19 crisis hits East Africa.

The Lake Victoria basin is home to around 40 million people. The lake is the largest tropical lake in the world and its outflow is a major hydropower source.

The lake has major cities of around 5 million people on its shores, including Kampala, the capital of Uganda.

Lake Victoria is unusual in that it receives most of its water directly from rainfall, not from rivers, and loses most by evaporation, rather than through its outflow: the lake level has varied by around 3m over the last 120 years. 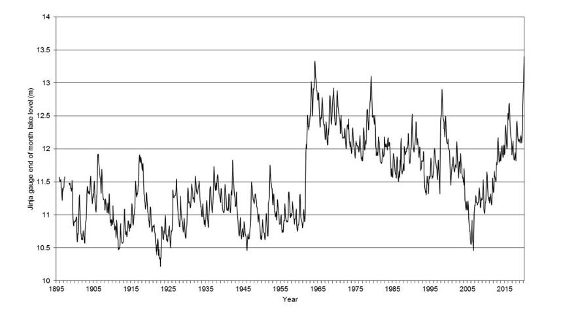 Lake Victoria water levels on the Jinja gauge (near its outflow in Uganda), derived from gauge (January 1896-December 2017) and satellite data (January 2018-April 2020). (Analysis by Helen Houghton-Carr, UK Centre for Ecology and Hydrology)

The rise in Lake Victoria levels is one of the fastest on record. East Africa has experienced major flooding since October 2019.

The exceptional 2019 rainfall was caused by warm waters in the western Indian Ocean (called a positive “Indian Ocean Dipole”, which also contributed to the Australian fires). Together with effects of tropical cyclones and westerlies between October and December this led to the Lake Victoria basin experiencing 150 to 200% of its usual rainfall.

January and February 2020 also had above average rain, possibly related to persistent warm water in the western Indian Ocean. Climate change is expected to have increased the probability of these events and so the rapid lake level rise. March to May 2020 have seen further heavy rainfall, pushing up lake levels to the near record-breaking level.

It is clear though that water management plans must plan for changes due to climate change, such as the recent rapid rise.

The fact that Lake Victoria spans three nations, and is a source of the White Nile that then supplies water to South Sudan, Sudan and Egypt, means that plans for Lake Victoria have international implications, so agreements and plans should be made well in advance, to allow adequate time to address the complex issues this will raise.

Climate change will continue to intensify rainfall and flood management must adapt.

The event illustrates how ‘natural disasters’, sometimes enhanced by climate change, are often interconnected. The exceptional rain of 2019/2020 has led to flooding directly from the rainfall, as well as from rivers and the lake, and has been linked to disease outbreaks.

The weather has affected crop growth and food prices, and has contributed to the locust outbreak. People in the region are suffering impacts of these events and Covid-19 simultaneously, or in quick succession, reducing their ability to cope, and acute food insecurity is growing.

Projected impacts of climate change on populations and ecosystems, and plans to increase resilience, must account for such systematic sequences of inter-connected events, as well as random sequencing of unrelated disasters.

The work reported on in this story is part of two projects:  (1) FCFA’s HyCRISTAL project (funded by DFID and NERC) which is working to both improve climate information for East Africa, and use this to inform long-term decision making in the region, (2) HyTpp (funded by DFID, through the Corridors for Growth Trust Fund administered by the World Bank), which is analysing possible Lake Victoria water levels under climate change.