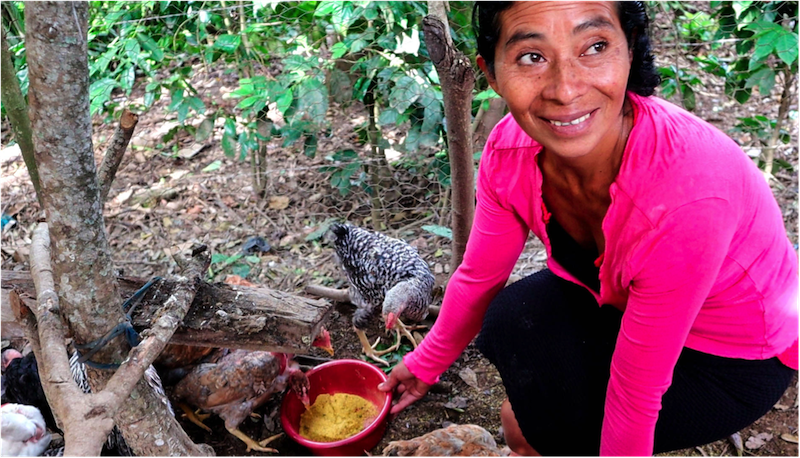 By prioritising the recovery of natural capital and ancestral practices, communities in Guatemala are strengthening their resilience to climate change-induced droughts.

The ‘Dry Corridor’ is an ecological region of Central America, which encompasses some of Guatemala, and is particularly vulnerable to increasingly irregular rainfall, suffering from both severe droughts and flooding.

As a result, poverty and food insecurity have become major issues for families and communities living in the area.

Over recent years, communities in the country’s dry corridor have established practices to be more resilient to variable weather with local self-sustainability being prioritised.

A project, implemented by the Commonwealth Copanch’orti’ and supported by the Inter-American Development Bank, piloted a series of activities to assist with adaptation efforts. Launched in 2013, the project’s primary aim was to put power back into the hands of local communities, by giving them the tools needed to adapt and become resilient to climate change.

Four towns in the district of Chiquimula were selected for the programme, due to their greater level of climate change vulnerability.

A priority focus was to look at the development and management of forests, and a system of agroforestry was adopted, (a practice in which trees are grown among other crops, usually to increase biodiversity and improve agricultural yields). In this case, nearby trees helped to restore depleted soils, thereby improving the yields of corn, bean, and coffee.

Overall forest cover was increased to improve watershed management, and to protect soil from excessive and direct heat. Reforestation programmes that included incentives brought investment to the area, and with it, a recovery of around 5000 hectares in places most at need of water production improvements.

Another area that was looked at was food and nutritional security.

An integrated system was implemented in the production of poultry where communities were given the building blocks in which to sustain a strong supply of meat and eggs. Chickens were fed with healthier products and vaccinated – and families were supplied with equipment like incubators, hatcheries, and troughs.

A more critical component, however, was the training plan, which allowed assigned members of each village to learn how to maintain vaccinations, give basic first aid, and understand ways to scale up their poultry production.

A similar activity was seen in the production of grains. Communal seed banks were allocated to villages, who were taught about soil conservation, organic fertilisers, and post-harvest management.

“The project can be scaled up and replicated in the rest of the dry corridor of Guatemala and Central America, where around 5 million people live in similar conditions”, said Omar Samayoa, a Climate Change Specialist at the IDB.

“Activities from the original model can be adapted to local conditions with, for example, other species of animals and plants that are found within the area, and other projects can be added, like water sanitation and efficient firewood cookstoves”, added Aymé Sosa, a Climate Change Consultant at the IDB also based in Guatemala.

Seven years on, and communities in the region have improved their resilience to climate change. This promotes the idea of self-sustainability and acknowledges the importance of local ownership.

A post-project assessment identified that a third of girls in the region had increased in weight and height by 27% and 23% respectively, due to a healthier consumption of plant and animal protein.

It is estimated that over 6000 families from villages across the district are annually generating around US$3.2 million of income from the sale of meat, eggs, corn, and beans, as well as from forest incentives.

“A project of this nature promotes the livelihoods of rural families” said Sydney Samuels, former Minister of Environment and Natural Resources. “It also helps to reduce chronic malnutrition in areas of desertification, presenting itself as an example for other regions”.

The model has proven to be a successful public investment with high socio-economic and environmental returns, and its achievements has raised interest about expansion.

Currently, there are plans to scale up works in 66 municipalities in the dry corridor of Guatemala, with the prospect of helping to improve countless more lives while protecting biodiversity.

For more information about the project contact the IDB’s Omar Samayoa ([email protected]) and Aymé Sosa (ASOSA[at]IADB.ORG) in Guatemala.