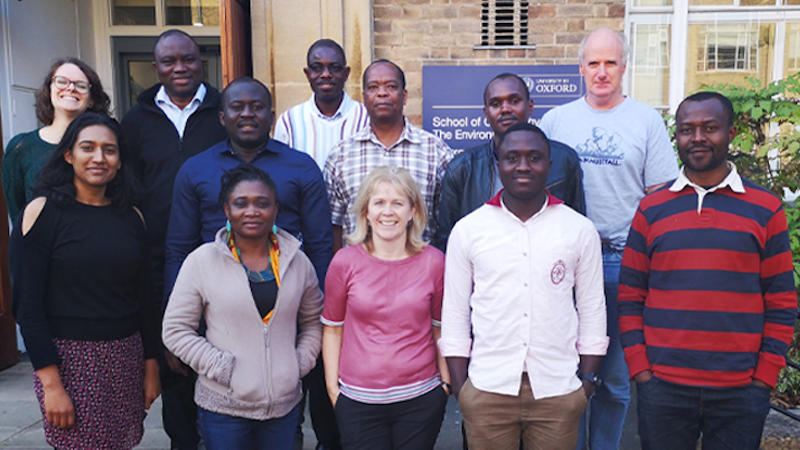 A team of researchers from Oxford School of Geography and Environment and the Met Office, Ghana, Cameroon, Kenya, and South Africa have been working together to establish a Model Evaluation Hub. This photo is from a meeting in Oxford in September 2018. (Credit: Future Climate for Africa)

By Leonie Joubert for Future Climate for Africa

The computer models which scientists use to project future shifts in climate have mainly been developed by scientists outside of Africa.

Scientists therefore have limited understanding of how these tools represent the conditions that are unique to different regions on the African continent.

A new network of climate scientists in Africa and the United Kingdom hopes to address this, by fast-tracking model development which will improve the understanding of how these tools represent climate processes in African regions. These researchers will collaborate through the Climate Model Evaluation Hub for Africa.

The ultimate goal of this work is to give policy makers in Africa improved climate information, which can better support them in their regions in order to respond to changing climatic conditions resulting from human-driven carbon emissions and rising global temperatures.

According to Dr Rachel James, researcher at Oxford University’s School of Geography and the Environment (SoGE), the Climate Model Evaluation Hub for Africa is ‘people-centred’ and aims to connect African experts in weather and climate, with climate modelling centres internationally. The collaboration will allow them to work together to test how the digital simulation models represent African climate.

The first phase of the initiative, called LaunchPAD (Priority on African Diagnostics), is underway. This will allow scientists to develop climate model evaluation tools, which can be automated across the newest generation of climate models, quickly providing more information about how models represent African regions.

The evaluation analysis is being done by ten early-career researchers, and all regarded as emerging leaders in climate science. They are based at the Kwame Nkrumah University of Science and Technology in Ghana, the University of Cape Town in South Africa, the University of Nairobi in Kenya, and the University of Yaoundé I in Cameroon. These researchers are working with a leadership team across these four African universities, SoGE, and the Met Office in the United Kingdom, as well as a researcher and software engineer in Oxford.

The idea of creating this network to help improve climate model analysis for Africa was led by Dr Cath Senior at the Met Office, and emerged after a few years of conceptualising the initiative, explains Dr Rachel James, who is the Co-Investigator and coordination lead for LaunchPAD. This evolved from collaborative work under the IMPALA research consortium that is part of Future Climate for Africa (FCFA).

Part of the FCFA work has allowed researchers in African universities and in the UK to improve understanding of how these models represent the forces driving climate over Africa. For instance, by comparing observed data from weather stations and satellites in East Africa with existing climate models, Dr Joseph Mutemi at the University of Nairobi has showed that during East African short rain season, the modelled winds over the Indian Ocean were flowing in the wrong direction. This provides a clue for those working to improve the model.

LaunchPAD is funding further work in this area. This process of model evaluation is based on climate model experiments which have been run by climate modelling centres worldwide to represent present day conditions. Data from these experiments are available online, researchers compare the different grid outputs from the models with what is happening in the ‘real world’, using observations from weather stations and satellites.

Another example of model evaluation that is already underway is the work of Malagasy oceanographer Dr Rondro Barimalala. Barimalala is one of the hub’s early career researchers, who is also part of the FCFA team based at the University of Cape Town. She is helping refine the models by testing them to see how much the profile of Madagascar impacts on cloud and storm formation over the subcontinent, linked with air movement from the Indian Ocean.

Barimalala’s skills in model refinement have opened up the opportunity for her to join the Intergovernmental Panel on Climate Change (IPCC) as part of its panel of scientists who are compiling the next global summary on the state of climate science. This will be published in 2022 in the IPCC’s Sixth Assessment Report. She is a lead author on the section of the report, which uses climate modelling processes to better understand the human causes of climate change.

In LaunchPAD, Barimalala will develop her analysis of the Mozambique Channel Trough into an evaluation tool, which is automated to run across many different climate models. This will give more information about how different models represent this part of the world. The results will be available online, including on the LaunchPAD website.

The Climate Model Evaluation Hub is designed to be a longer-term initiative. As this short first phase of funding approaches its end in August 2020, the team will host a workshop with the wider African climate science community to create a strategy for the next phase of the hub.

Some of the work reported on in this story is from the IMPALA (Improving Model Processes for African Climate) initiative, which tackles an important scientific hurdle that limits decision-makers from using climate information: current climate models have only a modest ability to capture African climate systems.