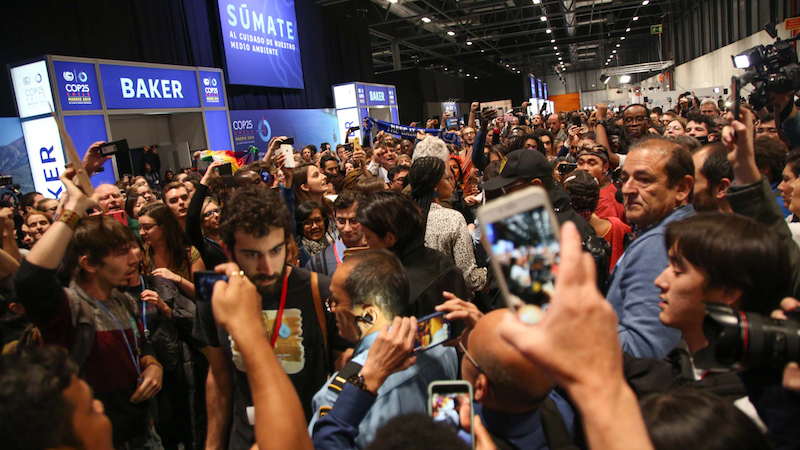 A mass demonstration outside the Cop25 plenary, protesters were ejected from the venue by the UN (Photo: IISD/ENB - Kiara Worth)

Wednesday was branded the day of ambition. But no major economies were willing to commit to changing their Paris pledge.

Only the EU, which on Wednesday released it’s Green Deal (our story here), has been clear about its intentions, despite needing to overcome some internal opposition.

And yet, Cop25 could still send a signal that would increase pressure for governments to bring “new or updated” commitments next year. We report on a line of draft legal language many are looking to as the last hope for this meeting to spur action.

“A meaningful price on carbon will help to ensure that the burden of dealing with the effects of climate change lies with those who can change the system and make the biggest impact on reducing emissions: the private sector,” says Feike Sijbesma, CEO of Royal DSM. Read his full blog here***

Greta Thunberg, who has been named Time magazine’s person of the year, addressed the talks one last time before heading home to remind negotiators and ministers of the world’s remaining carbon budget to limit warming to 1.5C.

“Finding holistic solutions is what the Cop should be all about,” she said. “But instead it seems to have turned into an opportunity for countries to negotiate loopholes and to avoid raising their ambition.”

There were strong words by Jennifer Morgan, executive director of Greenpeace, who pleaded with diplomats: “I have never seen the divide between what is happening between the inside of these walls and the outside so large. The heart of the Paris Agreement is still beating but barely, don’t give up.”

And from Hilda Nakabyue, a youth climate striker from Uganda: “I don’t understand why the most affected countries are always under represented [at the talks],” she pointed out. “I come here to represent millions of African young people who are bearing the brunt of the climate crisis.”

In an unusual press conference, Japan’s environment minister Shinjiro Koizumi had a heart-to heart with reporters addressing his country’s ongoing support for coal.

Koizumi said he did not want “Japan’s good efforts” – he pointed to changes in their export credit policy for financing coal projects overseas – to “be overshadowed”.

“I hope that the statement I made today will be a starting point from where Japan will not only be subject to criticism for its coal policy but Japan will receive proper appreciation for its efforts towards decarbonisation.”

In a statement, Brazil, South Africa, India and China called on developed countries to fulfil their commitments to provide finance and support to developing countries before 2020. This is a key priority for emerging countries. So is concluding negotiations on carbon markets. Whether Brazil will soften its stance for an agreement to be found is yet to be seen.

Elsewhere at Cop25… In an extraordinary move, more than 200 climate activists were forced out of the conference centre on Wednesday afternoon by UN security after staging an undeclared protest in front of the talks’ plenary.

Security kettled protesters – who demanded rich countries pay up for the damages caused by climate impacts in vulnerable countries – and forced them outside the venue.

UN Climate Change policy does not allow “unauthorised demonstrations” with delegates facing having their badge confiscated and being denied access to the venue.

A statement by civil society groups denounced “an unprecedented crackdown”.  Jamie Henn, co-founder of 350.org told CHN those escorted out of the conference hall “are exactly the voices we need in this process”.

“Instead, they were driven out into the cold and the door was slammed in their face. UN Climate Change should be kicking out the polluters who are corrupting this process, not the people who are fighting for progress,” he said.

UN Climate Change released a “joint statement” with unnamed observer organisations, which called the protest an “unfortunate security incident”. The statement said the organisations had agreed to abide by UN policy and “in light of this renewed commitment” the protesters would be allowed to reenter Cop25.

This adds to an atmosphere at the Cop unusual tension between the authorities and climate NGOs, who have had their newsletter banned. In another incident, reporter Kate Aronoff said she was temporarily detained by security after asking them why they were filming NGO observers.

The UN agenda for Thursday is here.

What to watch out for… The closing plenaries of the talks are due to start this afternoon. Delays should come as no surprise. This is also when some of the burning political issues in these talks could blow up into public light. The action could be about to start.