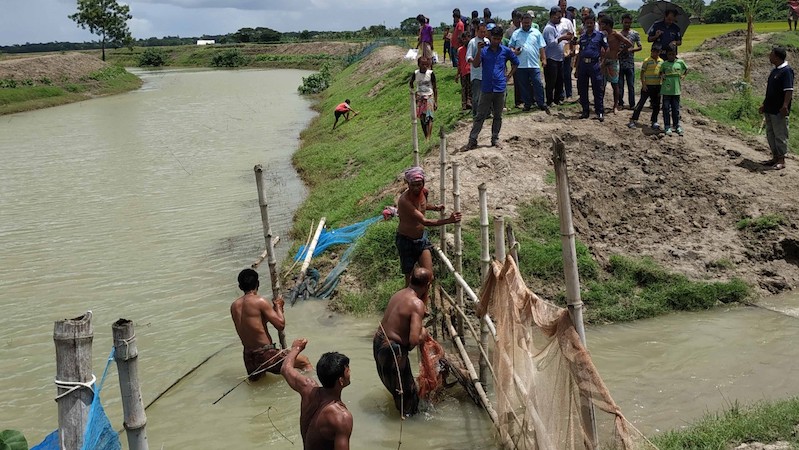 In places like Kultali, canals are important because they store freshwater, a precious resource in this salinisation prone coastal area. Traditionally, freshwater canals in Bangladesh have been public resources, with open access to everyone in the neighbouring communities. But in recent years, weak local governance has enabled local strongmen to illegally take control of the canals for private fish farming, or to fill them in, creating land where there once was flowing water. This leaves farmers and fishers with less and less fresh water for their livelihoods, creating further marginalisation among already-vulnerable people.

This domino effect of problems has caught the attention of three organisations partnering to help get the canals back in the hands of the people: a research institute, the International Centre for Climate Change and Development (ICCCAD); a national sustainable development NGO, Center for Natural Resource Studies (CNRS); and a public interest law group, the Center for Climate Justice – Bangladesh (CCJ-B). This coalition is spearheading a small initiative they call Governance for Climate Resilience (G4CR), which aims to empower poor and marginalised households to build their resilience to climate shocks and stressors.

A focus of the G4CR project has been to restore and safeguard freshwater canals by building links among communities, advocacy groups, and local government. And it’s been working.

“Firstly we demonstrated that these were rivers and canals, taken over by people who now claimed to own them. We took that to the authorities to show that these were illegal acts so the canals could be returned,” said Saleemul Huq, Director at ICCCAD.

“Secondly we worked with communities to take collective action to protect those public natural resources. People volunteered their time and labour to dig out the land and return it to a water body,” Huq said.

After the restoration of 540 metres of the Kultali canal, newly available freshwater enabled farmers to experiment with climate-resilient crop varieties and try out integrated rice-fish-vegetable farming practices. The results were very promising, with higher yields per crop and year-round production, instead of one crop per year.

With this initial success, G4CR is looking to use their methods with other water bodies in the region, and elsewhere. Moreover, word of the success is getting out to neighbouring communities.

Projects like G4CR combat the problems of climate-vulnerable communities by setting in motion a positive domino effect of solutions.

“First people need to understand their rights to public resources like the canals,” said Heather McGray, Director of the Climate Justice Resilience Fund, which supports the G4CR. “Then they can learn how to assert those rights through advocacy and legal action. Once they have control of the resources again, they can use them in more positive and productive ways, to build climate resilience equitably.”

“People are demanding their rights,” said ICCCAD Coordinator Istiakh Ahmed, “so we’re training local farmers and stakeholders, young people, men and women, and they can then can go to the local government to ask for their rights to claim justice in the area of water and food security.”

“This is the start of a journey towards achieving pro-poor and pro-environmental management of landscape production systems,” added Rahman. “The end goal is to help communities to have a better living.”