Comment: After Greta Thunberg sailed to a UN meeting in New York, some called for all climate diplomats to do the same. That would only disadvantage the most vulnerable 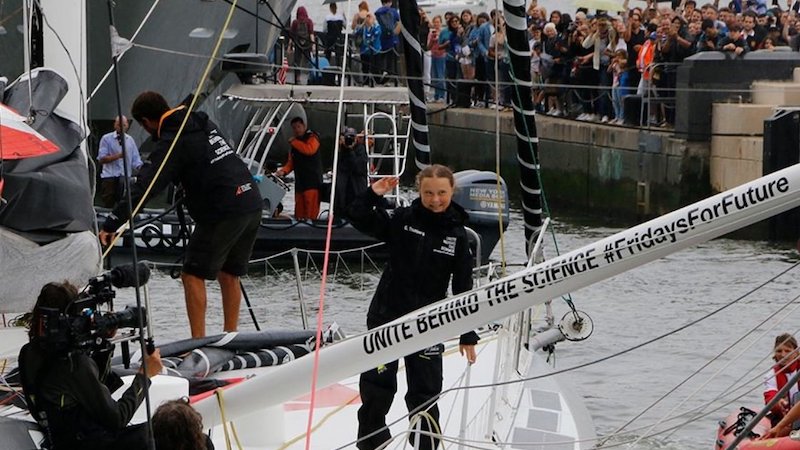 Thousands of people – including heads of state, senior diplomats and civil society leaders – will soon arrive in New York for a United Nations summit on climate change, where nations are expected to ramp up their climate pledges under the Paris Agreement.

The irony that most will come by plane and leave a huge carbon footprint in their wake is not lost on anyone.

We should all be thoughtful about the amount we fly. But some of my civil society colleagues are calling for all climate conference attendees to amp up their commitment to low-carbon travel. They’ve suggested attendees to next year’s UN Climate Change Conference, likely to be held in Scotland, attend either through zero-emissions travel – like Greta Thunberg’s sailing journey to New York – or via videoconferencing.

I think this push is dangerous.

As a writer for IISD Reporting Services and previously a New Zealand youth delegate, I’ve been to several UN climate change conferences, also known as Cops. Before my first conference, I had an image of what it would be like: country delegates sitting in a huge, flag-filled room talking climate change. It quickly became clear that’s only what they look like at the very beginning and end.

In between, talks splinter into 20 or 30 parallel workstreams, each discussing a different complex issue. At last year’s COP in Poland, I counted 27 different workstreams. There are usually five to 10 meetings happening at the same time in different rooms.

On top of these, there are the informal and private meetings: the one-on-one bilaterals with the Cop president or the executive secretary of the UN’s climate treaty body; the casual, unplanned chats in the cafeteria; the diplomats who huddle together, cross-legged, on hallway floors.

The outcomes of the Cops are highly informed by this fragmented, informal process. The most powerful nations – who have historically been the drivers of carbon emissions while enduring fewer impacts – bring large teams to the conferences. They can take advantage of a divided process by being in many places at once. The United States, for example, brought nearly 150 people to the Paris Cop in 2015.

Least developed countries and small island developing states, on the other hand, often arrive with two or three delegates. How do these countries, who endure the direct effects of climate change most intensely, advance their priorities in 27 different workstreams meeting in different rooms?

They band together and pool resources to advance their common positions in the many different discussions. This kind of coordination is organized via face-to-face meetings and hallway huddles, where rapport and relationships are key.

Now imagine a scenario where delegates can only take the train or sail to attend a negotiation, as demanded by some in civil society. Who would show up? Who could afford to commit diplomats, heads of state or critical ministers to travel for weeks at a time? European nations can reach Scotland by train. Canada and the United States may be able to consider an ocean voyage. Perhaps China could put a delegation on a train for a month. Maybe some other richer countries, like Mexico, Japan or Brazil, could think about participating.

Teleconferencing seems a more workable option, but this relies on fast, dependable internet, which many countries lack. Ask any government official from a small island developing country about connectivity and they’ll tell you.

Teleconferencing also wouldn’t allow for those not in the room to participate in the informal element of the negotiations. If powerful nations are the only ones physically in the room, they’ll have unique access to those meaningful, informal chats, those hallway huddles, those chances at collaboration.

I’ve watched the process for six years. This is how it works.

By all means, let’s ask European delegates to take the train to the Cop in Glasgow and celebrate individual examples – like Greta’s sea voyage to New York – as powerful symbols. But demanding low-carbon travel for all will only further disadvantage the most vulnerable.

There are many problems with the UN climate talks: corporate influences and the fossil fuel lobby continue to co-opt agreements and water down ambition as global temperatures rise. I hope voices like the Extinction Rebellion movement continue to criticize the process and take action at the next climate Cop.

I hope they act in service and in consultation with the most vulnerable. A global flotilla of ships and videoconferencing paid for by wealthy nations sounds idyllic but insisting on sustainable travel will only reinforce the exclusion of the global south.