‘There is no coming back from disappearing coastlines’

Sponsored content: Alaska Native communities working on the frontline of ‘usteq’ or land collapse are striving for recognition and emergency relief 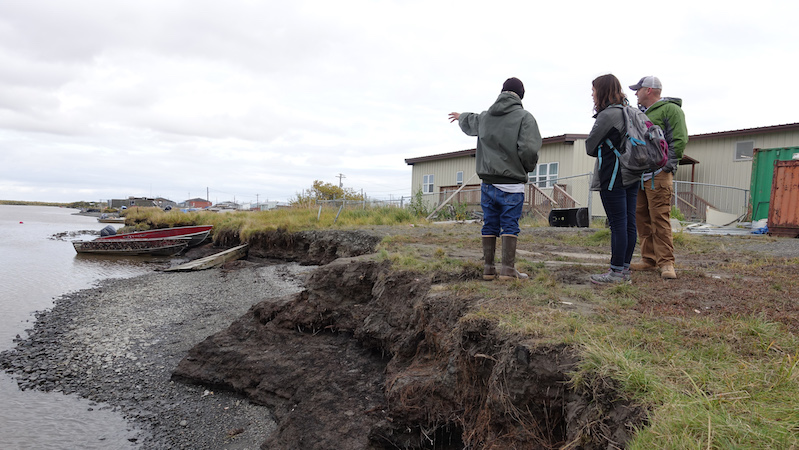 The landscape is changing drastically in Alaska, where the climate is warming at twice the rate of the rest of the planet.

In the past, Alaska Native communities on the Bering Sea coast had miles of solid ice in their bays and harbors most of the year, and they built their homes on tundra that stayed permanently frozen. Now, the ice is gone except for a few months, and the permafrost is thawing.

However, Alaska Natives have a long history of resilience, and they are working together to manage the adaptation of their communities through the collection of data on a new environmental hazard: usteq.

As Alaska’s natural buffer – ice – disappears, the coast is battered by a combination of storm surges, rising seas, and river flooding. This combines with the melting of the fragile tundra to frequently cause instances of catastrophic land collapse, otherwise known as “usteq”. It happens much faster and more severely than natural coastal erosion; villages have seen up to three meters of land collapsing into the sea in one night.

Usteq, which is a Yup’ik word, is a different and more serious environmental hazard than simple erosion. The changes to the landscape as a result of usteq are so dramatic that they have forced indigenous communities to face a difficult decision: whether they should leave their land, and if so, how they can relocate together as a community.

“We do not have the funding to move the whole village away from the water banks, so we started with the buildings most in danger of collapsing because of the erosion,” said Harold Okitkun of the Kotlik community.

Kotlik is just one of around 12 Alaska Native communities that participate in regular teleconferences where they discuss cost-effective ways to help deal with usteq. “We work on erosion monitoring, measure the bank and keep records of how many feet we are losing per year, and mark the bank along the village comparing it to previous years,” Okitkun said.

Villages have begun documenting their usteq damage in order to help make the case for government support with their adaptation and relocation. Since 2017 usteq monitoring devices have been installed in eight communities, as well as permafrost monitoring in two.

“These are great changes to the landscape, miles of thick ice is melting, it is a huge ecosystem shift in the Bering Sea that will have worldwide consequences,” said Delbert Pungowiyi, the tribal council president for the Native village of Savoonga.

Savoonga is one of two coastal communities located on St Lawrence Island in the Bering Sea. Pungowiyi has seen how the island’s shoreline has changed over almost 60 years. Winter arrives late and leaves early. Where the island used to have up to nine months of solid ice, it is now down to just three months in recent years. 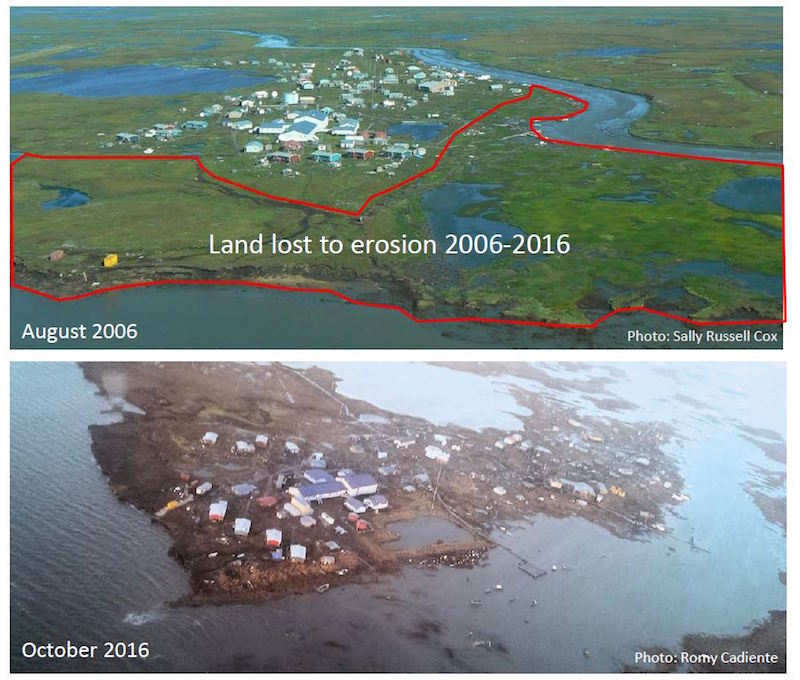 Coastal erosion between 2006 and 2016 as a result of usteq in Newtok, Alaska (Photo: Sally Russell Cox/Romy Cadiente)

The ice is essential for the traditional livelihoods and food security of communities like Savoonga. Hunting and fishing methods rely upon ice, as do many of the animals hunted. With shortening winters and more unstable ice, hunters face greater risks when traveling and more difficulty reaching food sources.

The food yield has dropped to less than half in the last ten years, said Pungowiyi. “This affects our way of life, which we have done for thousands of years living on the island,” he said. “We’re really working hard adapting to the changes that will face us, but we want to be careful to ensure that there will be little to no impact on the environment.”

Currently, there is no governing framework to help communities decide if they should stay where they are located. Neither does the key national disaster response policy, called the Stafford Act, recognize usteq as a hazard. This means that the communities critically affected by usteq are not eligible for emergency funding, because coastal erosion is considered an ongoing environmental change process, not an emergency.

It is this lack of a framework that underscores the severity of usteq, and the need for it to be recognized as a hazard has pulled Alaska Native communities together to monitor change and share experience in preparation for community-wide relocation.

“We are working to change the laws that currently are inadequate to address the crisis upon us,” said Robin Bronen, the Alaska Institute for Justice’s (AIJ) executive director. AIJ has been helping Kotlik and other coastal communities monitor usteq in order to get it legally recognized as a hazard. This would, in turn, help communities obtain government funding to relocate.

AIJ has had success in getting usteq included Alaska’s hazard mitigation plan and in turn recognized by Fema, the agency that oversees emergency funding. “Being able to define usteq through indigenous knowledge holders was huge and the identification of it in Fema was critical,” she said. The next step is for usteq to be included in the Stafford Act.

The organisation also works to facilitate tribal engagement with state and federal agencies in the United States to provide these agencies with insight on how they could enable community-wide relocation. “There is no coming back from disappearing coastlines,” said Bronen, who added that millions of people worldwide who live on coastlines will soon have to deal with their lands disappearing.

It is important for Pungowiyi that the efforts of Native communities to protect the environment are noticed. “We need to be self-generating, self-sustaining economies so that we can better take care of ourselves and Mother Earth,” he said. “We are not seeking protection for our people or for Alaska alone, we are seeking protection for all of humanity, for all human beings on our Mother Earth.”