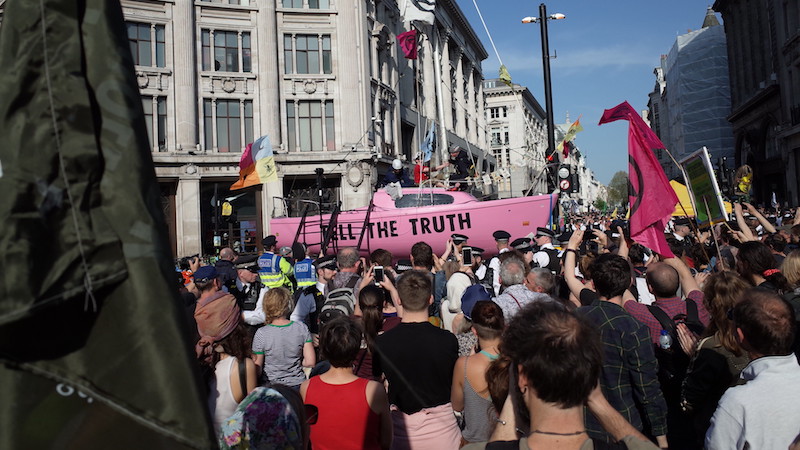 A citizens' assembly is one of the key demands of Extinction Rebellion, whose protests brought London to a grinding halt in April (Image: Flickr/saw2th)

After years of languishing at the margins of the public discourse, it looks like 2019 will be the year that – finally – we start ‘talking climate’.

Today’s announcement (by not one but six government select committees) that a UK Citizens’ Assembly on climate change will be held in the autumn, comes hot on the heels of the Scottish government outlining a Big Climate Conversation scheduled for the summer. A series of regional, city-led public dialogues will take place over a similar period of time (for example, in Oxford). And the Irish government beat everyone to it, convening its citizens for a national conversation on climate change (and other important topics) last year.

A Citizens’ Assembly is one of the key demands of the Extinction Rebellion group, and there’s no question that the group’s bold civil disobedience (including locking down parts of central London for a week) has propelled both climate change and the concept of a Citizens’ Assembly up the political agenda.

But Citizens’ Assemblies – or variations of them – are something that many in the climate movement (from social scientists to public engagement specialists) have been advocating for a long time. Central to the work we do at Climate Outreach is the conviction that we can’t solve a problem like climate change without deep-rooted and widespread public consent, and a national conversation about the unprecedented transition ahead of us.

The evidence is clear from our own extensive public dialogue work that most people, when given the chance to reflect on what climate change and a societal response to it means – in their own terms, and with reference to their own values and aspirations for the future – relish the opportunity and are keen to engage.

We produced a toolkit on holding climate conversations for the Scottish Government, providing an important input to the planned ‘Big Climate Conversation’ approach this summer. And through our ‘Global Narratives Project’, we have led and facilitated dozens of climate conversations with communities around the world, including Alberta, Canada (home of the tar sands, and where a transition to clean energy urgently needs to get underway) and in India, with partners who are testing and developing narratives for engaging members of the Indian public on climate change.

So the fact that there is a sudden explosion in interest in talking to people about climate change is hugely positive. Done properly, public dialogue enriches and enhances political decision making – and through deliberation, rather than forcing people into a binary decision (as in a referendum), the process and conclusions can avoid the toxic polarisation that has now smothered the public discourse on membership of the European Union.

The turn towards Citizens’ Assemblies is a big step forward, and should help to lock in the sense of momentum that has swept through the climate movement in the UK and further afield in the first half of 2019.

It is arguably no surprise that policy makers are now turning towards the public, after many years of keeping climate change hidden behind a technocratic screen. As the Committee on Climate Change’s recent Net-zero report showed, almost everything that we need to do to get from here to net-zero (they estimated 65%) involves people to some extent – supporting policies, changing behaviours, or being prepared to do things differently.

But advocates for public dialogue should not be naive about the risks, as well as the benefits, of partially handing over the reins for critical public policy issues like climate change to a representative group of citizens.

Public decisions on how to decarbonise our societies are unlikely to be consensual. ‘The public’ may not want to move as far or as fast as Extinction Rebellion, for example, are advocating. Our own work on how people think about net-zero goals suggests they are broadly supportive, but that totemic issues like reducing meat-eating and avoiding flying will be a major uphill battle – something the new Centre for Climate Change and Social Transformations (CAST Centre), in which we are a core partner, will focus on.

‘Talking climate’ is a crucial and long overdue step to getting to grips with climate change. But if we’re serious about a just transition towards sustainability that includes everyone, we should expect this year’s Citizens’ Assemblies to be the beginning, not the end, of the conversation with the public.