I am a denier. A human extinction denier

Comment: The rhetoric of extinction and emergency does not adequately describe the situation we find ourselves in and is counter-productive 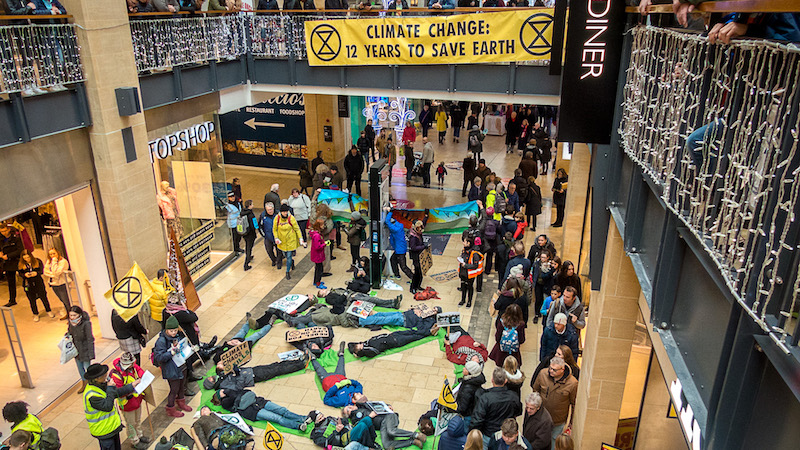 "The slogan 'we have only 12 years left' has somehow been extracted from this [but] the IPCC Report offers neither scientific nor historical evidence for human extinction" (Photo: Extinction Rebellion)

There has been a lot of talk recently about climate change and extinction.

It is undoubtedly the case that species go extinct. And sometimes large numbers of species disappear together in mass events caused by the same physical stresses. It is also true that at some point in the future the human species will go extinct, or at the least evolve into a new species partly of our own making.

Yet I resist the current mood of ‘extinctionism’ which pervades the new public discourse around climate change. Talking about the future in this way is counter-productive. And it does a disservice to development, justice, peace-making and humanitarian projects being undertaken around the world today.

A denier is a person who denies something, “who refuses to admit the truth of a concept or proposition that is supported by the majority of scientific or historical evidence.” If I do not believe that climate change will drive the human species to extinction, does that make me an extinction denier? For I do not believe that there is good scientific or historical evidence that climate change will lead to human extinction.

And yet you would be led to believe that there is. Last September the United Nations secretary-general António Guterres made the bald claim, “We face a direct existential threat” from climate change. Jem Bendell at the University of Cumbria warns, “there is a growing community of people who conclude we face inevitable human extinction”. Bendell goes on to state that ‘Inevitable Near Term Human Extinction’ (INTHE) has become a widely used phrase for online discussions about climate-collapse. And Greta Thunberg frequently claims that climate change “is an emergency, this is an existential crisis”.

Across the Atlantic the American commentator Tom Englehardt has placed humanity on a suicide watch for itself.  “Even for an old man like me,” he says, “it’s a terrifying thing to watch humanity make a decision, however inchoate, to essentially commit suicide.” And in David Wallace-Wells’ best-selling book, An Uninhabitable Earth, he claims that climate change is “much, much worse than you think”.

This rise in extinction rhetoric in (largely) English-speaking societies over the past 12 months is in part linked to the IPCC’s Special Report on 1.5C Warming published last October. The slogan “we have only 12 years left” has somehow been extracted from this report and feeds the rise of climate clocks such as this one from the Human Impact Lab in Montreal. But the IPCC report offers neither scientific nor historical evidence for human extinction.

From this extinction fear arises the “panic” that Greta Thunberg has called for. Panic demands a response and one response is to declare an emergency. ‘Climate emergencies’ are now being declared in jurisdictions ranging from universities, the British Parliament and several local authorities in the UK.

But the rhetoric of extinction and emergency does not adequately describe the situation we find ourselves in. Declaring a climate emergency implies the possibility of time-limited radical and decisive action that can end the emergency. But climate change is not like this. The historical trajectory of human expansion, western imperialism and technological development has created climate change as a new condition of human existence rather than as a path to extinction.

So here are five reasons why I am an extinction denier.

The rhetoric of climate change and extinction does not do justice to what we know scientifically. Climate prediction science is fundamentally based on probabilistic forecasts which underpin the quantification of risk. There is a range of possible values for future global warming. It is as false scientifically to say that the climate future will be catastrophic as it is to say with certainty that it will be merely lukewarm.

Neither does it do justice to what we know historically. Some like the American veteran journalist Bill Moyers have called for a war-like stance in relation to climate change, using the analogy of the late 1930s: “In the second world war, the purpose of journalism was to awaken the world to the catastrophe looming ahead of it. We must approach our climate crisis the same way”. But as the historian and Liberal politician James Bryce explained in 1920, “the chief practical use of history is to deliver us from plausible historical analogies”. We should beware of false or trite analogues.

The rhetoric of climate and extinction does not help us psychologically. It all too easily induces feelings of terror as Ed Maibach at George Mason University bluntly remarks: “As a public health professional (and as a human), I find the prospect of 3 or 4 degree C of global warming to be nothing short of terrifying.” But inducing a state of terror generates counter-productive responses in human behaviour.

Nor does the rhetoric of climate and extinction help us politically. Simply ‘uniting behind the science’ or ‘passing on the words of science’ gets us no further forward politically. Even if climate science predicted the extinction of humanity, as Darrick Evensen explains climate change “raises a host of ethical, historical and cultural questions that are at most tangentially connected to any scientific findings”.

And finally the rhetoric of climate and extinction does not help us morally. Even if we take these claims literally, the mere fact of human extinction by no means impels us to conclude that the correct moral response must be to prevent that extinction. There may well be other moral demands upon us which take precedence, and yet which we ignore. Why the human species above other species? Why are the future unborn more morally demanding of us than the dispossessed victims of today? Why is suicide the worst sin of all?

Despite what some claim, climate change is not a black and white issue. It has many shades of grey. By this I mean that interpreting the significance of the fact that humans are altering the world’s climate is not self-evident. To believe that there is an absolute truth to be told about what climate change means, or what ‘it demands of us’, is misguided.

What climate change means is not ‘revealed truth’ emerging from some scientific script. The political meanings and individual and collective responses to climate change have to be worked out iteratively. They have to be negotiated within the political structures and processes we inhabit, negotiations that can’t be circumvented by an appeal to the authority of science being ‘on our side’. (Of course this must also include the possibility of renegotiating some of those same political structures).

Campaigning on the grounds that the human species faces extinction because of climate change – and declaring a climate emergency – is a superficial response to complex realities. And it is talk that opens the door to one-eyed techno-solutions – such as envisaged by the putative Cambridge Centre for Climate Repair – and fuels the possible legitimation of dangerous solar climate engineering schemes.

The new condition of climate change is real. Without being deferential or uncritical, we need to be cognisant of what science can tell us about the future. We need more varied, and more active, voices in climate politics. And it requires us to think through, argue and enact political projects and ethical priorities in different ways.

But I will argue against climate politics henceforth being conducted under the restrictive conditions of emergency. And I will deny that there is warrant to collapse the possibilities of the future to human extinction.

Mike Hulme is professor of human geography at the University of Cambridge. This article originally appeared on his blog.