Sponsored content: A massive solar plant is at the heart of Morocco’s renewables drive 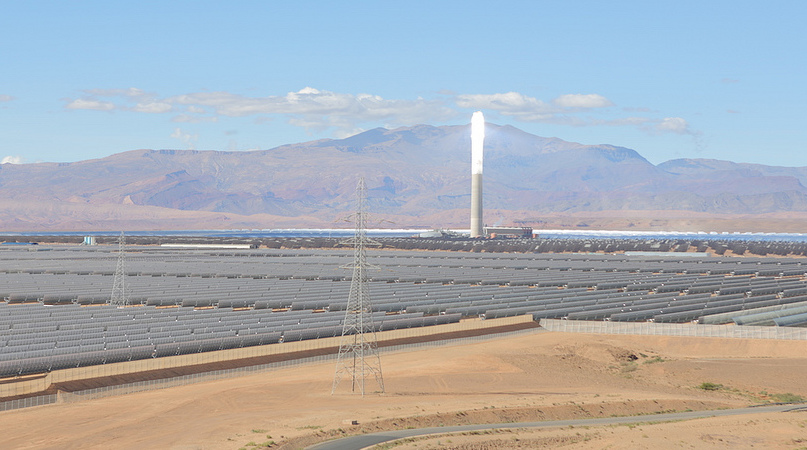 Imagine a solar plant the size of around 3,500 soccer fields, an area almost equivalent to that of San Francisco.

Or a giant field of around 2 million mirrors that turn sunlight into enough clean energy to supply around 6% of an entire country.

Fiction this is not. This is Morocco’s Noor Concentrated Solar Power (CSP) Plant, the largest solar complex of its kind in the world. Located in the southern city of Ouarzazate, the more-than-6,000-acre facility is a stunning display of Morocco’s renewable energy ambitions.

Noor is the first CSP site in Morocco, and its 580-megawatt output is accelerating the country’s bid for a 52% renewable energy mix by 2030. It also represents a significant development in global CSP capacity, which in 2016, stood at only 4.8 gigawatts (GW).

CSP is not your run-of-the-mill solar technology. The Noor complex uses rows of sun-tracking mirrors, called “heliostats,” that direct sunlight onto a receiver. The receiver heats up a specialized cocktail of molten salts and fluids, sometimes up to 100 degrees Celsius (around 212 degrees Fahrenheit), which then sets in motion steam-powered turbines that produce energy.

This liquid concoction gives CSP another distinct advantage: unlike most solar photovoltaic (PV) facilities, CSP provides clean energy around the clock. “What is special about this CSP is what we call the thermal energy storage systems that we can store the energy during the day and keep it until the night,” said Youssef Stitou, a project manager and engineer with MASEN, Morocco’s renewable energy ministry. “CSP is like a power plant with huge batteries.”

Stitou’s own career path shows that Noor, besides serving as a clean energy source for approximately 2 million Moroccans, is providing something equally valuable: opportunity. “I started my career in the beginning of 2011. First in the oil and gas industry, and then I switched to renewable energies,” said Stitou. “Fossil resources will not last forever.”

CSP is also a family affair for Zineb Aghzou, a 25-year-old engineer at Noor. “My husband is also at Noor,” Aghzou said. “We almost have the same plans, the same path.” She has worked in other industries, but she knows where her future lies. “[The CSP] solar plant is the best thing that I’ve experienced.”

Aghzou is a native of Ouarzazate, a city that sits at the doorstep of the Sahara. Its arid landscape has served as a backdrop for countless films and television shows, and as a well-trodden entry point for tourists embarking on desert excursions.

Lately, however, visitors are coming in search of an altogether new experience: Noor itself.

“We will make Noor Ouarzazate not only a site of industrial plants, but also a destination for scientific tourism,” said Mustapha Sellam, Noor’s site director. “In order to make the region more attractive, and to [have] people in the future [come] not only to see the cinema studios and the sand, but also maybe to see the Noor Ouarzazate site.”

“Morocco showed to all the other countries that it’s possible, whatever your positions in the world…to succeed.”