A sanctuary fights to protect coral, fish and the livelihoods that depend on them

Sponsored content: The White River Sanctuary in Jamaica strives to protect a delicate habitat from the threats of overfishing, pollution and climate change 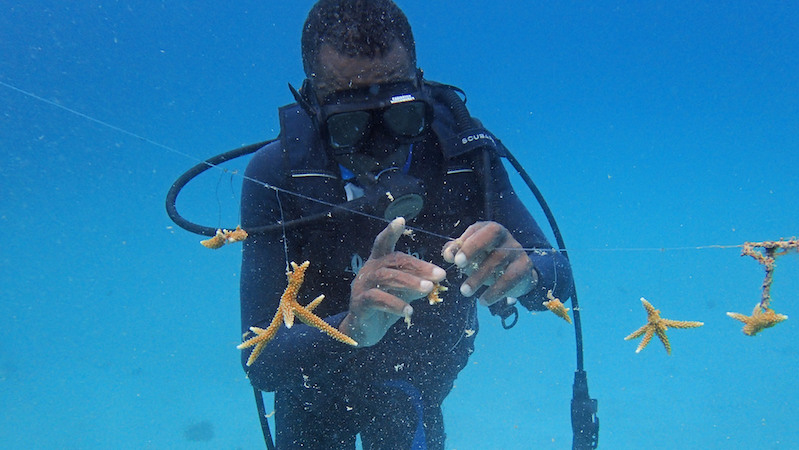 The residents of White River are thorough extroverts. They spend hours exchanging stories over meals of freshly caught parrotfish. The music they play thumps from dawn until dusk.

They’re also animated by an overriding sense of purpose: they’re waging a fight to protect their core livelihoods – present and future – against a formidable foe.

“Corals and fish are under threat in Jamaica, because of multiple different factors,” explained Dale Anderson, manager of the community-led White River Fish Sanctuary. “It’s really pollution, non-sustainable fishing and climate change. They’re really going to hit Jamaica hard when it comes to this and these are the threats that we’re trying to work to mitigate and adapt.”

Withering corals and systemic overfishing are a deadly duo for fish populations—and for the livelihoods that depend on them. “If you were to ask a fisherman who is fishing for maybe 50-plus years now, he’ll tell you that he could [once] get a parrot fish of maybe four feet. Four feet long, three feet long. Now, when [he] get parrotfish, it’s mainly under a foot,” Anderson said.

With support from the Climate Investment Funds and Inter-American Development Bank, the White River Sanctuary is mobilizing a grassroots movement to restore coral life and provide habitats that allow fish to grow more sustainably. They’ve zoned a 372-acre sanctuary off-limits to fishing and enlisted a local team of “coral wardens” to enforce it. The community has also rolled out a program to equip fishermen with resources to grow corals and turn the tide against further degradation.

With rising temperatures, corals are acutely vulnerable to bleaching and infectious disease. Increased levels of carbon dioxide chip away at corals’ ability to regenerate, which even under ideal circumstances can be as slow as one or two centimeters a year. Recent forecasts suggest that Jamaica may lose around 10% of its coral population by 2040 as a result of climate change.

Globally, between 25 and 50 percent of live coral has already disappeared—and even best-case-scenario projections from the Intergovernmental Panel on Climate Change say we are due to lose a further 70-90 percent of what remains.

In Jamaica and 80 other developing countries, corals are not only hubs of biodiversity, they also bolster livelihoods and food security, help guard against coastal erosion, and act as natural “shock absorbers” in cases of extreme weather events. At least 275 million worldwide depend directly on reefs for their livelihoods, and economists say corals contribute $36 billion to the global economy.

They also drive tourism. Last year, a record total of 4.3 million tourists visited Jamaica, representing an economic windfall of approximately $3 billion. Tourism accounts for over 10% of Jamaica’s total gross domestic product (GDP), and an analysis from the World Resources Institute estimated that between 70-80 percent of all tourists come to Jamaica to experience its sun-kissed beaches, which depend on coral reefs for protection against coastal erosion.

Since its inception, the White River Sanctuary’s 1,000 staghorn corals have nearly doubled, putting it on track to meet its target of 500% more fish biomass in five years.

After 40 years of catching and selling fish, local fisherman Everton Simpson has made the switch to coral gardening as part of the White River Sanctuary program. “We learn about the aquatic environment. [We] learn about the equipment and how to operate the [scuba diving] equipment,” Everton explained. “The process is that we have to get small bits and pieces of the mother reef and then tie them on to the clothesline suspender in about 20 feet of water…each individual nursery has about 200 pieces.”

From there, it is a waiting game. Corals grow slowly, but for Everton, the long-term payoff is worth it. “It’s like putting your money in the bank waiting for the interest to grow,” he said, “I think it’s a very great opportunity for the people who are coming after us. They will have more fish to catch and more fish to eat.”