Sponsored content: Climate negotiations don’t pay enough attention to the losses sustained when communities are forced to relocate, they say 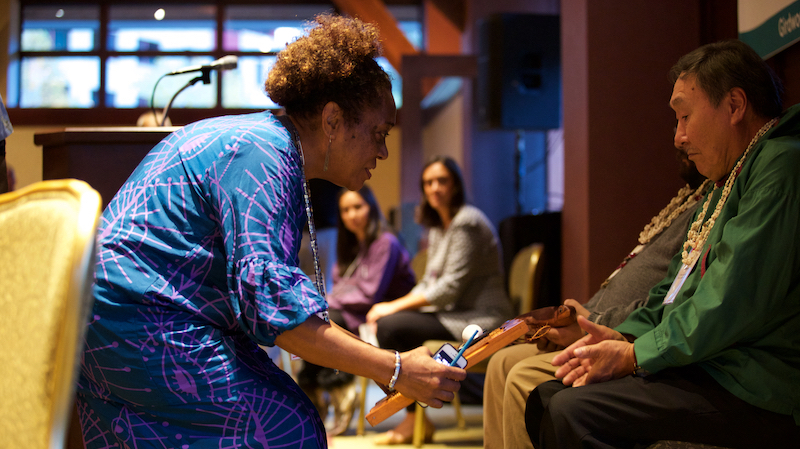 Amid intensive negotiations over global rules for future work on climate change, some communities are calling for attention to the destruction that is already pushing them out of their homes and killing their heritage.

The aim of the Cop24 summit in Katowice, Poland is to agree to complex rules that will govern how countries meet their Paris Agreement pledges to cut greenhouse gas emissions and shore up financial aid for poorer countries in the future.

But missing from the annual United Nations climate talks is the question of how to relocate and preserve the communities threatened by rising sea levels, tropical storms and other effects, according to a group of first and indigenous peoples from around the world.

“If worse comes to worst and we have to leave, there should be an instrument that protects the rights of our people who are being forced against their will,” Maina Talia, from the NGO Tuvalu Climate Action Network, said at a Cop24 side event last week. “We do not want to become second citizens in different countries. The question of sovereignty and sovereign rights will be an issue. Can a Tuvaluan be a Tuvaluan in New Zealand?”

A group of first and indigenous peoples’ organisations and communities held a convening on climate-forced displacement in Alaska in October and published a declaration ahead of the Cop24 asking world leaders to take measures to ensure they receive “adequate technical and financial support.” It also called on state governments to come up with “human rights-centred laws, policies and strategies that address the spectrum of risks associated with forcible displacement”.

There is already a public conversation about people who are losing their homes and being driven away because of climate change, but not the way it is “fracturing communities” and “disrupting ways of life”, said Reverend Mary Katherine Morn, chief executive officer and president of the Unitarian Universalist Service Committee, a human rights group.

“The conversation needs to be about more than CO2 emissions or melting ice caps,” Morn said. “We need to humanise the conversation; this is not only about science in the abstract, it’s about the intimate realities of human life.”

In Tuvalu – a South Pacific island nation with a little more than 11,000 people – climate change threatens to break up a strong community-focused culture where people share food and shelter, said Talia. The islands sit just a couple of metres above sea level, and are already coping with the damage from floods.

In Alaska, temperatures are rising faster than elsewhere – by over 3C a year in 2016, Robin Bronen, from the NGO Alaska Institute for Justice, said at the event. This is leading to warmer ocean waters and melting sea ice.

The Paris deal recognises the need for richer countries to help cover the loss and damage caused by climate change and fund projects to help them withstand storms, droughts, heatwaves and other changes.

Many communities hope to stay put as long as possible, including in Tuvalu. Yet if they do decide to move, as three Alaskan communities have done, the problem is that there is no government agency tasked with facilitating the relocation of communities displaced by climate change – in the US or anywhere else in the world, Bronen said. “So they are trying to piece together this governance framework and funding to facilitate a really complicated process.”

The difficulties these groups are already experiencing should shape the global negotiations and conversation about climate change, said Heather McGray, director of the Climate Justice Resilience Fund, which contributed to the Alaska displacement convening.

“If we are to truly address the impacts of climate change head on, we must heed the warnings of those living on the front lines, take their wisdom, and follow their lead,” she said.