After being outed on social media, a prominent environment activist admitted harassment of multiple women with whom he worked, blaming alcohol 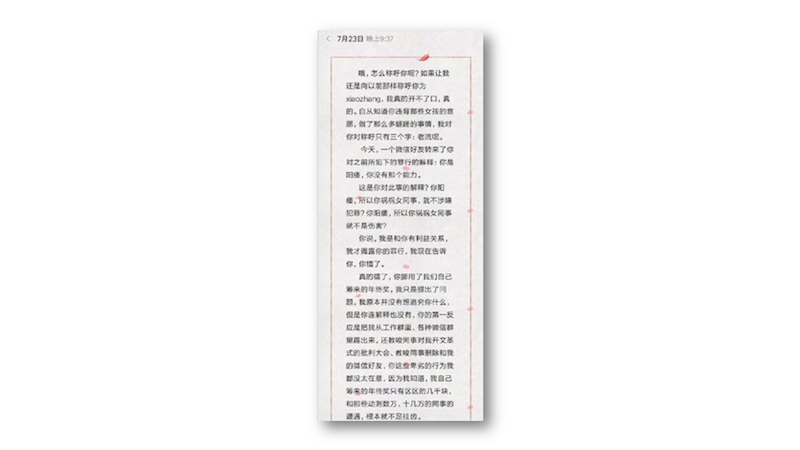 China’s NGO sector has been hit by high profile sexual harassment allegations, with a prominent leader in China’s environment movement resigning on Tuesday.

Chinese environmental activist and journalist Feng Yongfeng posted a statement on the Wechat account of Environmental Activist, an NGO he founded, on Tuesday, apparently admitting to sexual harassment of multiple female colleagues.

In the statement, Feng said: “I express my sincere apologies to all the women who have been harassed or hurt by me. I am willing to bear the consequences of all previous harassment.” He then blamed alcohol for his behaviour.

“I thought when I was sober ‘sexual harassment’ would definitely not happen. Actually when I confront my real self, I know very well that the more I am awake, the more intense my inner desires are. Because I don’t dare to express it, I used alcohol to vent it out,” said Feng. The statement was taken down shortly after it appeared.

Feng confirmed to Climate Home News that he had resigned from the management of the Nature University, a non-degree community centre he founded in 2009. He made no comment on the sexual harassment accusations.

Feng also established the Green Beagle Institute in 2009. He has worked as a journalist for Guangming Daily, a national newspaper and one of the Chinese Communist Party’s official organs, and was a member of the China Dialogue-Guardian China Environmental Press Awards committee.

Feng’s statement came only one day after the accusation and public confession of another prominent Chinese charity worker. Lei Chuang, founder of Hepatitis charity Yi You and well-known anti-discrimination activist, admitted to sexual harassment of volunteers. He used his WeChat account to apologise.

Some China watchers commented on Twitter that the #MeToo campaign, which began with accusations against male celebrities in the US, had spread to China’s public sector.

Feng’s resignation followed the circulation on social media of an anonymous letter on Monday July 23, which accused someone known as “Xiaozhang” (headmaster) of sexually assaulting female colleagues in the environmental NGOs. Feng was not named in the letter. Within the Nature University he is known as Xiaozhang.

The letter alleged Feng had harassed multiple women working at the Nature University or for organisations that had cooperated with Nature University, including the Narada Foundation, a well-known Chinese private foundation.

The Narada Foundation released a statement on late Monday confirming one of Feng’s alleged victims worked at the foundation and outlining its own version of the allegations.

The Narada Foundation alleged that in October 2017, Feng sexually harassed a female employee during a business trip. Though the victim resisted, Feng dragged and pulled her and slightly injured her arm, the statement said. The woman managed to escape and stood outside the room, she asked Feng to leave. Then Feng left.

The Narada Foundation said the trip organiser later changed the room for the woman and accompanied her to move to another building. On the next morning, she returned to Beijing. The event organizer decided to cancel a speech Feng was scheduled to give and Feng also left that morning, the statement said.

After the incident, the Narada Foundation said it approached Feng who later submitted a written apology letter to the victim. The organization decided to stop any funding or involvement with Feng.

Read more on: China | World | Me Too China