Ecosystems across Australia are collapsing under climate change

Comment: The Great Barrier Reef has become a notorious victim of climate change. But it is not the only Australian ecosystem on the brink of collapse 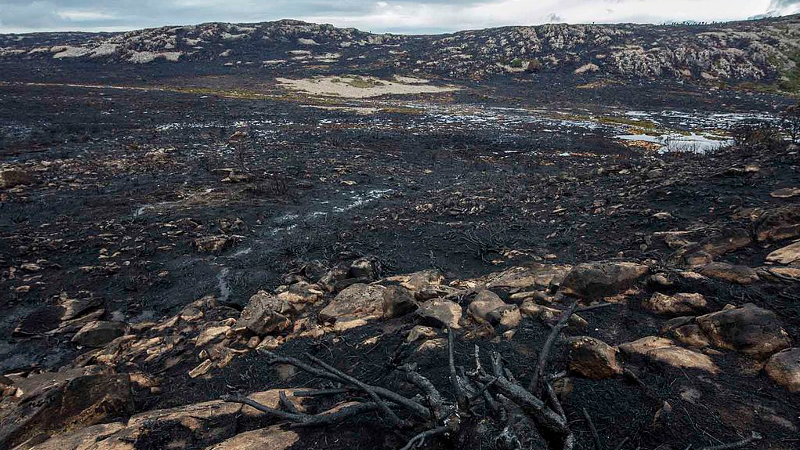 Destruction of Gondwanan refugia by wildfire ignited by lightning storms in 2016. The Gondwana Rainforests of Australia are the most extensive area of subtropical rainforest in the world. (Photo: Rob Blakers)

Our research, recently published in Nature Climate Change, describes a series of sudden and catastrophic ecosystem shifts that have occurred recently across Australia.

These changes, caused by the combined stress of gradual climate change and extreme weather events, are overwhelming ecosystems’ natural resilience.

Australia is one of the most climatically variable places in the world. It is filled with ecosystems adapted to this variability, whether that means living in scorching heat, bitter cold or a climate that cycles between the two.

Despite land clearing, mining and other activities that transform the natural landscape, Australia retains large tracts of near-pristine natural systems.

Many of these regions are iconic, sustaining tourism and outdoor activities and providing valuable ecological services – particularly fisheries and water resources. Yet even here, the combined stress of gradual climate change and extreme weather events is causing environmental changes. These changes are often abrupt and potentially irreversible.

They include wildlife and plant population collapses, the local extinction of native species, the loss of ancient, highly diverse ecosystems and the creation of previously unseen ecological communities invaded by new plants and animals.

Australia’s average temperature (both air and sea) has increased by about 1°C since the start of the 19th century. We are now experiencing longer, more frequent and more intense heatwaves, more extreme fire weather and longer fire seasons, changes to rainfall seasonality, and droughts that may be historically unusual.

The interval between these events has also shortened, which means even ecosystems adapted to extremes and high natural variability are struggling.

As climate change accelerates, the magnitude and frequency of extreme events is expected to continue increasing.

What is ecosystem collapse?

Gradual climate change can be thought of as an ongoing “press”, on which the “pulse” of extreme events are now superimposed. In combination, “presses” and “pulses” are more likely to push systems to collapse.

We identified ecosystems across Australia that have recently experienced catastrophic changes, including:

Of these six case studies, only the Murray River forest had previously experienced substantial human disturbance. The others have had negligible exposure to stressors, highlighting that undisturbed systems are not necessarily more resilient to climate change.

The case studies provide a range of examples of how presses and pulses can interact to push an ecosystem to a “tipping point”. In some cases, a single extreme event may be sufficient to cause an irreversible regime shift.

In other systems, a single extreme event may only be sufficient to tip the ecosystem over the edge when gradual declines in populations have already occurred. More frequent extreme events can also lead to population collapse if a species does not have enough time to recover between events.

But not all examples can be directly linked to a single weather event, or a series of events. These are most likely caused by multiple interacting climate “presses” and “pulses”. It’s worth remembering that extreme biological responses do not always manifest as an impact on the dominant species. Cascading interactions can trigger ecosystem-wide responses to extreme events.

The cost of intervention

Once an ecosystem goes into steep decline – with key species dying out and crucial interactions no longer possible – there are important consequences.

Apart from their intrinsic worth, these areas can no longer supply fish, forest resources, or carbon storage. It may affect livestock and pasture quality, tourism, and water quality and supply.

Unfortunately, the sheer number of variables – between the species and terrain in each area, and the timing and severity of extreme weather events – makes predicting ecosystem collapses essentially impossible.

Targeted interventions, like the assisted recolonisation of plants and animals, reseeding an area that’s suffered forest loss, and actively protecting vulnerable ecosystems from destructive bushfires, may prevent a system from collapsing, but at considerable financial cost. And as the interval between extreme events shorten, the chance of a successful intervention falls.

Critically, intervention plans may need to be decided upon quickly, without full understanding of the ecological and evolutionary consequences.

How much are we willing to risk failure and any unintended consequences of active intervention? How much do we value “natural” and “pristine” ecosystems that will increasingly depend on protection from threats like invasive plants and more frequent fires?

We suspect the pervasive effects of the press and pulse of climate change means that, increasingly, the risks of doing nothing may outweigh the risks of acting.

The beginning of this century has seen an unprecedented number of widespread, catastrophic biological transformations in response to extreme weather events.

This constellation of unpredictable and sudden biological responses suggests that many seemingly healthy and undisturbed ecosystems are at a tipping point.