Merkel: Auto and coal workers need to know what their next jobs are

At a meeting of climate ministers in Berlin, the German chancellor stressed the importance of re-training to help people take part in a greener economy 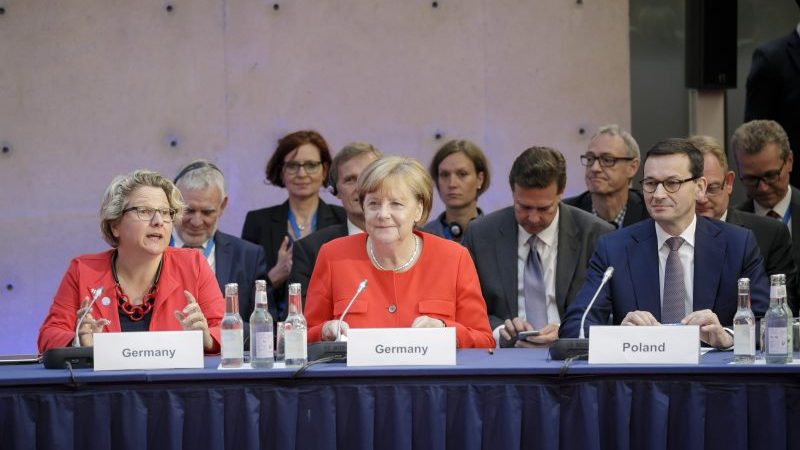 Auto and coal workers need to know what jobs they will have in a new economy, Angela Merkel has told a gathering of climate ministers in Berlin.

Speaking at the Petersberg Climate Dialogue on Tuesday, the German chancellor promised to protect workers in the shift to clean energy.

For the first time, the annual meeting put a focus on the social aspects of climate action, under the heading “changing together for a just transition”.

Merkel assured workers they would not be left behind in Germany’s climate policies: “Changes are going to happen, but we are thinking of you first, and not of the CO2 emissions first…

“If people get the impression that CO2 emissions are considered more important than their fate, we will not have acceptance for our projects.”

Earlier this month, Merkel’s government launched a commission to develop plans for phasing out coal power and boosting the economies of former mining regions.

The commission’s 31 members range from climate campaigners to trade union representatives, in a bid to defuse political tensions over the issue.

Merkel said protecting the rights of workers is one of the “major tasks” that Germany will address within its environmental strategy in the coming years.

She emphasised the role that retraining and learning life-long skills will play in ensuring people can find alternative jobs.

“This is a discourse we need to engage in,” she said. “People really want us to be specific about this. This is why the topic of retraining and life-long learning plays a huge role in our coalition agreement.”

In the past, Germany has taken its time to ensure climate policy, such as phasing out coal, has not compromised job security for employees in the fossil fuel industry.

“It took us more than a decade to shape this transformation in a way that means people do not suffer and we do not lose too many jobs.”

The Petersberg dialogue is an annual gathering of top climate officials from more than 30 countries to boost political cooperation in parallel with formal climate negotiations.

At the end of talks, co-chairs issued a statement calling on negotiators to step up the pace of talks on a rulebook to implement the Paris Agreement, due for completion in Katowice this December.

It emphasised the importance of early action to cut emissions and scale up climate finance to developing countries.

Another element of the discussion was biodiversity, brought to the table by French minister Nicolas Hulot.

He highlighted the importance of a multi-dimensional approach to climate change, considering both economic opportunity and the conservation of natural environments.

“We need to preserve our ecosystems, as this will give them back their capacity to store CO2. Linking both of these challenges is not something we are all doing in our approach right now…

“If we do not stop harming our ecosystems, our soil, we will not win this fight.”

Merkel showed her agreement, saying it was a good idea to “make this connection more visible”.