Sponsored content: The global steel corporation, ArcelorMittal, is accused of not taking environmental responsibility at its plant in Zenica, posing a risk to public health 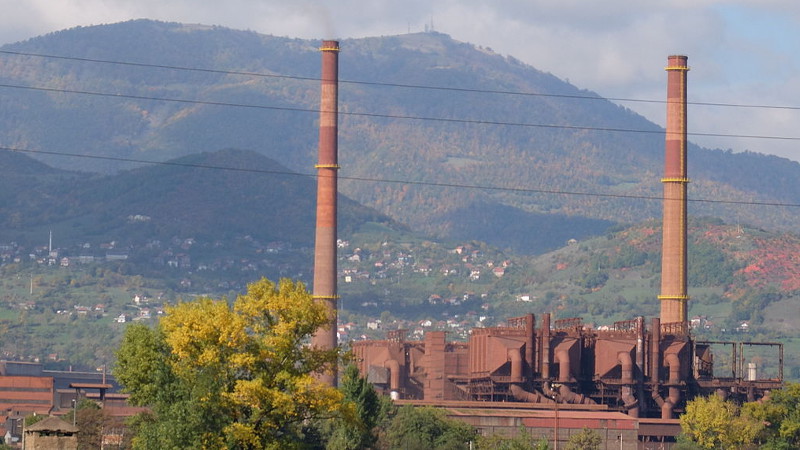 Sasja Beslik, Head of Sustainable Finance at Nordea, recently visited his hometown of Zenica in Bosnia to investigate the impacts of the steel industry, which dominates the city with a huge plant employing around 3,000 people.

The steel is manufactured by one of the world’s largest players in the extractive industry, ArcelorMittal – a company Nordea invests in.

Watch the video from the Sasja’s visit below.

Sasja Beslik, head of group Sustainable Finance at Nordea, travelled to Zenica to investigate the impacts of the steel industry that dominates the city with a huge plant.

Local residents and environmental organisations have complained for years about the high level of pollution in the city, accusing the company of not taking responsibility for the environment.

“It’s a very dirty factory. It produces iron, steel and electricity. And the dust, sulphur dioxide and organic pollutants, benzene and heavy metals being emitted are way over the limits,” says Samir Lemes, a former president of the local environmental organisation, Eko Forum, who is still very active.

On his visit, Sasja Beslik met with Sadin Livnjak, a concerned resident. He lives with his family – his wife and three sons – in Tetovo, just outside the steelworks area. One of his sons suffers from bronchitis, another has problems speaking properly.

“The pollution here is heavy. After eight on Saturdays and Sundays you can’t go outside. No one lets their kids go out, it is totally polluted,” he says.

Ambient air pollution is one of the greatest environmental risks, killing millions around the world every year. It, combined with smoking, which has a high incidence rate in Bosnia-Herzegovina, is at the root of serious medical conditions, like lung cancer and cardiovascular diseases, according to the WHO.

However, valid statistics on the health impacts in Zenica are very poor. No detailed studies have been conducted on the correlation between the air in Zenica and diseases, like cancer.

After eight on Saturdays and Sundays, the air pollution in Zenica is so heavy that kids are left inside. 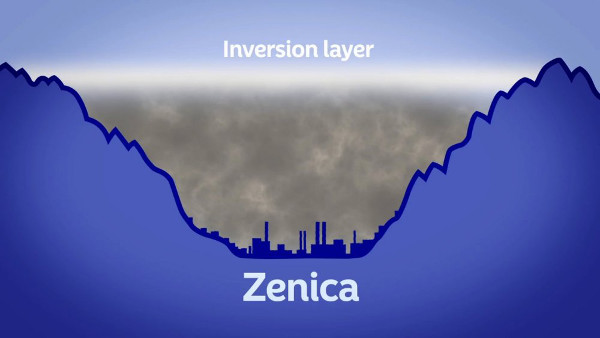 The steelworks are squeezed down into a narrow valley that works as a kind of bowl holding in all the smoke and dust from the chimneys. (Photo: Nordea)

In 2015, Eko Forum filed criminal charges against ArcelorMittal and the federal authorities. This was the first formal accusation of environmental crimes in Bosnia-Herzegovina. But the case can drag on for years.

“The prosecutor’s office doesn’t have the experts to estimate the validity of the proof and documentation accompanying our charges, and they still haven’t made the decision whether they will forward the charges to the court or reject them,” says Samir Lemes.

“We’ve sent two letters asking for information, but the answer is just, “it is still under consideration.””

In March 2017, ArcelorMittal announced a €12.4 million investment in new environmental projects, including the installation of a hybrid filter, which has cut dust emissions significantly to below the EU limit of 20 mg/Nm3. This investment is an important example of their environmental investments of approximately €50 million.

ArcelorMittal’s ambition is to bring all emissions fully in line with EU as well as local standards and progress is being made. In addition to the hybrid filter they have also recently completed the installation of a new coal charging machine in their coke plant that achieves major reductions in smoke and gas emissions. ArcelorMittal Zenica also plans to install a second hybrid filter within the next 16 months so both sinter plant stacks’ dust emissions are filtered.

On this, Samir Lemes says, “in fact, this is only a quarter of the project, since they installed only one filter out of four planned.”

The difference with and without the filter is very visible in this video published by ArcelorMittal.