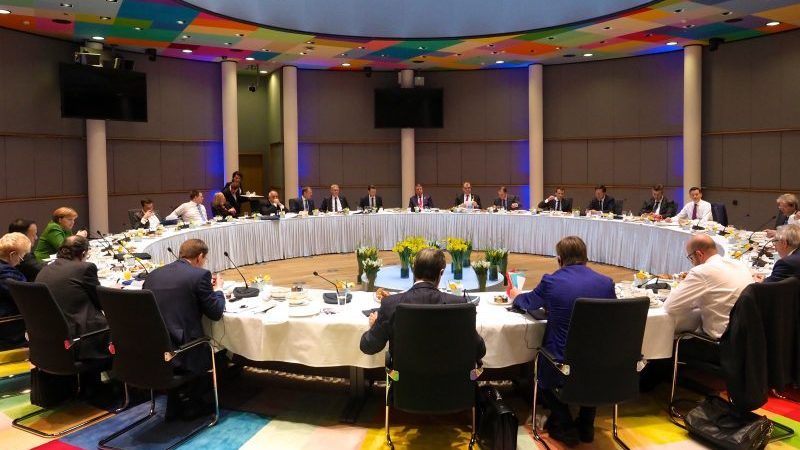 EU leaders have directed the European Commission to produce a long-term climate strategy “by the first quarter of 2019”.

They set the deadline for a 2050 greenhouse gas emissions cutting plan at a European Council meeting finishing on Friday. It will update the 2050 low-carbon economy roadmap drafted in 2011.

Climate commissioner Miguel Arias Canete tweeted there was “no time to lose” as the EU forges ahead with the low-carbon transition.

“It’s hard to succeed on the climate transition unless you know where you’re going,” tweeted Jonathan Gaventa, director at environmental think-tank E3G, adding that the previous 2050 roadmap was “already badly out of date on technology costs”.

The EU has a target to reduce greenhouse gas emissions 80% by 2050, agreed when the international goal was to limit global warming to 2C.

In the Paris Agreement, governments upped ambition, saying temperature rise should be held “well below 2C” and to 1.5C if possible. Noting that voluntary national commitments were collectively inadequate, it created a framework for periodically ratcheting up efforts.

The European Council decision sent “an important political signal,” said Gaventa. “Some within EU institutions had begun to see big climate questions as too difficult and too divisive, and so started to drag their feet. Today’s unanimous conclusions shows the top-level political appetite is there.”

A good long-term strategy will expose the choices that Europe faces. How quickly do we need to transform our infrastructure, our buildings, our industries? What signals do investors need?

Wendel Trio, director of Climate Action Network (CAN) Europe, said: “This is an important step that will set the wheels in motion for raising the EU’s climate target. The new strategy needs to outline what efforts the EU will pursue to keep temperature rise within the 1.5C limit set in the Paris Agreement. This will prove beyond doubt that the current climate target for 2030 is insufficient and trigger its review and increase.”

The latest analysis from the International Energy Agency this week showed EU emissions rose slightly in 2017, for the second year in a row, as renewables deployment slowed.