Did limiting warming to 1.5C just get easier?

Comment: A new report has revised the ‘carbon budget’, apparently putting a 1.5C limit to warming within reach. But how useful is this measure? 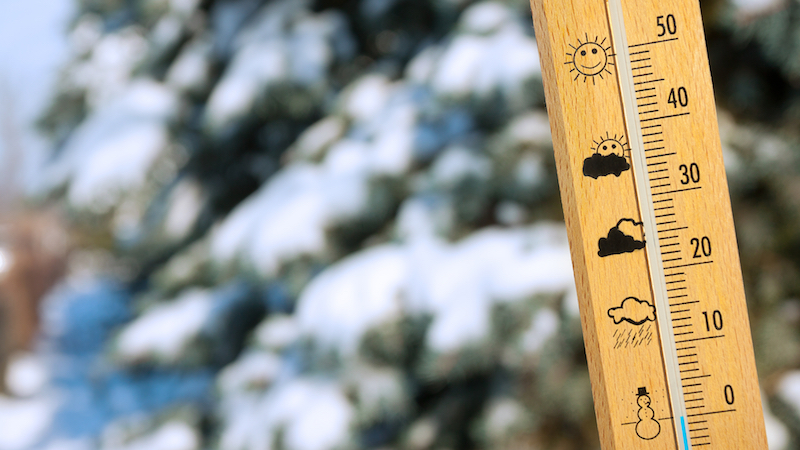 The Paris Agreement aims to keep the world from warming more than 1.5C (Photo: tcsabaDeposit Photos)

Something is wrong with the carbon budget.

The latest report from the UN Intergovernmental Panel on Climate Change (IPCC) suggests the cap on carbon emissions that would keep the world from warming by 1.5C is about 250 billion tonnes CO2 from 2015, and at 2015 emission rates, the carbon budget will be gone by about 2022.

We are currently at around 1C above pre-industrial levels (based on 1870), but can global average temperatures increase about 0.5C in five years?

No. There is an obvious inconsistency with the carbon budgets. A simple back-of-envelope calculation, with rounded numbers, helps explain the inconsistency.

We know that global average temperatures may increase as much as 0.25C per decade, and that would mean it would take 20 years (two decades) to go from about 1C today to 1.5C. Since we emit about 40bn tonnes CO2 per year, that would give a budget of about 800bn tonnes of CO2 if we assumed emissions remained constant.

That very rough ball-park estimate of 800bn tonnes of CO2, is much larger than the 250bn tonnes CO2 suggested in the last IPCC report.

As it turns out, the rough estimate of about 800bn tonnes of CO2 is rather similar to the value presented in a new paper in Nature Geoscience, by Richard Millar and colleagues.

Millar and colleagues find a carbon budget from 2016 to the year 1.5C is crossed of 730bn tonnes of CO2. To give a 66% chance of staying under 1.5C, the budget is 880bn tonnes, assuming ambitious reductions in non-CO2 gases, such as methane, nitrous oxide, and fluorinated greenhouse gases. Using an alternative model approach, they find a budget of 920bn tonnes for ambition reductions in non-CO2.

These carbon budgets are considerably larger than what was published in the last IPCC report, something I wrote about earlier. They are in fact more like what we thought was a 2C carbon budget.

Did the IPCC get it wrong?

Richard Millar also has a guest post at Carbon Brief, which you should read.

The IPCC carbon budget for 1.5C would seem inconsistent with observations, we are currently at about 1C and for temperatures to increase 0.5C by 2022 would seem impossible.

To deal with this apparent inconsistency, Millar and colleagues shift the axes of the well-known model-based IPCC cumulative emission figure. The figure below shows the original figure (left) and the updated version (right). 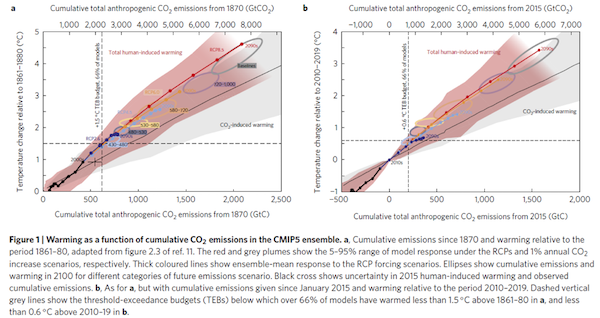 Instead of starting the models in 1870 and hoping they line up with observations in 2015, they shifted the origin of the figure to 2015, so observations and models agree. The clock is reset to 0C in 2015.

To determine the warming from 1870, they use only the warming attributed to anthropogenic activities (ignoring volcanoes and solar variability), which they estimate as 0.93C based on Otto and colleagues and reconfirmed in this study.

They also change the preindustrial baseline to 1861-1880, instead of 1850-1900. The change in baseline makes a small difference, but others have suggested changes in the opposite direction.

The shift of the axes makes a world of difference. It makes the stars align. The budget is now consistent with when we expect 1.5C to be reached, in 20 or so years!

While one could argue the pros and cons of a shift in axes, the shift makes the carbon budget to exceed 1.5C consistent with expectations.

But, this is not the full story, because we want to stay below 1.5C.

For politics, the stakes are high. Just ponder these two potential outcomes:

I seriously hope they have this right, or at least, I hope they will be vocal if they revise their estimates downwards.

For science, I can’t help but frame the paper in two ways:

I have written a lot about carbon budgets in the past, so I feel rather confident of my understanding. But, I am a small fish compared to the authors of this paper.

On the first point, I already have serious reservations with the IPCC carbon budgets, mainly because of uncountable inconsistencies. Since the authors modify something I don’t really trust in the first place, then I am a little cautious of the findings. But, if the climate system behaves as we thought, then careful accounting should allow us to reconcile the difference between the original and updated carbon budgets. Science has made progress.

On the second point, the paper is going to have ripple effects. If their adjustments are correct, then those adjustments may cause inconsistencies elsewhere. Do we have the climate sensitivity wrong? Some argue that committed warming and aerosols would push us over 1.5C. My mind boggles at the potential implications if the second point is realised.

Because of the political and scientific implications of this paper are so immense, it will need a rigorous assessment by the scientific and policy communities. That is going to take time, perhaps years.

Science is slow. Blogging is not, and I will come with a few technical comments in the next week or so.

So what about 2C? Millar and colleagues do not discuss carbon budget for 2C or “well below 2C” as in the Paris Agreement. Some may argue this is a rather important omission.

I have argued previously that 0.5C makes a big difference to the carbon budget, and this is consistent with the IPCC carbon budgets.

One would expect that the difference between 1.5C and 2C carbon budgets would be consistent with earlier work, and rather importantly, this follows directly from the linear cumulative emissions relationship.

Given that the emission pledges submitted to the Paris Agreement are somewhat around 2.5C to 3C across most studies, then the updated carbon budgets would imply 2C is roughly consistent with the current emission pledges.

This is something that will make policy makers happy, but let’s hope they have these numbers right!

What to do in the short-term? Whilst the carbon budget is a brilliant concept, it has many challenging issues as outlined in my previous posts.

The carbon budget concept is a brilliant way to illustrate the importance of zero emissions, the need for rapid mitigation, and to compare different temperature targets. We need it for that.

The IPCC consensus view indicates the carbon budget for 1.5C is around 250bn tonnes of CO2 from 2015.

One thing this paper has convinced me, is that the carbon budget concept is just simply too uncertain to be of any practical use in policy.

What do I tell a policy maker? It is best to say we need net-zero emissions by 2050 to 2100, as specified in the Paris Agreement. Problem solved, carbon budget not needed.

Glen Peters is a senior researcher at the Centre for International Climate and Environment Research – Oslo.

The study will probably lead to considerable confusion in the climate policy arena, for several reasons.

First, it is quite unusual that scientists say that the state of the climate is better than expected, that a recalculation of the remaining carbon budget gives us more breathing room, not less.

Second, it is far from clear that the authors’ method/results will form a new scientific consensus, given that some researchers are already voicing objections. A significant carbon budget recalculation should not come as a surprise, but for many policymakers it will.

While the carbon budget is a credible scientific concept, it shows a certain weakness when it comes to political utility. The carbon budget uncertainty range for a given temperature target is quite large, numbers are based on several assumptions usually unknown to policymakers.

We cannot expect that policymakers are really willing to change their plans and actions following a new IPCC consensus, let alone single papers.

This might not be problematic in case of an unexpected budget extension (unless policymakers would misunderstand this as a good reason for leniency), but what if researchers would cut the remaining budget further down? Could we really expect policymakers to develop more ambitious plans immediately?

To guide policy, it would be better not to focus on avoiding more or less exact thresholds (like 1,5 or 2C), which are subject to future carbon budget recalculations that might confuse policymakers, but to target human activity, i.e. emissions.

Emissions have to go down to net zero (and net negative, eventually) if the world wants to reach ambitious temperature targets like 1.5 or 2C. This does not change if the remaining carbon budget is somewhat smaller or larger than previously calculated.

Oliver Geden is head of the EU research division at the German Institute for International and Security Affairs.