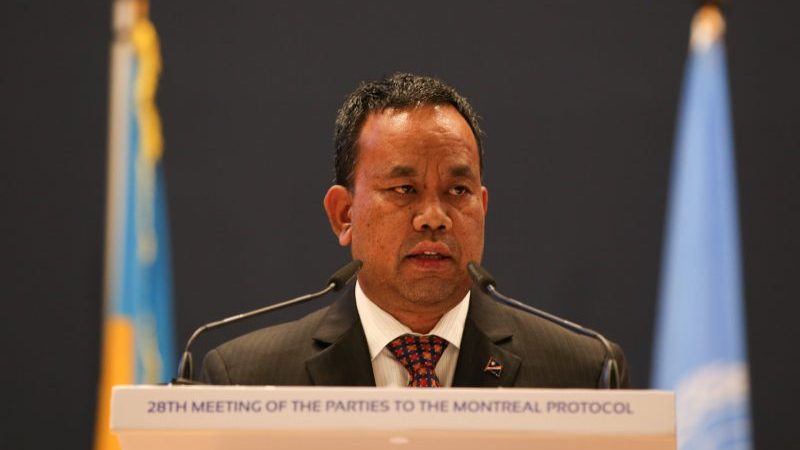 Mattlan Zackhras, a leading Marshall Islands climate advocate, died aged 47 of heart failure at a hospital in Taiwan on Tuesday.

As minister-in-assistance to president Hilda Heine for the last 19 months, Zackhras was a convenor of the “high ambition coalition” in international climate talks.

Representing one of the most vulnerable countries in the world to sea level rise, he kept up pressure for tough climate action following the 2015 Paris climate summit.

President Heine sent her thoughts and prayers to Zackhras’ family and friends, in a short statement. “Minister Matt worked tirelessly, at home and abroad, on behalf of the Marshallese people and the Islands that he loved deeply. He will be greatly missed,” she said.

Shocked and saddened about untimely passing of our friend Minister Mattlan Zackhras from Marshall Islands. Condolences to family and friends

Deepest condolences from @EUPasifika. Minister Zackhras was a powerful advocate for #climateaction and a close ally. https://t.co/89sgNmOmdR

Another angel gained in the heavens above and watching over the RMI and his family. RIP, Honorable Minister Matt Zackhras. ❤️🇲🇭

The passing of Minister Zackhras is a heavy loss to the RMI. My thoughts and prayers of love & comfort are with his family ❤️

Zackhras had represented Namdrik Atoll in parliament since 2003, following seven years as a diplomat in Washington DC.

“Matt was one in a million,” Tamara Greenstone Alefaio, who worked with him at the University of the South Pacific Campus in Majuro, told RNZ.

“His passion for the future of the Marshall Islands was evident in everything he did. Whether it was the care he took in supporting USP’s weaving program and science camps, or simply the fact that he always had time for everyone, he inspired us all for conservation and climate issues.”