This G20 will be remembered for division, not unity

Comment: Efforts in Hamburg to rally 19 countries to the Paris Agreement were successful, but deeper ambition feels further away 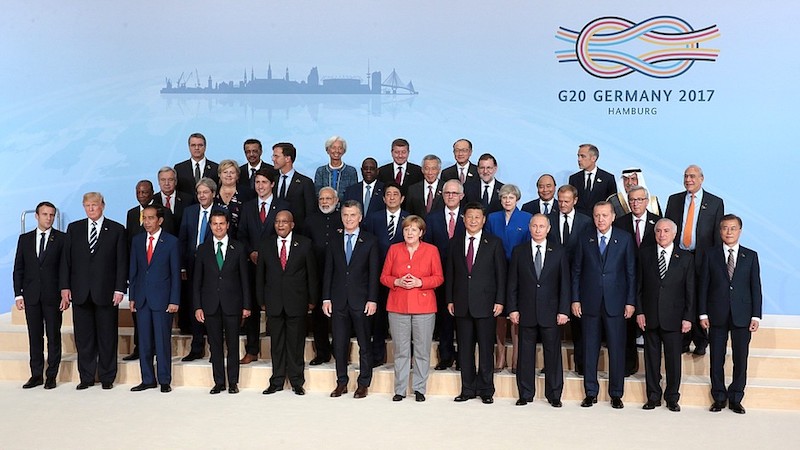 G20 leaders gathered in Hamburg but left divided over climate by the US (Photo: Office of the Russian president)

The G20 meeting in Hamburg saw grave risks to the momentum of global climate action, posed by the withdrawal of the US from the Paris Agreement, and US efforts to ‘peel off’ other less committed nations.

The worst was averted as 19 out of 20 global leaders reaffirmed their recognition that there is no turning back from the need to take action on climate change, the opportunities this presents and stressed their determination to stand firm on the aims of the Paris Agreement. But, although the global framework for climate action survived, much more still needs to be done.

Overall, the G20’s final outcome document demonstrates how isolated the Trump administration has become, particularly where climate action is concerned.

The meeting’s German presidency worked hard to ensure that the other 19 major world economies maintained their complete backing for the Paris Agreement  making it clear that the landmark climate deal was ‘irreversible’.  In terms of the international recognition of the seriousness of the global challenge of climate change it is at least somewhat encouraging that it was the issue of this summit.

The US had wanted the communiqué to include language on behalf of all G20 nations that support would be forthcoming to help other countries ‘access and use fossil fuels more cleanly and efficiently’ but this, fortunately, was avoided. Instead any pressure to turn the clock back and depend on carbon intensive fuels has been acknowledged as a unilateral, backward move on behalf of an isolated state. This marks an important and significant success in containing the damage that the US position continues to cause.

Before the summit, France took the lead in signalling that real climate action is unstoppable and will continue with its eye-catching announcement on ending the sale of diesel and gasoline vehicles by 2040 and after with the announcement that it would hold a summit to mobilise public and private finance behind the goals of the Paris Agreement in December 2017 .

Chancellor Angela Merkel’s effective facilitation to achieve the strong consensus of the other 19 nations in the final communiqué that the Paris Agreement on Climate Change is irreversible was crucial.  In the run up to the G20, reports indicated the US had been making determined efforts to avoid becoming isolated at the summit in the way they had been in the recent statement by G7 environment ministers – specifically by attempting to persuade countries such as Saudi Arabia, Turkey, Indonesia and Russia not to give strong backing to the Paris process. Under the circumstances achieving unified language of the so-called ‘G19’ behind the Paris Agreement was a considerable success.

There have, however, been costs. The intention for the G20 to signal the need to increase ambition in national climate action plans did not make it into the final communiqué. This is unfortunate, as the Paris Agreement, although a breakthrough, was insufficient on many fronts.

Countries’ plans for action set out in their ‘nationally determined contributions’, as currently formulated, only take us about one third of the way on the emissions reductions we need to be on course for a 2C world. And the world needs 1.5C to be the clear, achievable target limit for temperature rise to be remotely safe, particularly for the poorest countries. The brutal fact is that the world’s climate will not stay within safe limits unless Paris provides a framework for increasing – not decreasing – ambition. That is why the actions of the US are so deplorable.

The final communiqué represents a real success under the circumstances. But it is telling that in the end it will be remembered for division – the G19 against the US on climate – rather than for unity of purpose.

At Hamburg arguably that was the game.  Multiple bilateral meetings were more important to many individual leaders than the collective outcome.  We are in a new era when no one bloc of nations can shape global events.

For climate action the future directions are clear. The global inter-governmental process is key and survives in robust shape after the successful isolation of the US at Hamburg. But action at all levels will be needed more than ever – in business, local government and civil society as well as by nation states.

The US government’s intention to withdraw or renegotiate the Paris Agreement is a serious setback.  But the fact that in the US, companies, cities and state governments remain committed to the agreement because they recognise it makes economic sense, has the potential to keep the US on track. California governor Gerry Brown is rallying action at the state level, showing leadership by announcing a climate action summit to take place in September 2018.

Germany now has the opportunity to work with the next G20 presidency, Argentina,  to get concrete actions agreed that will move domestic ambition forward both in terms of reducing emissions, and increasing climate finance for vulnerable countries. Support, in particular, for the 47 least developed countries in both expanding access to energy for their populations through renewables, and dealing with the damage caused by accelerating climate change, will be crucial for global momentum for climate action.

Andrew Norton is director of the International Institute for Environment and Development (IIED).