After floods, Peru has an opportunity to rebuild smarter

Comment: Facing an enormous clean-up job, Peru must think about a future where flood like those in March become ever more common 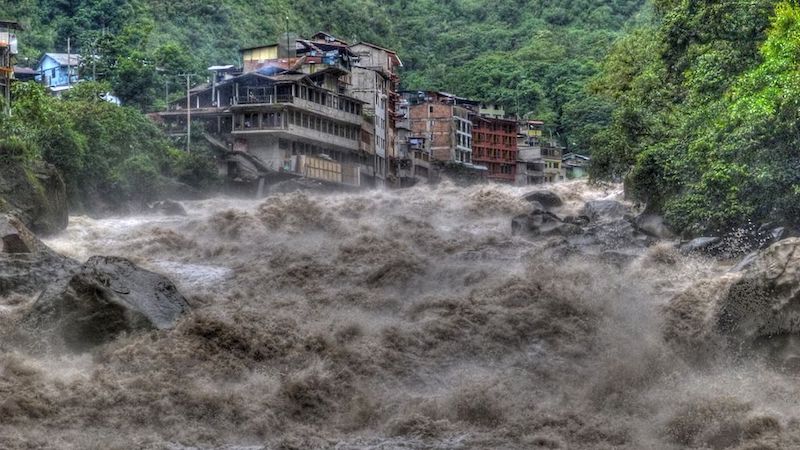 The Urubamba river, below Peru's Machu Picchu rages through the town of Aguas Calientes in 2012 (Photo: Aufgang)

In the wake of powerful rains that led to devastating floods and mudslides, Peru’s president Pedro Pablo Kuczynski says the country should expect more such devastating weather events.

Peru’s reconstruction from the tragic events of recent weeks can help to prepare for this new reality.

More than 100 people have died and over 150,000 are homeless across vast swaths of the country. Thousands of kilometres of roads and over 240 bridges have been destroyed. The cost of reconstruction is said to be around $6 billion, more than 3% of Peru’s GDP.

The unprecedented scale and destruction of the rains surprised many. Peru had been preparing for a big El Niño last year which never came. The phenomenon which brings warm currents across the Pacific to the Americas instead manifested itself as a localised version called a coastal El Niño.

A cocktail of factors has ensured the floods caused maximum damage. The rapid growth of urban areas in recent decades has increased their vulnerability to floods. Whole neighbourhoods have often been built illegally in highly vulnerable areas close to rivers and streams. Drainage and sewage systems in many places have failed to keep up with the rising population.

The Peruvian government has set up a fund of $770 million to help victims and begin reconstruction, which follows a stimulus package worth 5.5 billion soles ($1.7 billion) focusing on building infrastructure. Peru is set to begin a three-year rebuilding program that includes the construction of thousands of earthquake-proof houses in areas less prone to flooding. Kuczynski said that the plan may include 150,000 new homes for low and middle income families, and a major expansion of water and sanitation systems.

Peru’s Private Investment Promotion Agency (ProInversion) also recently announced a new legal framework for public-private partnerships which is intended to accelerate the reconstruction of some of the worst hit areas.

The reconstruction effort comes at a very testing moment as prosecutors investigate a corruption scandal which has ensnared the Brazilian construction giant, Odebrecht, which secured billions of dollars worth of public contracts in Peru in recent decades.

However, extreme weather won’t wait. Investment in energy, buildings, and sanitation infrastructure must now factor in climate risk including more floods. The role of natural infrastructure such as forests and the ecosystem services they provide including preventing mudslides by stabilising the soil with their roots also requires greater attention.

To increase resilience against extreme weather events, deliver on the sustainable development goals and Peru’s commitments to the Paris Agreement, and to secure private sector investment required to boost growth, the government must prioritise sustainable infrastructure.

Investment is needed to modernise Peru’s waste, sanitation, energy and transport systems. Maintaining and upgrading city drainage systems can ensure heavy rains flow safely out of urban areas instead of forming rivers which cascade through streets and houses.

The benefits of sustainable infrastructure are impressive. The focus on sustainability means ensuring that infrastructure is compatible with social and environmental goals, such as reducing air and water pollution. Alternatively shoddy infrastructure can cause fatal respiratory illnesses from air pollution or simply get washed away.

The Global Commission on the Economy and Climate says that low-carbon investments in the building, transport and waste sectors can generate massive global savings with a current value of US$16.6 trillion in the period to 2050. With 70% of the forecast increase in emissions from developing countries such as Peru likely to come from infrastructure that is still to be built, decisions taken now will determine whether the Paris climate agreement’s goal of staying below 2C remains viable.

To secure the necessary levels of finance Peru’s government needs the private sector, yet it may struggle to get its backing. Given the long life of infrastructure assets, including roads and bridges, investors are wary that projects that fail to factor in climate risks could be end up being damaged or destroyed resulting in substantial losses.

The Peruvian government, with international support, must protect its citizens from the increasing number of climate-related disasters. Prioritising sustainable infrastructure is critical to build that resilience which can both save lives and bring significant economic benefits.

Guy Edwards is a co-director of the Climate and Development Lab at Brown University.