Comment: An Indian state has awarded full legal status to an entire ecosystem. But can such a right be protected? 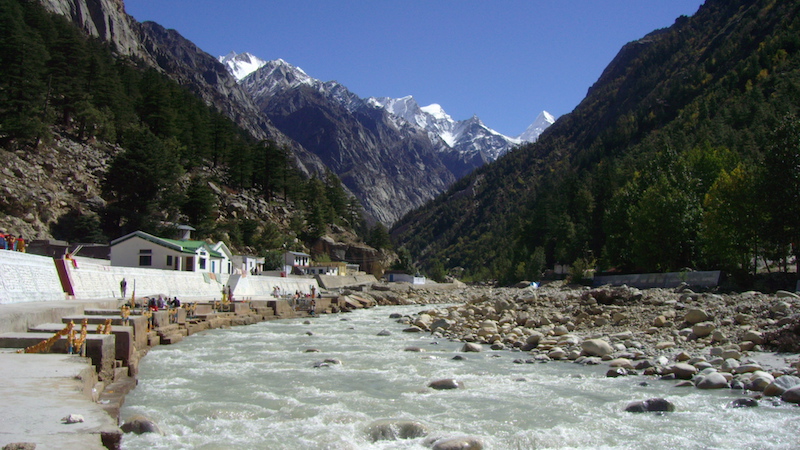 The Bhagirathi River where it flows through Gangotri, Uttarakhand. The Indian state's high court has just issued the river, the glaciers that feed it, its wellsprings and the entire ecosystem the legal rights of a person. (Photo: Atarax42)

Expanding on a previous judgment in which it recognised the Ganga and Yamuna rivers as legal entities, the High Court of the Indian state of Uttarakhand now grants legal rights to the ecosystem.

In a broad ruling on March 30, 2017, the High Court of the Indian state of Uttarakhand stated:

We, by invoking our parens patriae jurisdiction, declare glaciers including Gangotri & Yamunotri, rivers, streams, rivulets, lakes, air, meadows, dales, jungles, forests wetlands, grasslands, springs and waterfalls, legal entity/ legal person/juristic person/juridicial person/ moral person/artificial person having the status of a legal person, with all corresponding rights, duties and liabilities of a living person, in order to preserve and conserve them. They are also accorded the rights akin to fundamental rights/ legal rights.

This followed from an order on March 20, 2017 – startling in itself – in which the Uttarakhand HC had declared the Ganga (Ganges) and Yamuna rivers as legal entities based on the fact that they are considered sacred to Hindus. Based on that order, a group of citizens had petitioned the court that the “Himalayas, Glaciers, Streams, Water Bodies etc. [be declared] as legal entities as juristic persons at par with pious rivers Ganga and Yamuna.”

A much more comprehensive order

The earlier order, 12 pages in length, dealt primarily on whether the state of Uttarakhand had the powers, under a federal constitution, to direct the central government (according to the order, it did) and whether rivers, as sacred entities, could be considered legal entities under Indian law.

This second order, 66 pages in length, is focussed on the ideas of parens patriae as a juridical concept for the states within a federal structure defending their environment, and cites, in a comprehensive manner the idea that nature has rights. The judgement spends six pages citing quotations from a book, “Secret Abode of Fireflies: Loving and Losing Spaces of Nature in the City”, which the judges have quoted from before in a case involving forest fires and forest management.

There is a chapter on the rights of nature by Vikram Soni & Sanjay Parikh that the judgment cites at length, then goes on to detail the special flora and fauna, including endangered species found in the Hindu Kush Himalayan region.

The judgment then goes on to quote, in full, two important UN declarations that form the bedrock of international environmental agreement, namely the 1972 Stockholm declaration and the 1992 Rio Declarations. It also quotes the Convention on International Trade in Endangered Species of Wild Fauna and Flora, signed in 1973, as well as the Bali Action Plan, formulated in 2007.

The judgment acknowledges the passage of the “‘Te Urewera Act 2014’ whereby the ‘Urewera National Park’ has been given the legal entity under Section 11 of the Act,” while building up to the argument that, “The Courts are duty bound to protect the environmental ecology under the ‘New Environment Justice Jurisprudence’ and also under the principles of parens patriae.”

The judgment then spends another 15 pages quoting American jurisprudence on the use of parens patriae – the guardianship of the state of the rights of entities that are unable to fight for their own rights – by states within a federal structure, to assert their rights when their rivers have been polluted, or diverted, or their environment has been otherwise harmed. There is no reference to the use of such law within India.

In some ways it seems that the Uttarakhand HC is anticipating the way that the role of environmental practice is going. Just as human rights expanded from “civilised people” to all humans, and then came the movement to abolish slavery, women’s suffrage, give rights to animals, the process towards whole ecosystem rights seems well underway.

In its judgments the Uttarakhand HC emphasised more than once that the river was a living entity, and dependent on glaciers, waterfalls and other natural aspects. It would be impossible to protect one aspect without protecting the whole.

Nor would India be the first country to extend these rights. While New Zealand passed legislation only recently giving legal rights to the Whanganui river ecosystem, Ecuador had already given legal rights to nature in its Constitution adopted in 2008.

In fact the first enunciation of such legal rights of nature happened in the famous Sierra Club v. Morton case of 1972, in the US (which the Uttarakhand HC does not cite). While the judgment went against the Sierra Club, in his famous dissent US Supreme Court Justice William Douglas stated:

Inanimate objects are sometimes parties in litigation. A ship has a legal personality, a fiction found useful for maritime purposes. The corporation sole – a creature of ecclesiastical law – is an acceptable adversary, and large fortunes ride on its cases. The ordinary corporation is a “person” for purposes of the adjudicatory processes, whether it represents proprietary, spiritual, aesthetic, or charitable causes.

So it should be as respects valleys, alpine meadows, rivers, lakes, estuaries, beaches, ridges, groves of trees, swampland, or even air that feels the destructive pressures of modern technology and modern life. The river, for example, is the living symbol of all the life it sustains or nourishes — fish, aquatic insects, water ouzels, otter, fisher, deer, elk, bear, and all other animals, including man, who are dependent on it or who enjoy it for its sight, its sound, or its life. The river as plaintiff speaks for the ecological unit of life that is part of it. Those people who have a meaningful relation to that body of water – whether it be a fisherman, a canoeist, a zoologist, or a logger – must be able to speak for the values which the river represents, and which are threatened with destruction.

Unfortunately the dissent by Justice Douglas is only one of the things that the Uttarakhand HC judgment overlooks.

The first is the example of what has happened in cases where rights have been thus granted. In Ecuador, while there have been some small victories under the new constitution, there have been many more failures, including development in areas that would lead to extinction of species. Even when nature’s rights are embedded in the constitution it seems that states will overlook them, or interpret them flexibly, in the case of economic development.

The second gap is the way that the application of parens patriae has turned out in practice in India. In the most (in)famous such case, of the Bhopal Gas Tragedy in 1984, which led to thousands dead, and many more than that injured, and land contaminated, the Indian government forcibly inserted itself using the parens patriae clause. This was a “disaster” for the case, one anticipated as early as 1988, and with continued failure.

In its wisdom the Uttarakhand HC has declared certain people in charge of protecting the new rights granted to ecosystem. Given the experience of Bhopal, it is legitimate to ask why the government will perform better in this case than before.

Who, precisely, will be prosecuted?

More troubling, though, is the question of who will be acted against when the “rights” of these entities are compromised. The judgment mentions that the glaciers are receding, including due to global warming. Will the officers then place cases against those contributing CO2 or other greenhouse gasses to the atmosphere? The fear is that the government and its officers are more likely to act against the poor and marginalised.

As Prakash Kashwan notes in his book, Democracy in the Woods: Environmental Conservation and Social Justice in India, Tanzania, and Mexico, India developed strong forestry laws primarily during the colonial period which deprived forest dwellers of their lands and rights. This has continued in post-independence India.

The judgment tries to balance this by giving the chief secretary of Uttarakhand the ability to co-opt, “seven public representatives from all the cities, towns and villages of the State of Uttarakhand to give representation to the communities living on the banks of rivers near lakes and glaciers”. Going by the history of environmental action that Kashwan documents, these are likely to be privileged groups, not those already marginalised.

It does not help that the judgment includes the directive, “The District Magistrate, Haridwar is directed to ensure that the Beggars are not allowed to be present on the Ghats.” Is it only the poor that will be prosecuted?

Lastly, the judgment, like the one that preceded it, does not clarify anything about what exactly is to be “preserved”. Will dams be removed, irrigation systems dug up? Will the ambitious river interlinking project of the central government be opposed, since so many experts have pointed out that it is catastrophic to the health of the rivers?

The order is so broad as to encompass everything, “Plucking of one leaf, grass blade also damages the environment universally.” This is a recipe for confusion, not clarification, and confusion is of no real help to the environment.

This article was originally published on The Third Pole.