The frontline of the dirty air crisis, where no-one keeps a record 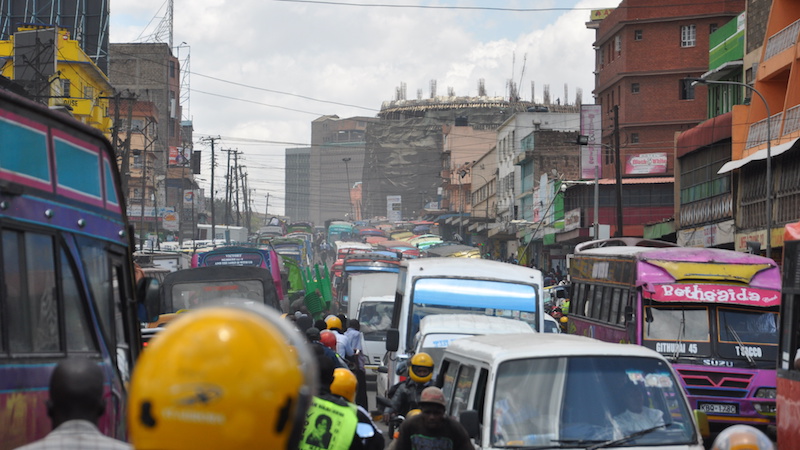 By Karl Mathiesen in Nairobi

Every day, Mary Wanjiru’s lungs record a public health crisis to which her government has paid little attention.

She has sold vegetables beside Nairobi’s Kariokor roundabout for seven years. Cars and minibuses grind through the intersection where four clogged arteries meet in this chronically congested city. She sits on a roadside patch, her nose and mouth level with the exhausts that shudder and belch just a few metres away.

Wanjiru developed asthma when she moved to Nairobi as a 23-year-old – she is now 45. Her medication keeps the condition pretty much under control.

“It doesn’t happen as much, but when it is cold or when the air is really bad,” she says in Swahili and through an interpreter. She knows the pollution is no good, but “there is no other space to have the stall”. 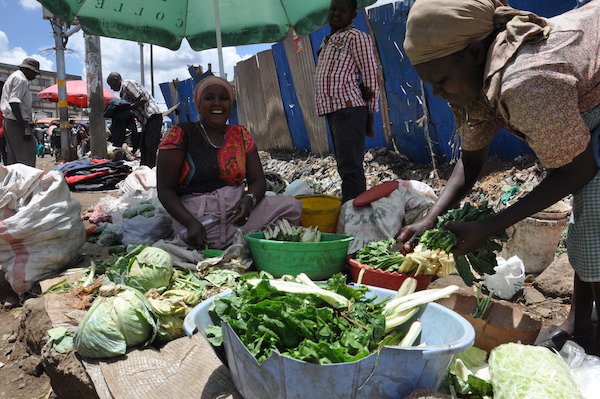 It’s impossible to know just how bad the long term impacts of Wanjiru’s workplace will be for her. Exposure has different effects on different people. If pollution levels were known, then an educated guess could be made, but at Kariokor like everywhere else in this choking city, the air goes unmonitored.

Yet respiratory infections are Kenya’s biggest cause of illness and, according to Victor Nthusi, a scientific associate with the UN Environment Programme (Unep), health ministry statistics show the problem is getting worse. The overwhelming majority of cities in Africa are a blank space wherein the public have no data on the impact of traffic, factories, cookstoves and the fires of cottage industry.

“No-one ever complains about the pollution because you can’t see it,” says Nthusi. “So part of the strategy around tackling the issue is advocacy. Letting people access the information, make sense out of it… and try to get the message home.” 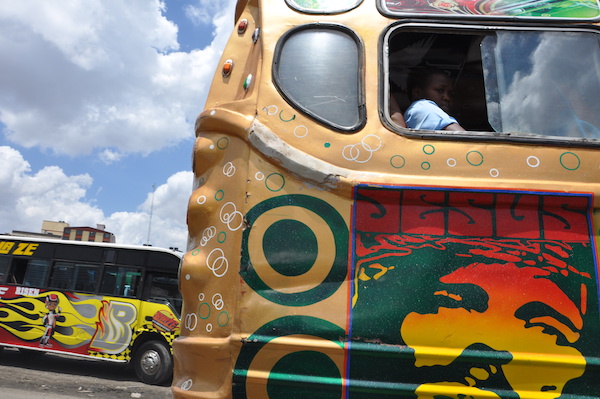 Most Kenyans ride with the windows down, exposing themselves to a cool breeze… and the fumes of diesel and petrol (Photo: Karl Mathiesen)

Exploratory studies conducted by Unep have found Kariokor is one of the most polluted places in Nairobi. Nthusi says living and working beside the roundabout “might shorten your life expectancy and it would definitely have an effect on your health”.

Climate Home asks Wanjiru if she knew about the Unep studies – which were reported in the local press. She shakes her head. Does she think the government will help? She laughs. “Maybe,” she says.

Across the roundabout, an informal rubbish dump along the banks of the Nairobi river, which runs black, has been set on fire. The smoke drifts into the mechanics shops that line the side of the Ngara Ring Road. Again, just metres from the gridlock, dozens of men spend their days breathing the cocktail of smoke and traffic fumes.

Simon Ngunzi Kisko, 38, has repaired rubber bushes – the little pads that sit in a car’s suspension – in a roadside shack here for 17 years.

“Sometimes there are trucks, the ones that dump the garbage. They have a very faulty exhaust that emits fumes that makes us very worried,” he says, also in Swahili. 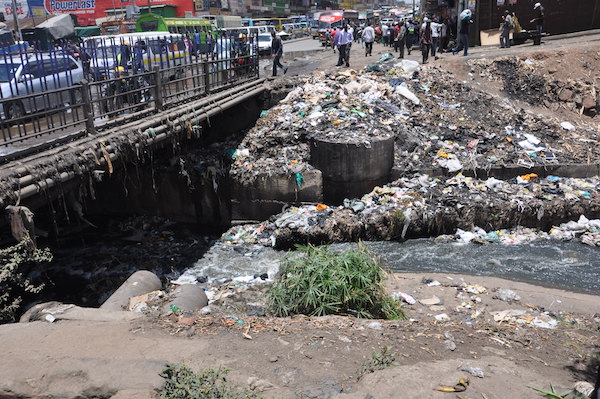 In 2005, Kisko checked himself into a nearby US-run medical centre, convinced he was suffering from tuberculosis. But he was diagnosed with a respiratory disease likely caused by pollution. “I recovered, but sometimes I feel the smoke is choking me. I feel my chest is closed up,” he says.

He sees the same problems affecting his workmates, but the men rarely talk to one another about their health. “That’s a personal thing,” he says.

Despite their suffering, Kisko says he is surprised to learn that Kariokor is among the most polluted places in Nairobi. Although this may reflect less his view of Kariokor, than his general experience of Nairobi’s air.

He is sceptical of whether a monitoring programme that informed the public would make a difference.

“Either way, we have no way of advocating for better, cleaner air. Often the county government overlooks our concerns,” he says.

Kisko may have reasons to feel disenfranchised, but the Kenyan constitution provides him with the right to a clean environment. Nthusi says: “Even the guys at Kariokor may not know it, but… they can demand that right from their immediate representatives or the national government.” 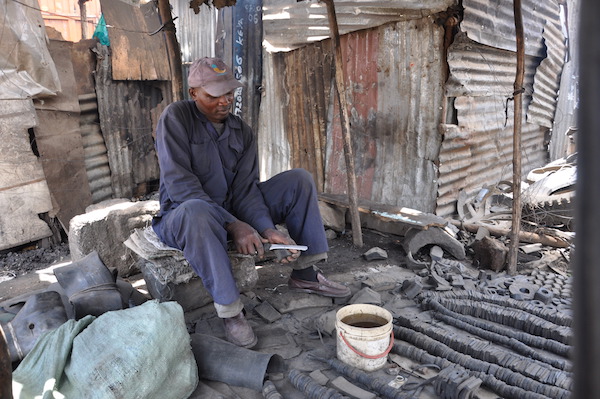 “I feel my chest is closed up.” Simon Ngunzi Kisko works in this mechanics shop beside the Kariokor roundabout (Photo: Karl Mathiesen)

Kenyans are in no way alone. Globally, outdoor air pollution kills more than 3 million people every year. Yet more than one billion people remain in countries that do not monitor the air.

History elsewhere suggests that when citizens gain information about air pollution, political action follows. In Beijing and Delhi, citizens who had lived for years with obvious, choking smogs, were galvanised by figures that showed their cities’ air exceeded World Health Organisation limits by many, many times. These paved the way for regulations on coal and transport that also benefited the global fight against climate change by simultaneously cutting carbon emissions.

In Kenya, the government is showing signs it may be beginning to take the crisis seriously. Air quality regulations have been in place since 2014. An air pollution committee has been formed within the national environment ministry, although committee members said they would not speak to Climate Home publicly. 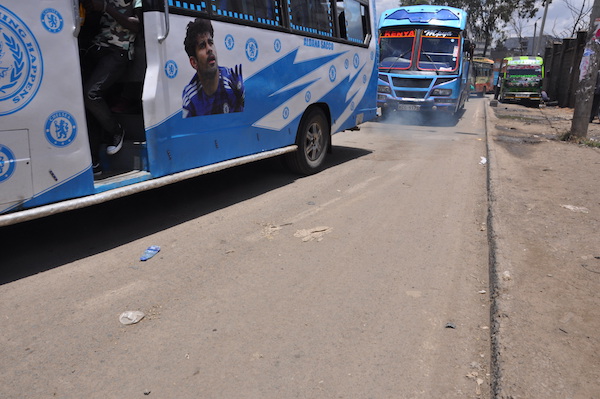 Owners of minibuses – known as matatu – decorate them in order to attract customers. These are often some of the most visibly polluting vehicles on Nairobi’s streets. (Photo: Karl Mathiesen)

According to Nthusi, the committee has approached Unep for input on a programme that would include some form of monitoring. The initial purchase costs for monitoring equipment have fallen ten-fold as new, less precise units designed for developing country budgets have been developed. But in Kenya, “whether or not it happens in the short term remains to be seen,” he says.

No matter how fast political action comes, it will be too late for Nelly Lisimba. She never did look after her asthma, says her brother Hillary, despite regular bouts triggered by cool air and pollution. When she died at just 26, Lisimba says his grief was shot through with guilt.

“I’ve always blamed myself for that loss, because I happened to know how to manage my asthma from a very young age. And for some reason I did not take time to do the same for my sister,” he says. “I always feel like I let her down in a way.” 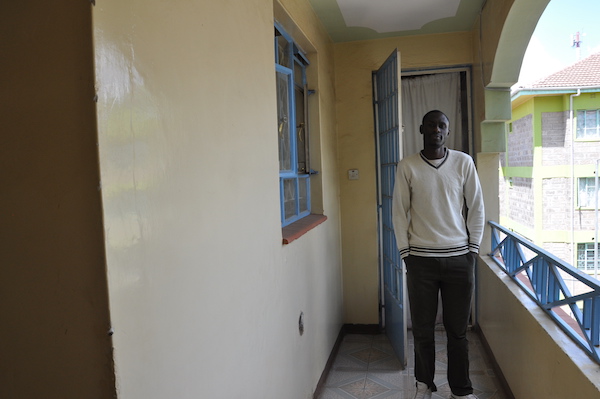 “I feel I lost one, but I can save one hundred.” Hillary Lisimba at his office on the outskirts of Nairobi (Photo: Karl Mathiesen)

Lisimba now leads the nascent Living with Asthma Foundation, a Facebook group and would-be NGO that aims to spread public information about managing the disease.

While triggers for attacks vary, air pollution is a common cause. “The problem is people don’t exactly know these things until you have figures and they actually show you this is bad,” he says. “If we can’t manage these companies, and their pollution, we need to manage the people – who are more than these companies.”

He says a public notification system – an app or social media account – that could give real-time readouts for pollution would make a big difference for sufferers and have political consequences.

“I feel I lost one, but I can save one hundred,” says Lisimba. “No-one should die from asthma.”