More than 1,000 companies are backing an ad campaign warning that an anticipated rollback of green regulations will harm the US economy 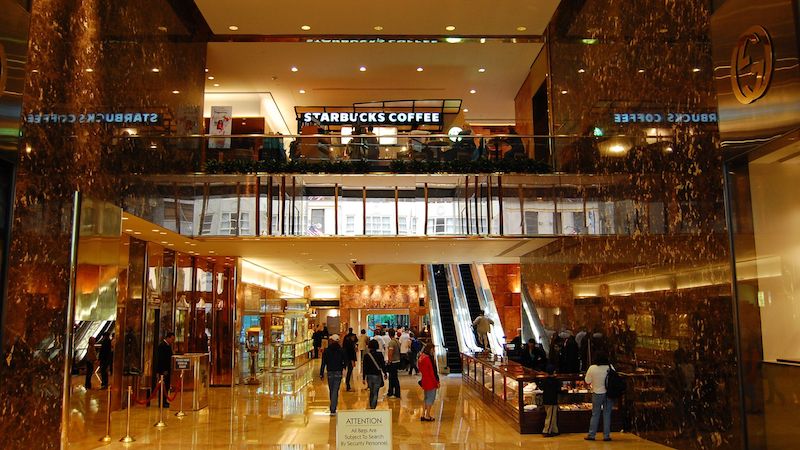 Starbucks, which has a store in the atrium of Trump Tower in New York, has called on the president to keep the US' commitments to a low carbon economy. (Photo: Fletcher6)

More than two dozen Fortune 500 companies joined roughly 1,000 others in signing a letter addressed to Trump, Congress and “global leaders”. Together they have a revenue of more than US$1.2 trillion, according to sustainable investor network Ceres.

The letter said a low carbon economy could be “cost-effective” if policies supported energy efficiency and the transition of the energy system.

“Failure to build a low-carbon economy puts American prosperity at risk. But the right action now will create jobs and boost US competitiveness. We pledge to do our part, in our own operations and beyond, to realise the Paris Agreement’s commitment of a global economy that limits global temperature rise to well below 2 degrees Celsius,” it said.

The letter was placed as an advertisement in the Washington Post, Politico, the New York Times and The Hill.

The president will announce a revision of auto-industry regulations on Wednesday, the White House told reporters on Tuesday. One of the Obama administration’s last moves was to finalise tough federal fuel efficiency standards.

It is the first in an expected reversal of large parts of the Obama team’s work to reduce emissions across the US economy.

But business leaders said continued policies would allow the US to meet its commitments to international climate treaties as well as give investors confidence.

One of the biggest questions hanging over the fledgling presidency is what Trump will decide to do about the Paris climate accord. Trump and senior Republicans have expressed antipathy towards the UN agreement, with Trump vowing to “cancel” the agreement during his campaign.

Reports in recent weeks have painted Trump’s daughter Ivanka and her husband Jared Kushner as defenders of the Paris Agreement within the president’s inner circle. Former vice-president and climate campaigner Al Gore told the Washington Post that he felt the president would keep the country inside the agreement. Secretary of state Rex Tillerson has said he would prefer the US to stay inside the UN process.

However previous interventions by Gore and the president’s daughter during the transition failed to deter Trump’s appointment of a cabinet populated by climate sceptics and fossil fuel interests.

The group of businesses said: “Implementing the Paris Agreement will enable and encourage businesses and investors to turn the billions of dollars in existing low-carbon investments into the trillions of dollars the world needs to bring clean energy and prosperity to all.”

Read more on: US | World | Donald Trump US