Researchers are developing a machine that simultaneously heats homes and produces snow, to save a national pastime from global warming 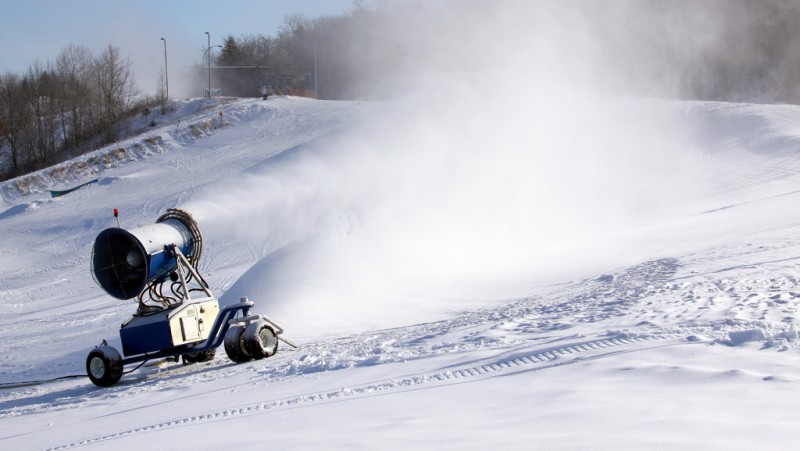 Snow-making machines use a lot of energy - but what if they doubled as home heaters? (Pic: Flickr/Sangudo)

Ski resorts all over the world are increasingly turning to expensive snow-making machines as the climate warms.

This method uses so much fuel that it contributes to global warming. And it only works if the air temperature is below freezing, so many low-lying resorts are being abandoned.

Norway, where skiing is the country’s favourite sport and a useful form of winter transport, is hoping to come to the rescue with a new way of producing snow that heats buildings at the same time.

The work is being supported with a 2.3 million krone (US$300,000) grant from the Norwegian Ministry of Culture. It argues that skiing is engrained in the country’s culture – Norwegians say they are “born with skis on their feet” – so they cannot afford to lose the sport.

Conventional snow-making involves spraying water into cold air and letting physics do the rest. But even the recent advances, where water is “seeded” with a protein from a bacterium that allows snow to be made at temperatures around freezing, are not sufficient to keep up with the warming climate. Once the temperatures are above freezing the method does not work.

The Norwegians believe they can get round this problem by using heat pumps. Heat taken out of air can be used to warm buildings in a ski resort, and the cold air that is produced can be used outside to make artificial snow.

Researchers at SINTEF, Scandinavia’s largest independent research institute, and the Norwegian University of Science and Technology (NTNU) believe that an adaptation of the technology used in domestic fridges and freezers will solve the problem.

Petter Nekså, an energy research scientist at SINTEF, says: “At higher temperatures, you need a refrigeration plant to make snow. The advantage is that this process is independent of air temperatures. One of the main aims of the project will be to find out how we can produce snow regardless of the outdoor temperature, and to develop energy-efficient ways of doing it.”

“Just like we have artificial football pitches, we could also create future snow parks”

What can make the process energy-efficient is heating a building with the heat generated by the pump as it cools water to be made into snow, Nekså says.

“In this way, we can heat indoor facilities while also making artificial snow for ski slopes outside – virtually cost-free,” he claims.

The approach involves adapting current heat-pump technology, says Jacob Stang, one of Nekså’s colleagues at SINTEF. “A traditional snow-production facility that makes snow at zero degrees outdoors has no ‘hot side’,” Stang says. “That means we need a heat pump that has the properties of a refrigeration plant. We have to adapt components, such as an evaporator and condenser, to get them to work together.”

The project will be conducted in collaboration with the city of Trondheim, where SINTEF and NTNU are based, and the Norwegian Ski Federation (NSF).

The researchers are also hoping to develop better ways of storing snow, which is an approach many ski resorts use as a precaution against warmer temperatures. Currently, sawdust is used to store artificial snow that can be spread on slopes and trails when the weather doesn’t deliver. While this is a proven approach, over time the sawdust loses its insulating properties and has to be replaced.

“Norway has a long tradition and expertise in this field,” says Trygve M Eikevik, a professor in NTNU’s Department of Energy and Process Engineering. “The fishery sector produces around 300,000 tonnes of ice each year for fish export. This is enough to cover an 8-metre-wide, 150-kilometre-long ski trail with a layer of ice that is half a metre thick. It is, therefore, more than possible to manufacture snow for skiing.”

The NSF hopes the project will increase Norway’s chances of hosting skiing world championships in the future, but officials are most concerned about maintaining the sport as a pastime in Norway.

“The challenges posed by climate change represent perhaps the greatest threat to ski sports. This is why we’re very pleased that this project is taking off,” says Marit Gjerland, a ski run consultant for the NSF. “Good results from the project will mean a lot for the future of ski sports.”

She says the technology could also expand the popularity of skiing, by making snow available in places where it didn’t naturally occur. “Just like we have artificial football pitches, we could also create future snow parks,” she says.

One of the aims of the project is to establish a snow technology research centre based in Trondheim, where both Norwegian and international projects could be carried out.