Drought, heat and commercial foresting have made it easier for fires to spread, killing 11 people and consuming entire towns 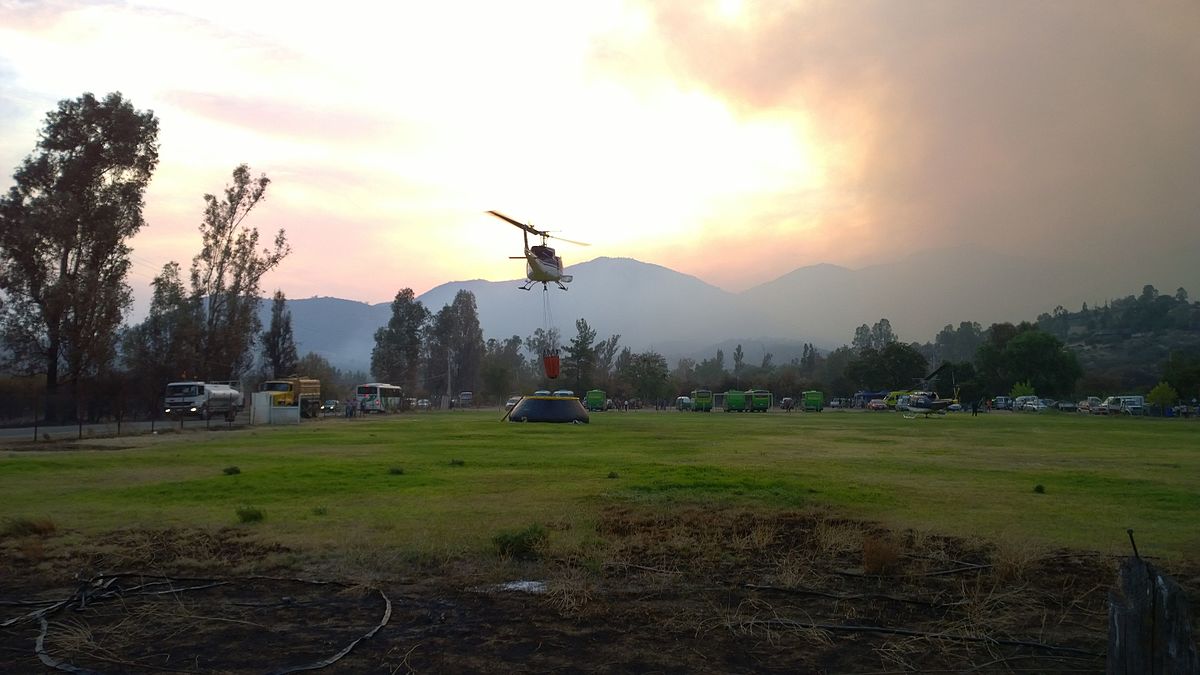 A helicopter hauls water to douse the blaze on the outskirts of Curacavi (Pic: Jorge Morales Piderit)

Chile is fighting its worst wildfires on record. Government officials blame both climate change and human action for the blazes.

A decade-long drought has left the South American country tinder-dry and, together with higher than average temperatures, made it easy for the fires to spread. Forty-three people have been arrested and accused of arson.

Forest fires are a regular feature of the hot, dry Chilean summers, which last from December to February, but this year’s fires have devastated almost a quarter of a million square miles, leading to President Michelle Bachelet declaring a national emergency. “We have never seen anything on this scale in the history of Chile,” she said.

In addition to local weather patterns, shaped by climate change, a review of Chile’s wildfires published in the Global and Planetary Change journal warned that the “pattern, frequency and intensity” of wildfires in the country “has grown at an alarming rate” in recent years, partly because of intensive forest management practices that have led to a large amount of flammable fuel in the country’s forests.

In the last few decades, closely planted eucalyptus and pine plantations have covered much of what was previously farmland or native forest. The native forests, with their undergrowth and biodiversity, enjoy much higher humidity, but the commercial forests tend to be dry.

“This is a horror, a nightmare without end. Everything has burned”

The worst hit areas are the centre and south of Chile, which is a long, thin country, squeezed between the Andes mountains and the Pacific ocean. The capital, Santiago, is now wreathed in smoke, and images from NASA’s Earth Observatory also show big clouds of smoke covering most of the centre of the country.

So far, 11 people, including several firefighters, have died, thousands have been evacuated and entire towns have been consumed by the flames. Some of the vineyards in the Central Valley, home to many of Chile’s best known wines, have been badly damaged.

More than 11,000 firefighters, including police, military, and civilian personnel and volunteers, are fighting the flames. Other Latin American countries have sent teams and equipment. Temperatures of higher than 100°C have been reported, and power cables have melted.

Russia and the US have sent supertankers, large planes equipped with tanks carrying thousands of litres of water.

On 29 January fewer than half of 130 active fires were under control. “This is a horror, a nightmare without end,” said Carlos Valenzuela, mayor of Constitución, a city in the path of advancing fires. “Everything has burned.” The authorities are preparing to evacuate the population of 46,000, unless the winds change direction.

The states most affected are in the central southern part of the country, particularly the regions of O’Higgins, Maule and Valparaíso, where Chile’s major port is located. More than 100 vineyards in Maule have already been destroyed by the fires.

Winemaker Sergio Amigo Quevedo has lost six hectares of 120-year-old vines.“It is hard to believe that those vines, which you have taken care of with such love and sacrifice, are lost… because of a voracious fire caused by careless men. It is a tremendous pain to lose these ancient vines that we bought in 2008 to preserve them from turning into a forest.”

Vineyards in the Colchagua Valley, one of Chile’s most famous wine-producing areas, are also threatened by the encroaching flames, as is the region of Bío-Bío, south of Maule. More than 40 national parks and conservation areas have been temporarily closed to visitors.