The Sierra Club, Greenpeace and Friends of the Earth are among US NGOs benefitting from surging support to fight Donald Trump’s anti-green agenda 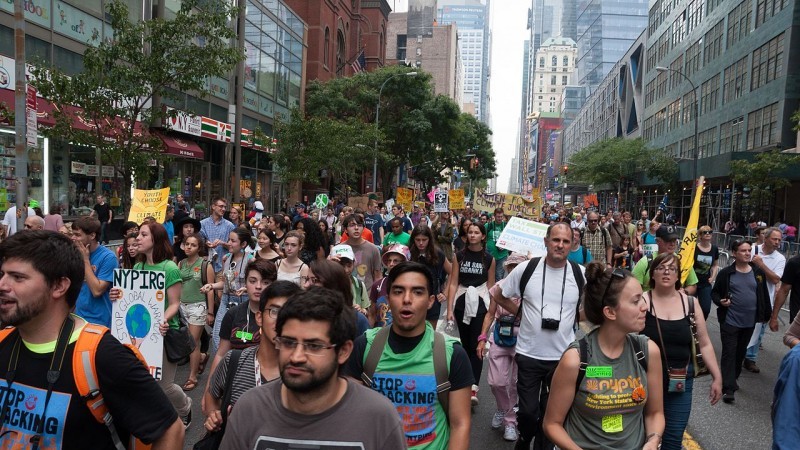 US green groups have received an “unprecedented” surge in monthly donors since the election of Donald Trump as president.

The rise of the Trump, who is viewed as antagonistic to many of the aims and values of green groups, has seen monthly donors to the Sierra Club jump from 35,000 to more than 52,000 since early November.

The Sierra Club’s chief advancement officer Mary Nemerov said these donations (taking into account a certain degree of attrition) would add more than US$3m to the the group’s annual bottom line.

She said the major boost came in the two weeks after the election. But subsequent developments during the transition, most notably the selection of climate sceptic Scott Pruitt as head of the Environmental Protection Agency, prompted further spikes in donations and new memberships.

“We’ve never seen the volume like this and we’ve never seen it around monthly donors, we’ve seen spikes in one time gifts. But that people are joining monthly, so being committed to the cause over time, is something that is truly unprecedented,” said Nemerov.

There is traditionally a surge in activity for environmental NGOs during GOP presidencies. But fundraising activities have changed hugely since a Republican was last in office, allowing groups to capture people with online campaigns as they respond to news they may find dismaying.

“Frankly, immediately after the election, making a donation to an organisation that was established was one of the few things that people could do. I think people felt helpless and this urgency to act,” she said.

This helplessness is being offered clear paths on the websites of Greenpeace, the Sierra Club, the Natural Resources Defense Council and the Environmental Defense Fund, with banners sometimes running across the entire homepage (pictured) channelling visitors towards the donor portal. 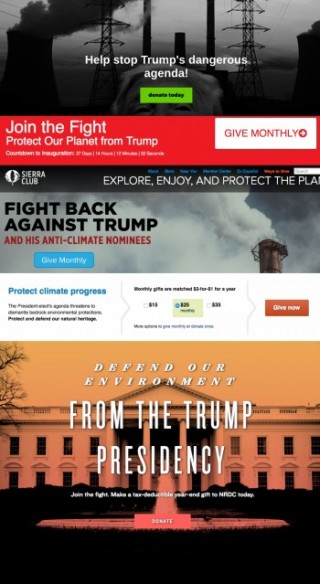 “Our supporters have donated three times as much to support our work as they did during the same period last year. This gives us the strength we’re going to need to fight hard against the impending assault on what the environmental movement has achieved in the past eight years,” he said.

In what promises to be a long, bitter campaign, Stocker said that Friend of the Earth was hiring new staff and preparing members for protest actions.

“People are telling us that this election shook them to the core and those who’ve never been to a rally or a protest before are now itching to get out on the streets and make their voices heard,” he said.

Friends of the Earth has developed a six point plan to push back against a president they believe is going to open new economic opportunities to polluters. On top of organised protest, they said they would fight his agenda in the courts, by lobbying Democratic senators to filibuster legislation in the senate and pursuing aggressive state-based legislation.

Gore, DiCaprio and the media: tools in Trump’s climate deception

Greenpeace said it had doubled the number of new members joining online compared to 2015, adding that support was flowing in from other sources. On Monday alone, with Trump set to announce ExxonMobil oil chief Rex Tillerson as his secretary of state, 1,000 people signed up to volunteer through the organisation’s online portal Greenwire.

“It’s incredible to see so many people who have never thought of themselves as activists before recognising that when pressed, they truly feel passionate enough to escalate their participation in our political system,” said a Greenpeace spokesman.