The latest data confirms an increase in tree-cutting, including in the most valuable carbon-rich areas of Amazon rainforest 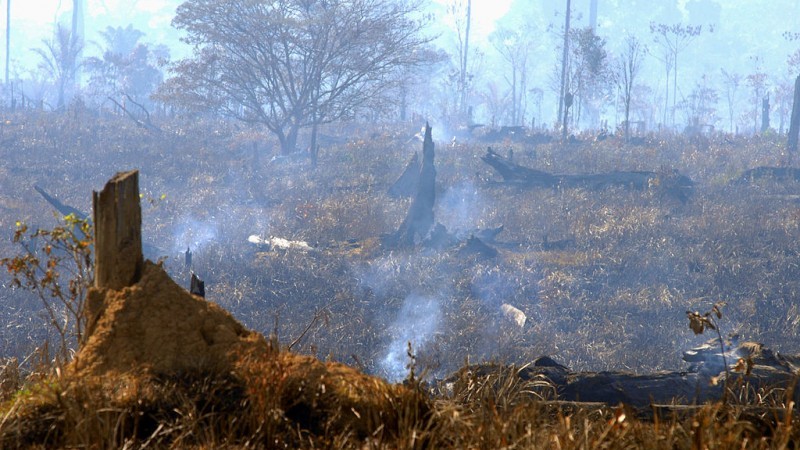 Deforestation is on the rise in Brazil (Pic: Valter Campanato/ABr)

Research institutes, NGOs and even corporations have been sounding alarm bells for a while now due to the increasing deforestation in the Brazilian Amazon.

Official data released by Brazil’s National Spatial Research Institute (INPE) on 29 November confirms the upward trend: 7.989 square kilometers of rainforest disappeared from Brazil in 2016. It represents an area larger than Tokyo/Yokohama and almost the size of the New York metropolitan area clear cut in twelve months.

Interestingly, the State of Mato Grosso, one of the world’s largest producers of food crops, had a 6% decrease in deforestation in the year.

This may be a positive signal coming out of a joint effort by government, civil society and private sector to implement the so-called PCI strategy. It stands for Producing, Conserving and Including, and was announced by Governor Pedro Taques at COP21 in Paris as the way to take advantage of the State’s natural wealth as an asset to its economic competitiveness. The PCI strategy supports the intensification of cattle ranching as well as the re-utilization of areas that were deforested in the past for agricultural and forestry activities. 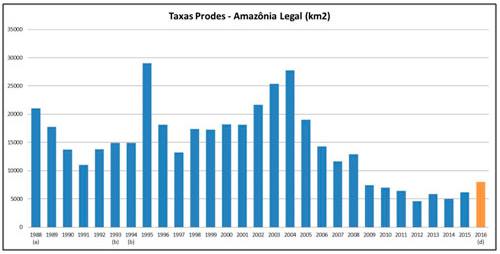 Amazonas State, on the other hand, had the worst performance among Amazonian States in the year: a 54% increase. Amazonas’ forests are very dense, meaning that they store much more carbon than others.

Therefore, there is a multiplier  effect when forests “in the heart of the Amazon” are cut or burnt. In terms of greenhouse gases emissions, a hectare of forest lost in Amazonas can release more carbon to the atmosphere than one hectare deforested in Mato Grosso, for instance.

No nation is regularly monitoring the carbon content of its forests yet – Brazil observes clear cut and some degree of degradation through satellite imagery. But more advanced technology has not yet been deployed.

Brazil’s binding commitment is to reduce 80% of emissions from deforestation in the Amazon until 2020, based on the clear cut data available. In comparison to the base year of 2005, the emission reduction is now at 71%. New and tougher measures are needed to counter this new trend.

In 2008, when satellite data showed that deforestation was increasing again, there was presidential leadership and a clear call to action. Former president Luiz Inacio Lula da Silva, for instance, enacted economic sanctions against illegal logging and production on illegally cleared land and raised the political profile of the anti-deforestation agenda.

Now, deforestation is either small scale or it is the result of uncontrolled land occupation driven by public works, like the Belo Monte dam. The policies of the past are not effective to contain these drivers of deforestation.

With the country in political and economic turmoil, Michel Temer’s presidency has little stamina to change the fate of forests for the better. Stronger coalitions may be needed.