Why the Marrakech summit must deliver on climate finance 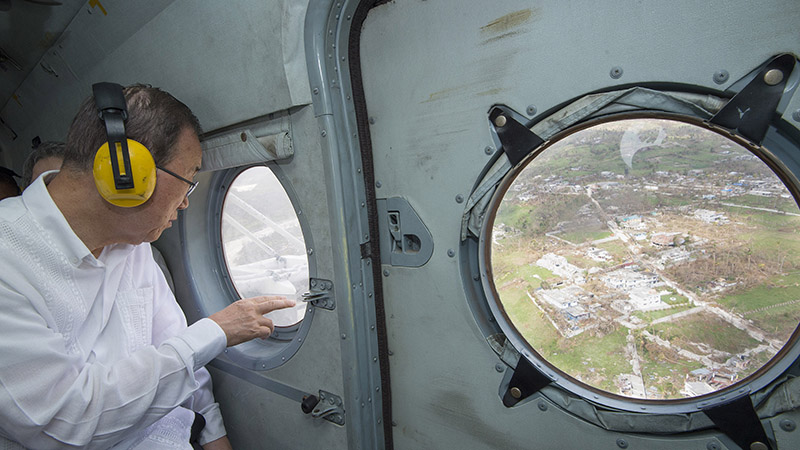 Minutes turned into hours, and still we waited. Few there will forget how that final day of talks at the 2015 Paris climate summit was a test of nerves and stamina.

I sat at the front of the main room watching with anxiety while the heads of delegation from the United States of America, China, Tuvalu, France amongst others huddled in corners making the last push for consensus.

But at, with the flash of a small green hammer at 7:26pm on a Saturday evening it was over, the Paris Agreement had come to be.

Just less than a year later, with near universal signature, the Agreement is set to enter into force on 4 November, an unprecedented feat in international law, and an unprecedented accomplishment for the world.

As a representative of the Alliance of Small Island Developing States (AOSIS), the Paris Agreement is a lifeline for many of our countries that have seen with steady progression the seas closing in on our low lying coastlines.

In my region, the Caribbean, we have also met the fury of hurricanes and tropical storms that can, in but a few hours, roll back decades of development.

There is no more striking detail than the horrific scenes of our sisterly island nation of Haiti, recovering still from an earlier natural disaster, disease and indigence, only to be struck down again by the ravenous path of Hurricane Matthew.

No doubt, Haiti is a sad extreme but it is nonetheless an example of the Sysyphean burden that many a small island developing state has faced, will face, as we fight for our survival in the reality of our changing climate.

We have not yet with any scientific precision been able to calculate what it will cost for us to adapt, perhaps, there is no science to apply when the impacts are so unpredictable and so uneven.

Developed countries committed in 2009 to mobilize by 2020 USD 100 billion per annum of climate finance; in Paris, they confirmed the USD 100 billion target through to 2025 but in a context where the Paris Agreement itself encourages progression beyond previous efforts.

I am pleased to see that the developed countries have made an early effort to develop a “roadmap” to show how the US$ 100 billion could be achieved, and in doing so, attempt to address the question of the balancing resources allocated for mitigation and adaptation.

Moreover, it is important that the developed countries in their roadmap express confidence that by 2020 the overall goal of achieving $100 billion per annum will be met and even surpassed.

However, that these resources will be balanced across mitigation and adaptation is unclear; so too is the clarity of how private sources of finance will factor into this and based on what ratio for every dollar of public finance leveraged.

And, as the case of Haiti starkly underscores, we could only ever look to the 100 billion target as a floor.

Already the Intergovernmental Panel on Climate Change (IPCC) has estimated that stabilizing  greenhouse-gas emissions at a level giving us a decent chance of staying below 2C, to say nothing of the safer 1.5C mark which is the limit of survival for many of our small islands, requires investments in the neighborhood of $13 trillion through 2030.

That figure does not include the tens of billions needed to adapt to worsening climate impacts like Matthew.

The roadmap envisages a doubling of adaptation finance by 2020 which when calculated on the basis of current levels is inadequate and insufficient to remedy the historical imbalance between adaptation and mitigation finance.

In this context, I would readily support the calls for a quadrupling of adaptation finance by 2020 as entirely justified and correct.

The figures are often greeted with considerable sticker shock, but understood against the broader context of the tremendous long term cost savings and countless health, economic and development co-benefits of cleaner energy sources and a healthier environment, not only do the solutions seem within reach—it becomes evident that it would be irresponsible not to seize the opportunities from a fiscal standpoint alone.

To be sure, the roadmap provides a good focal point for our continued dialogue on climate finance, and the high level ministerial dialogue scheduled for the Marrakech conference is a good place to reflect on the roadmap, to assess the priorities in redirecting finance flows, and so reinforce the political signal from Paris that business as usual is no more.

The challenge ahead is to now develop the parameters of engagement of all stakeholders – developing, developed, public, private – towards the operationalization of the Paris Agreement.

For the small island and low-lying countries as my own, how do we ensure that those parameters are responsive to our unique challenges and vulnerabilities whether economic social or environmental.  In this regard, we would want to better understand:

-How public finance can be leveraged to catalyze investment and be strategically targeted for more results while not exacerbating regional and sectoral imbalances or placing the most vulnerable and capacity-constrained countries at a disadvantage to access finance? Furthermore, what measures will be taken if the necessary private finance cannot be mobilized.

-How to improve predictability of financing so that we can implement our Nationally Determined Contributions under the Paris Agreement in earnest.

-What the roadmap means in the context of the trillions of dollars needed to operationalize the Paris Agreement?

-How can developing countries be engaged to support the further refinement of the roadmap, especially on leveraging private sector in a mutually beneficial way.

The momentum that the Paris Agreement has inspired augurs well for a step change in the way in which we should engage so as to profoundly transform finance flows for climate change action and ultimately sustainable development.

The roadmap should be seen as a trigger for a new type of conversation around finance, one that is inclusive, one that builds trust, and one that enhances predictability.

The test of success in my view will be whether we can translate that conversation into opportunities for those most in need to harness the potential of new technology and finance to alleviate the threat that climate change places on their very existence.