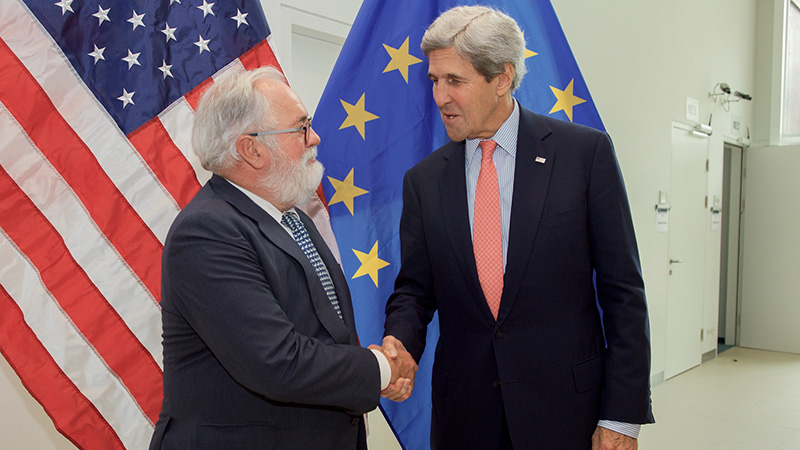 The European Union is on course to ratify the Paris climate agreement next month, but will not further raise its carbon cutting targets till 2018, its top climate official said on Thursday.

Miguel Arias Canete said all 28 member states are supporting a drive to accelerate the bloc’s progress towards approving the UN deal, which has so far been ratified by 60 countries.

“We will have a extraordinary [EU] Council meeting on 30 September which the Slovak Presidency will prepare, Parliament will discuss it in the first week of October then a council of ministers will take the decision. By the month of October it will be ready,” Canete told Climate Home, speaking on the sidelines of the UN General Assembly in New York.

Germany became the latest European nation to secure domestic backing from lawmakers for the deal this week, joining Hungary, France, Austria and Slovakia.

Canete said he had received assurances from UK climate minister Nick Hurd that London would soon start its parliamentary process to ratify. Some Nordic countries are also “quite far” in the process, he added.

But mooted plans for the EU to raise its 2030 emissions cutting goal from 40% on 1990 levels to 50% are on ice pending the UN’s climate science panel publishes a review of global progress.

“We will wait till 2018 to see the IPCC panel review on pathways for 1.5C… then we will make an economic and social assessment,” he said.

The 1.5C goal was a key demand of vulnerable countries in the 2015 Paris agreement, but scientists say levels of carbon pollution need to be radically cut before 2020 to have any chance of meeting it.

Accounting for 12% of global greenhouse gas emissions, EU approval could push the UN treaty into international law. Requiring 55 countries covering 55% of emissions to sign up before it enters into force, so far the deal has nearly 48% of emissions from 60 countries in the locker.

New York HFCs boost
Hopes for a UN deal to cut the use of potent warming gases known as HFCs received a boost on Thursday – 100 countries including the EU28, US, Australia, Argentina, Canada, Chile, Colombia and 54 African nations said they support proposals set to be presented for agreement in Kigali later this month. Bill Gates and other top donors also offered $80 million to help developing countries find alternatives to HFCs, which are used in air conditioning. An HFC cull could prevent 0.5C of warming, say experts at NRDC.

Canete blamed complex intra-EU talks on how carbon cuts would be shared out among all 28 states for the bloc’s inability to ratify earlier, instead watching the US and China gain headlines for their joint-joining announcement.

Those negotiations are ongoing and unlikely to be resolved soon, with the EU Parliament assessing potential funding options to help big polluters like Poland clean up their energy mix.

One complicating factor is the UK’s impending exit from the EU, which may require the remaining 27 states to again divide their carbon footprints at a later date.

Refusing to be drawn on potential outcomes of Brexit, Canete stressed that on climate at least, Brussels-London relations remain warm.

“It has always been splendid. We have three chief negotiators in international talks and one of them – Pete Betts – is British,” he said.

“We got on well with Amber Rudd in Paris and the new minister Nick Hurd is already integrated in the high ambition coalition in a very constructive way.

“I am very impressed by the spirit of ambition, because from what I have seen they will keep ambitious policies in the future.”