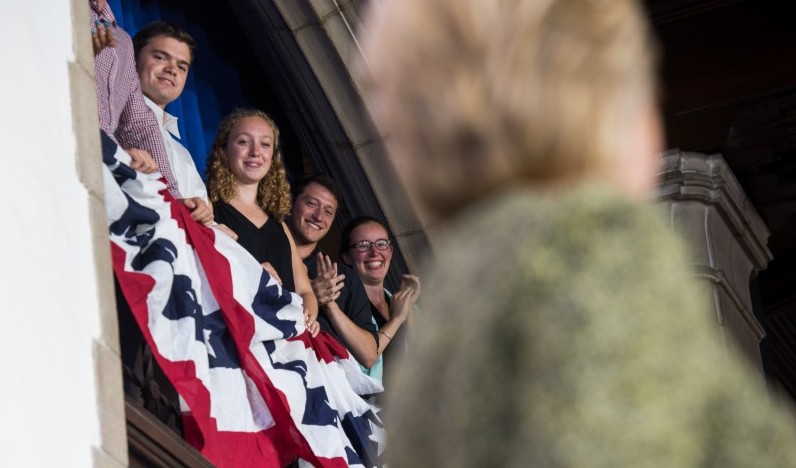 Young voters have attacked Hillary Clinton as “disingenuous” after Climate Home analysis revealed she pruned references to climate change from her speeches after defeating her Democratic primary opponent Bernie Sanders.

Transcripts of Clinton’s public addresses show that in the last six months of the primary season she mentioned “climate change” directly in one out of every two public addresses. But after securing the endorsement of her socialist rival in June, that rate fell to once every five speeches.

“This is why millennials don’t like you. This is why you are struggling with them,” said Kyle Kulinski, speaking about the story on his radio show Secular Talk. “When you do something as disingenuous as care about one set of issues in the primary, then pretend to care about a whole new set of issues in the general, like I said you’re building deception into your fucking strategy. So that’s why we don’t like you.”

It was a week in which Clinton had attempted to win over young voters, among whom polls show her support is running consistently lower than expected. In response, she has given a speech at Temple University in Philadelphia, in which she did mention climate change, and posted an op-ed on the millennial news site Mic.com, in which she did not.

Even as Clinton attempted to reach out, young commentators and voters pointed to her pivot on climate change as an example of a general sense that she is motivated by politics rather than principle. New York-based journalist and radio host Nomiki Konst tweeted a link to Climate Home’s story, which was reproduced by the Guardian, adding simply: “Yo, millennials can google.”

A GWU Battleground poll in September found just 22% of voters between 18 and 34 think Clinton “says what she believes”, by contrast two-thirds think her Republican rival Donald Trump is straightforward, even though just 20% said they would definitely vote for him.

Another recent poll of reveals the potential for this distrust to undermine Clinton’s ability to convey her message. Throughout the campaign she has been clear that she believes in climate change and has policies that will promote massive growth in solar power. Yet 30% of young voters believe there is no difference between her and Trump on climate and clean energy. The same Trump who says climate change is a “Chinese hoax” and wants to “cancel” the Paris climate agreement.

Young people have more to lose from global warming than any other voters. Climate Home’s story was shared tens of thousands of times on social media sites and provoked long discussions over what some called the “lesser-evilism” of Clinton. Konst said the priority for millennials facing a choice between a Clinton and Trump presidency was to hope for a Clinton win, then gear up for a fight.

“That’s why we have to show up, organize and shame her so that she can’t [ignore progressive issues],”she said. “BLM [Black Lives Matter] is a perfect example. Organize, organize, organize!”

This cynical stuff looks entirely normal inside the political bubble but is a big reason Clinton may lose https://t.co/jNE1tANGhG

Political experts told Climate Home that the need to court undecided voters in the centre meant Clinton should be focussing on issues they care about. Polling shows climate change is not a vote deciding issue for the majority of US voters.

But Kulinski believed the political calculus would backfire. Addressing Clinton, he said: “When we see you talk we can basically envision the conversations you are having with your strategists behind the scenes… If you really care about something it doesn’t change with the political season… Even if it were true (which it’s not) that people don’t care about it as much, you should talk about it because it’s incredibly important.”

Read more on: US | US election US