Is climate change causing conflict in the Sahel?

Comment: An emerging narrative points to global warming as a driver of conflict in the Sahel ̶ but this risks glossing over the real root causes 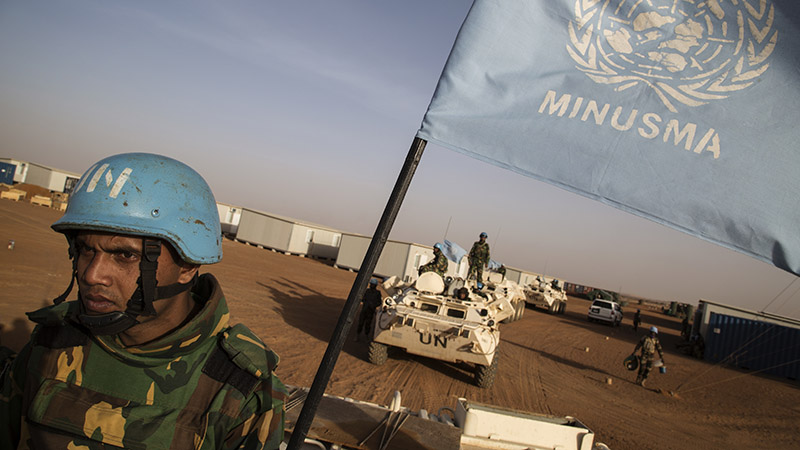 UN peacekeepers from Bangladesh arrive at the Niger Battalion Base in Ansongo, eastern Mali, in 2015 (Pic: UN Photo/Marco Dormino)

The Sahel is often recognised as a hotspot of violent conflicts, typically between farmers and pastoralists or between the state and armed groups.

More recently, jihadist violence has reinforced this image in particular by groups associated with ISIL and Al Qaeda in Mali, Boko Haram in Nigeria and Al-Shabaab in Somalia.

What is behind these conflicts? Most empirical research points to political and historical factors as the root cause.

However, as climate change becomes a leading global political issue, an emerging and increasingly powerful policy narrative presents global warming as a major driver. But how valid is this argument?

Since the Sahelian ecosystem largely depends on rainfall, global warming   ̶  if it reduces rainfall   ̶   may lead to desertification and resource scarcity in the long run.

However, current rainfall trends and projections do not point to less rainfall: while some climate models support the idea that this region will become drier, most models actually suggest more abundant   ̶   but also possibly more delayed and concentrated   ̶   rainfall in the future.

In fact, since the drought years of the 1980s the Sahel has seen more rainfall. It has become greener again, not desertified.

Empirical evidence from international research also casts doubt on the second element of the climate-conflict narrative. Although a link between resource scarcity and conflicts cannot be simply dismissed, most empirical results question its validity.

Rather, case studies in central parts of the Sahel indicate that conflicts have historical and political causes such as government officials seeking rent, as well as policies and legislation that marginalise pastoralists.

One example comes from the dry parts of Africa where pastoralism and farming overlap as the main forms of land use, and where conflicts   ̶  large or small   ̶   are ongoing.

In Mali, farmer-herder conflicts are linked to the state’s pastoral and land tenure policies and legislation. These generally favour farmers and tend to lead to pastoralists being squeezed out of access to grazing land.

Three structural factors are key drivers of these conflicts:

-agricultural encroachment that has obstructed free movement for herders and livestock;
-opportunistic behaviour by farmers and herders that moved to fill a political vacuum left by the disintegration and withdrawal of services following the state’s decentralisation policy;
-corruption and rent seeking among government officials.

Pastoral marginalization was also at the root of the Tuareg rebellion that triggered Mali’s civil war in the 1990s and again in 2012.

The drought of the 1970s and 1980s only played an indirect role in the rebellion:  it led to the migration of young Tuareg men to Libya, where they were hired as soldiers and exposed to revolutionary  ideas.

There was already a strong feeling among Mali’s Tuareg and nomads in general that they were being marginalised by state policies of modernisation, and by policies that encourage fixed settlements.

Then, embezzlement of drought relief funds by government officials in Bamako added to the anger   ̶  and  young Tuareg in Algeria and Libya took up arms against the Malian state in 1990.

The rebellion would have likely taken place without the droughts of the 1970s and 1980s. It’s worth noting the first Tuareg rebellion in Mali took place in 1963 following an unusually humid period.

Pastoralists are flexible and opportunistic in how they use their resources meaning they can more easily adapt to climate variability than many others groups.

But at the same time, state policies that favour settled agriculture in many countries in the Sahel at the expense of mobile and flexible livestock production undermine not only pastoralists’ access to land but also livestock-keeping   ̶ still one of the region’s most important economic activities.

Empirical evidence from other parts of Africa, points to the same conclusion: the link between climate change and conflicts is negligible. Droughts and floods may potentially escalate tensions but evidence suggests that the root causes of land disputes are historical and political.

Climate change is without doubt one of the greatest global challenges of our time. But to suggest it is responsible for causing conflict in the Sahel is overstretching its impact.

This risks undermining long-term public engagement in climate change. It also risks overlooking the political factors that drive disputes. Glossing over the root causes could hinder efforts of finding effective solutions to conflicts.

Tor A. Benjaminsen ([email protected]) is professor at the Department of International Environment and Development Studies, Norwegian University of Life Sciences.

He is author of the chapter Does Climate Change Lead to Conflicts in the Sahel? from the book The End of Desertification? Disputing Environmental Change in tbe Drylands published by Springer in 2016.