Comment: The luxury cruise ship Crystal Serenity is embarking on an historic voyage through the Arctic, and it’s likely to herald a surge in similar trips say experts at ICCT 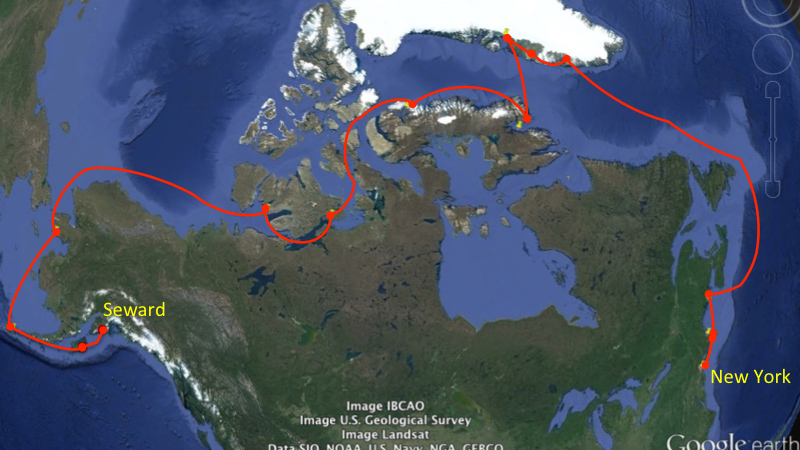 The Crystal Serenity's journey through the Northwest Passage, 16 August to 17 September 2016 (Google Earth)

By Bryan Comer and Naya Olmer

As the Arctic warms, areas once clogged by sea ice are increasingly accessible to fishing, oil drilling, mining, and shipping—both for commerce and for tourism.

The Arctic is one of the most spectacular and pristine places on earth, and it’s no wonder people want to see it for themselves.

Yesterday, the luxury cruise ship Crystal Serenity left port with 1,725 passengers and crew on board for a 32-day voyage through the Northwest Passage.

She’ll journey from Seward, Alaska, to New York City, stopping at several communities along the way—many of which have far fewer inhabitants than the Serenity has passengers.

While a smattering of yachts and smaller passenger ships have plied these Arctic waters over the years, never before has such a large ship set sail on such an ambitious, and risky, voyage through the Northwest Passage.

The Serenity’s hull is not strengthened against sea ice, and a conventional icebreaker won’t escort her; instead, she’ll be accompanied by the RRS Shackleton, a British logistics vessel typically used to support Antarctic researchers.

However unprecedented, the Serenity’s voyage is a sign of things to come. This may be the beginning of a boom in Arctic vessel activity.

And while Arctic shipping may bring economic benefits to both local communities, in the form of increased trade and tourism revenue, and to the global economy, through the ability to ship goods via shorter routes, the environmental risks are undeniable.

One concern is how to deal with the waste products of what is basically a floating city. Based on the EPA’s estimates of per capita sewage and graywater generation aboard cruise ships, we estimate that each day the Serenity will generate about 15,000 gallons of human sewage and another 116,000 gallons of graywater.

Crystal Cruises, which operates the Serenity, says it will “voluntarily” discharge this waste at least 12 nautical miles from shore — which is, by surprising coincidence, the minimum distance from shore the ship can legally discharge sewage without treating it first.

Of course, mistakes do happen. Another Crystal cruise ship, the Harmony, has been banned from visiting Monterey Bay California, for releasing effluent too close to the Monterey marine sanctuary.

But the real risks aren’t posed by negligence or misbehavior but by the harsh, violent sea environment of the Arctic itself, and the bigger concern isn’t wastewater, it’s oil spills.

Most ships operating in the Arctic will burn heavy fuel oil (HFO), the residual leftovers of the crude oil distillation process. While HFO is dirty and viscous, it’s cheap and widely available, making it the preferred fuel for ships.

The Arctic Council has recently identified HFO as “the most significant threat from ships to the Arctic marine environment.” Due to its viscosity and chemical properties, HFO is inherently difficult to clean up, not to mention highly toxic.

A release of HFO in the Arctic could have devastating effects on this profoundly important and fragile ecosystem.

Meanwhile, in the Arctic, sea ice volume is at a record low for the time of year according to PIOMAS. pic.twitter.com/ig2X5MXcCg

Using HFO to power ships not only increases the risk of spills and illegal discharges of oil in the Arctic, it also produces harmful air and climate pollutants, including black carbon.

Black carbon is particularly detrimental to the Arctic environment, as its dark particles settle on ice and snow, setting into motion a vicious cycle of more melt, less ice, and more warming.

Despite the risks posed by the use of HFO, marine vessels in the Arctic are not encouraged to use cleaner fuels, unlike ships in other areas of the world.

Within Emission Control Areas (ECAs), ships are required to reduce their air pollutant emissions by either burning cleaner distillate fuels or by using scrubbers.

All the coasts of the U.S. and Canada are covered by an ECA, with one notable exception: their Arctic coasts. In fact, despite its sensitive ecosystem, no part of the global Arctic is covered by an ECA, an omission we’ll discuss in an upcoming blog.

Arctic shipping poses significant threats to the climate and to the Arctic environment—not unique to the Arctic, but uniquely serious there.

There are policy measures we could take to mitigate the risks. As the Serenity makes her way through the Northwest Passage over the next month, we’ll highlight the risks and policy opportunities associated with Arctic shipping.