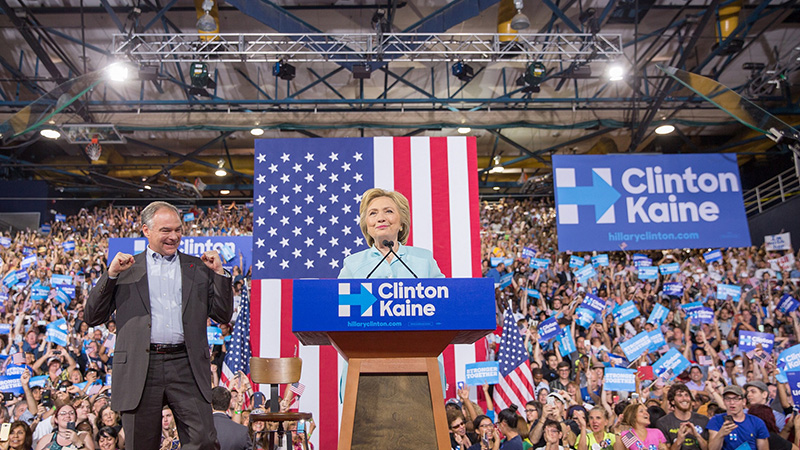 In one exchange DNC communications director Luis Miranda and his deputy Mark Paustenbach discuss the best way to mock Trump’s claim he has a big IQ.

The email – dated 16 May and labelled “you like this hit” – highlights the billionaire’s claim in April the US was experiencing “record, record cold”, challenging anyone who disagreed to an IQ test.

A later exchange between the pair the same month stresses the “broad contrast” between Democrat and Republican positions.

“They promise the same extreme agenda on women’s rights, they deny the threat of climate change, and they oppose fixing a broken immigration system with a path to citizenship,” writes Paustenbach.

In another dated 3 May, staffer Christina Freundlich suggests focusing on what she terms “Dangerous Donald’s Conspiracy Theories”, notably his assertion the Chinese invented global warming.

Other conspiracies repeated by Trump include his doubts over president Barack Obama’s US birth certificate and a claim that thousands of US Muslims cheered when the Twin Towers fell on 9/11.

Earlier emails from 2015 highlight the “Earth Day dilemma” facing Marco Rubio and Jeb Bush – both then running against Trump to be nominated as Republican presidential candidate.

“On one hand – you have scientists, the Pentagon, and the American people who are highly concerned about climate change and want a leader to take steps to address it,” says one note.

“On the other hand, you have a team of Republican candidates who deny all the facts to bury their heads in the sand and refuse to address it.”

Last week, the Republican party supported a policy platform that refers to coal as “clean” and pledges to reverse Obama policies to limit greenhouse gas emissions from power plants.

In contrast, a proposed Democrat energy plan includes a nationwide carbon tax, incentives for wind and solar and tougher regulations for new oil and gas pipelines.

Read more on: US | Hillary Clinton | US Elections US