Comment: Funding and dates for phasing our gases used in fridges and air conditioning need to be finalised, but a deal that could take 0.5C off warming projections is now up for grabs 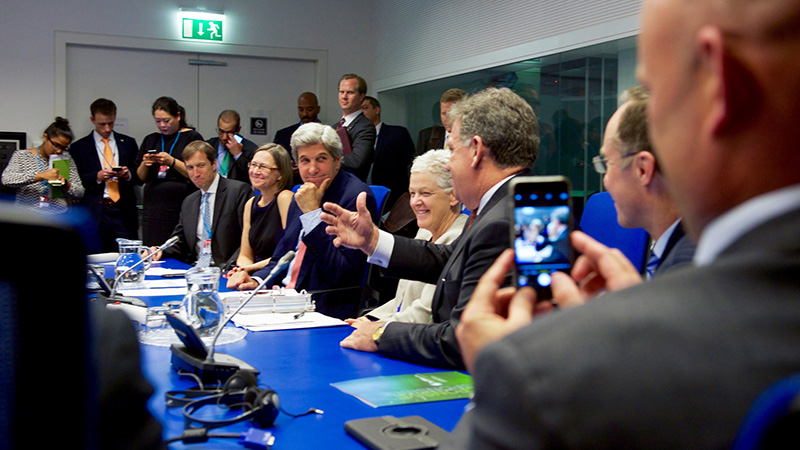 US secretary of state John Kerry meets with representatives from NGOs in Vienna at the Montreal Protocol talks on HFCs (Pic: State Department/Flickr)

The latest round of negotiations under the Montreal Protocol concluded late Saturday night in Vienna with key elements of an amendment to phase down hydrofluorocarbon (HFC) gases.

The progress in Vienna sets the stage for a final agreement at the Meeting of the Parties scheduled for October in Kigali, Rwanda.

Countries are now closer than ever to a historic breakthrough that can dramatically reduce the risks of global climate change.

Because they are potent greenhouse gases rapidly expanding in their use in refrigeration and air conditioning, HFCs are a critical target in international efforts to achieve the goal established under the landmark Paris Agreement of keeping temperature increases well below 2 degrees Celsius.

An ambitious HFC amendment could reduce global temperatures by an estimated 0.5 degrees by 2100 compared to business as usual growth.

The highlight of the meeting was a call to action delivered by US Secretary of State John Kerry.

His appearance, along with several days of morning to late-night engagement by Environmental Protection Agency Administrator Gina McCarthy, underscored the critical importance the United States places on using the HFC amendment to build on the momentum achieved in Paris.

Great to hear voices joined in support of #HFCPhasedown at #MontrealProtocol mtg. Only together can we reach our goal.

Two key issues were the focus of the negotiations in Vienna: the baseline (the level of HFCs from which controls are based) and timetable for limiting HFC emissions, and the guidelines for providing financial support for developing countries in meeting these obligations.

While more work remains to be done before the October meeting, real progress was made on both fronts.

The proposal for developed countries centered around setting a baseline of 2011-2013 with a 10% reduction from there by 2019. Most of these countries have already begun limiting HFCs though domestic regulations.

For developing countries, where HFC use is only now ramping up, a wide range of proposals was put forward.

India’s proposal would allow the longest unrestricted use with a baseline of 2028-2030 and a freeze at 2031.

On funding issues, there was broad agreement on using the Protocol’s Multilateral Fund as the institution for administering financial support to developing countries.

Secretary Kerry emphasized that over 75% of the fund’s donor base of developed countries has already publicly stated their intention to provide additional funding to implement an HFC amendment.

The key points of contention relate to important details concerning what aspects of costs will be paid and over what period of years.

Despite the progress made last week, closing the deal on an HFC amendment in October will not be easy and is by no means assured.

With continued US leadership and a willingness among all nations to cooperate in confronting the clear and present danger of climate change, an HFC amendment in 2016 should be achievable.

Steve Seidel is a senior adviser at the Centre for Climate and Energy Solutions, a Washington DC-based think tank