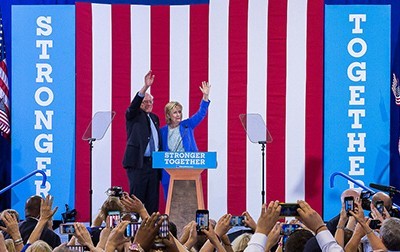 Need convincing climate change will be a huge issue during the 2016 US elections?

Watch the clip below. As Bernie Sanders prepares to endorse Hillary Clinton as the Democrat presidential candidate, one of the top US climate campaigners takes to the stage.

Founder of 350, Bill McKibben has led direct action against high carbon projects like the Keystone XL pipeline, and kick-started the global divestment movement.

For years he railed against power, a campaign that has seen him escorted from the front of the White House in hand cuffs. But here he is, effectively backing Clinton as president.

“We’ve come from an all-of-the-above energy policy, to a natural gas is a bridge to the future, to a platform that gives clear priority to the awesome power of the wind and sun,” he said to cheers.

“A platform that say the same standard that stopped the Keystone pipeline, anything that makes global warming worse we won’t do… that will apply in a Democrat administration.”

Time was US politicians steered clear of climate. Now it’s seen as a way of marking out Democrat territory against a Republican candidate who is deeply climate sceptic.

“I think it’s a bright line dividing issue,” said Pete Ogden, a senior fellow at the Center for American Progress, an influential Democrat-aligned think tank in Washington DC. “It’s an issue that while it is politically partisan, a lot of people think addressing it is good.”

Air and water pollution in some parts of the country were “overwhelming” for some communities, he added.

Report: Clinton could run on strongest climate platform ever

Signs are green groups are now drawing battle lines, with the Sierra Club releasing a report detailing how Trump would be the only elected head of government in the world to deny climate change.

Political organisations affiliated to Friends of the Earth and the National Resources Defense Council (NRDC) have also come out in support of the Democrats.

In contrast the West Virginia Coal Association and American Energy Alliance, the advocacy arm of the Charles Koch-founded Institute for Energy Research, said this week they are supporting Trump.

The group’s president Tom Pyle said Trump would move the US forward by “opening up more federal lands and waters for energy exploration of all kinds”.

Pyle added a Trump presidency would subject the Paris climate deal “to the scrutiny it deserves”. The candidate himself has said he would “cancel” the 2015 pact, which was approved by 195 countries last December.

Read more on: US | Donald Trump | Hillary Clinton | US Elections US