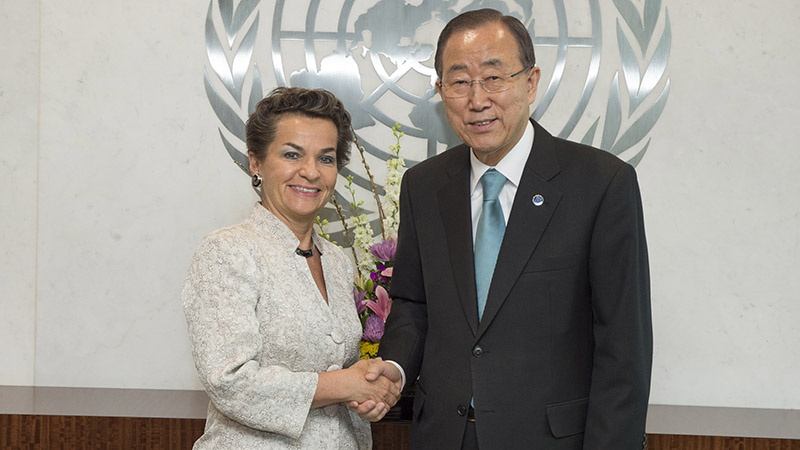 The worst-kept secret in climate politics is out: Christiana Figueres wants to lead the United Nations.

A day after she stepped down as UN climate chief, the Costa Rican government has proposed the 59-year-old as a candidate for UN secretary general.

Figueres led the UN to one of its greatest diplomatic triumphs last December, when 195 countries backed the Paris climate agreement, the result of over 25 years of negotiations.

“The Paris Agreement can be an exception or the norm for multilateralism in the 21st Century,” she told an audience of senior Costa Rican politicians in the capital San Jose. “I believe it can and should be the norm, as it is the only way we can face global challenges…

“Impossible is not a fact, it’s an attitude… we can and should change that attitude because without optimism and firm conviction that we humans can solve problems we have created we cannot go far.”

Figueres’ nomination was broadly welcomed by officials she worked closely with while running international climate negotiations.

“She demonstrated at the UNFCCC [UN climate body] she was not an average diplomatic official,” said Teresa Ribera, former Spanish environment minister and head of the Paris-based IDDRI think tank.

“She is someone who can combine creativity, a positive attitude to get the best from people and at the same time create a good atmosphere to encourage action.”

“The thing that strikes me is that she successfully brought the world together to seal an agreement. She knows how to work with countries of every kind and size to craft a deal.”

So far 12 former diplomats, prime ministers and foreign ministers have declared interest in replacing Ban Ki-moon, who steps down at the stroke of midnight on 31 December.

UNESCO chief Irina Bokova, a Bulgarian and former New Zealand prime minister Helen Clark, now leading the UN Development Programme, are among those in the running.

A job brief published on the UN website lists “leadership and managerial abilities” and “extensive experience in international relations” among criteria for the post.

With the ongoing Syrian civil war, terrorism, reform of the UN and myriad humanitarian crises soaking up resources, the incoming chief will have little time to settle in.

The daughter and sister to Costa Rican presidents, Figueres is steeped in politics and has lived and worked in the US, UK and Germany.

Great to see @CFigueres nominated for @UN Secretary-General. She did an amazing job bringing the world together on climate change. #NextSG

This year Time Magazine listed her as one of its top 100 “pioneers” for 2016 while Forbes rated her the world’s seventh greatest living female leader. But questions remain.

“She has impeccable political lineage. But does she have the experience as compared to some others in the fray?” Indian MP and former environment chief Jairaim Ramesh said via email.

“It is a giant leap for her… and ambition should be made of stern stuff, as the bard had Mark Antony say at Caesar’s funeral.”

Profile: How Figueres rescued the UN climate talks after Copenhagen

Still, while climate change is often viewed as a niche topic, its links with the global economy, finance, migration and security mean Figueres can point to a owning a broad set of skills, say others.

A briefing released by London think tank E3G to coincide with Figueres’ announcement argues global warming will impact adversely on all UN projects unless risks are carefully managed under the next secretary general.

“Climate risks pose an existential threat to the United Nation’s mission to maintain international peace, rights and security,” it reads.

“The narrow focus on climate could hurt her, but if you see it as a threat and risk multiplier then she looks pretty good,” said Harald Heubaum, lecturer in international climate policy at the School of Oriental and African Studies.

“There are few people [in the race] who understand better that sustainable development is the key to prevent conflict in the years to come,” added Ribera.

#Figueres going for UNSG. This is what it means to her mum pic.twitter.com/Hr5NROa60V

The selection process is due to start at the end of July, in what is being billed as the most democratic and transparent UN secretary general hunt yet.

By October, the Security Council is expected to recommend a candidate for the General Assembly’s approval. Permanent members China, Russia, France, the UK and US have the strongest influence on the outcome.

“She is an optimist and this is much needed in a society that has become too vulnerable to the politics of fear and blame,” said Monica Araya, a Costa Rican environmental campaigner and former diplomat.

“We need her to restore hope in our capacity to work out our differences and live better.”