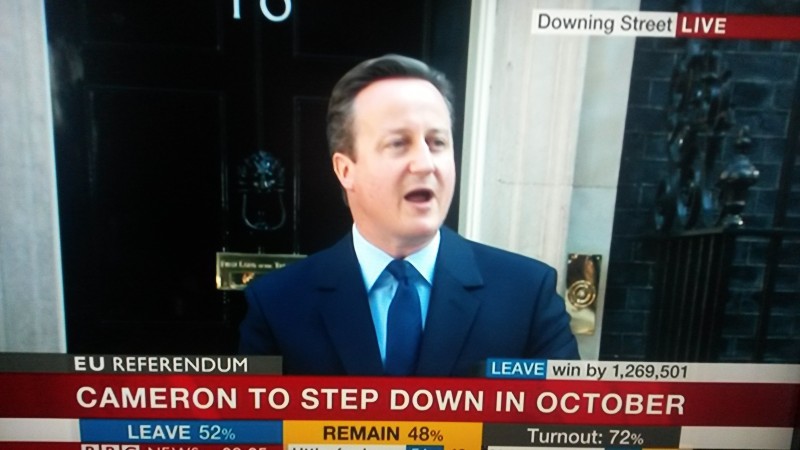 Midway through what’s set to be the warmest year in history, UK voters have elected to leave the world’s most progressive climate change alliance.

The result was tight, but opposite to what most pollsters predicted.

The campaign to leave the European Union won 52% to 48%, gaining strong support in England and Wales, in stark contrast to London, Scotland and Northern Ireland.

At 0830 an emotional David Cameron emerged from 10 Downing Street to announce he would resign his position, with a new prime minister expected to be in place by October.

Few analysts on the airwaves through Friday morning know exactly what happens next. The value of the pound has crashed, global markets appear jittery, social media is in meltdown.

Where many experts do agree is that this vote poses considerable risks for the energy and climate agenda in London and Brussels.

The UK has historic electricity and gas links with Europe, and is deeply enmeshed with the continent’s low carbon regulations and policies, such as the regional emissions trading scheme.

Carbon markets, renewable energy and the Paris climate agreement were emphatically not key issue areas during the referendum.

But they are likely to be priority areas for the UK and EU for the rest of this decade, and it’s evident just hours after the result that many environmental campaigners are worried.

“I challenge politicians of all parties to affirm their commitment to strong UK environmental laws and to guarantee united action on climate change, despite our upcoming exit from the EU,” said James Thornton, chief executive of Client Earth, an environmental law organisation.

“Many of the laws which my organisation uses to ensure that nature and health are protected in Britain were drawn up with the UK’s agreement in Brussels.”

The UK’s former climate change chief Ed Davey sent out a short tweet quoting Jesus Christ as the result became clear: “Father forgive them for they do not know what they are doing.”

London and Brussels will likely regard each other warily for now, fearful of the forces unleashed during the bitter final weeks of the Brexit campaign and in anticipation of a new prime minister this autumn.

In the coming years they will need to work together to re-evaluate a partnership that helped drive global investments in clean energy through the 2000s, and deliver the 2015 Paris climate agreement.

That’s because the market volatility set loose by Brexit is likely to lead to a UK recession, and potentially a global slowdown. In the 2008-09 economic crisis emissions fell 1.4%.

Longer term the EU will lose its second-largest economy and a key driver of the region’s low carbon policymaking, the founding member of the 13-strong Green Growth Group of EU nations.

Despite a vocal quorum of climate sceptics the UK has consistently argued for Europe to target 50% greenhouse gas emission cuts by 2030, as opposed to the current 40%.

Britain gave Europe muscle. Without it the bloc’s power and unity will come under scrutiny.

2 – Will this vote damage the Paris climate deal?

Short answer: Not imminently. Approved by 195 countries last year, the Paris summit signalled a clear shift in global low carbon momentum towards major emerging economies and the US.

Bizarrely, Brexit could accelerate efforts to ensure the Paris climate deal enters into force, if the UK Parliament decides it can now unilaterally approve the agreement this year.

Three questions for UK officials
-Does it develop a new climate plan or stay inside EUs?
-Evaluate how its links with emission trading system will develop?
-Does new PM maintain commitment to green agenda?

Until now London has been waiting on plans from Brussels to share the region’s planned carbon cuts, but few expect the EU to have that sorted before 2017.

The maths is simple: The Paris deal needs 55 countries covering 55% of emissions before it can come into force.

Scientists at Climate Analytics reckon at least 50 countries accounting for 53% of emissions will have backed the deal by the close of 2016. The UK accounts for just over 1% of global emissions. It could tip the balance.

3 – How will it impact EU climate ambition?

No mistake, this vote is a savage blow to the guts of the European Union, leaving governments across the region stunned. Few will have global warming as a priority.

Historically, the UK has adopted a European leadership role with France and Germany on arguing for tougher emission cuts, rolling out a regional carbon market and formulating energy policy.

For one, don’t expect the EU to ratchet up its 40% cuts target with the UK no longer a player.

Secondly, expect eastern states like Poland to play merry hell over the effort sharing deal with a Brussels leadership they are already in conflict with.

Stakes are high. A hostile Russia still controls gas supplies to the east, while progress is needed on reform to the emissions trading scheme, a new electricity market design, as well as revisions to renewables and efficiency rules.

4 – Rise of the climate sceptics?

Many of Brexit’s fiercest and most influential supporters eye a future where the UK produces its own energy from domestic resources, without relying on European interconnectors for power.

Government plans for a coal phaseout by 2025 are now being questioned by some commentators, given the likelihood of a new administration in October with a distinctly brown tinge.

So what do we think the likelihood of the imminent @DECCgovuk consultations on coal phase out and smart power surfacing is now…?

That’s not to say British lawmakers are intent on wholesale sacking of the country’s climate policies.

Just six MPs voted against the 2008 Climate Change Act when it was introduced, and the vast majority of Conservative lawmakers support the notion that decarbonisation is important.

But with the prospect of an economic slump looming as a result of the referendum, climate and environment regulations could be in the firing line in the name of “competitiveness”.

Of the leadership contenders, Boris Johnson dallies with weather forecasters who say the sun is the sole cause of global warming and Michael Gove stands accused of trying to wipe climate change off the national curriculum.

Other candidates including Theresa May, Sajid Javid and Liam Fox have largely steered clear of global warming. None is likely to fly to the Arctic to hug a husky as Cameron did in 2006.

Cameron’s decision to resign spells further bad news for the country’s energy policy vacuum. After a year of inertia and increasingly spooked investors, Whitehall is expected to release a new energy plan by the end of the year.

A damning report from consultants at EY in May noted the government’s track record for “policy U-turns”, downgrading the UK to 13 out of the top 40 markets for renewables.

Plans for new energy projects would fall rapidly from 2017 said the analysis, with the potential for an energy deficit through the 2020s if wind, solar and nuclear projects did not pick up.

Given the long lead-times on projects, key energy companies may yet look elsewhere, fearful of the candidates who could replace Cameron in Number 10.

That, UK energy secretary Amber Rudd warned, could lead to a £500m “electric shock” in the 2020s as a result of low investor confidence.

Others like justice secretary Michael Gove say Brexit could lead to lower bills: “One of the ways in which we can help those most in need is by cutting VAT on domestic fuel,” he said in May.

Historically, the UK has been one of the more generous international donors, meeting a target to deliver 0.7% of national income as overseas development aid.

But many Brexiteers – including Boris Johnson – object to the ringfencing of ODA, which leaves Andrew Norton, head of the International Institute of Environment and Development worried.

“It’s important that the UK finds a way to remain committed to broader multilateralism and it would be a terrible signal if on the back of this we cut commitments to engage in tackling global poverty and public goods such as climate change,” he tells Climate Home.

“Maintaining the 0.7% commitment – which is enshrined in law – is an incredibly important signal.”