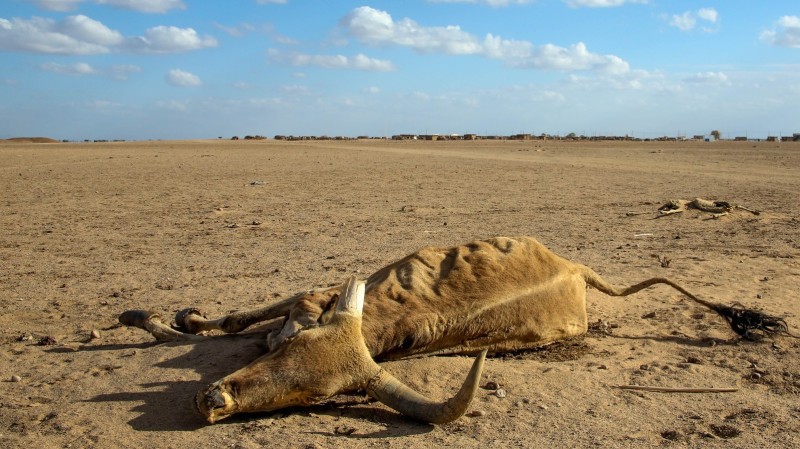 Thousands of livestock have perished as a result of erratic rains in Ethiopia during 2015 (Pic: Abiy Getahun/Oxfam)

Parts of the Middle East and North Africa could become unbearably hot if greenhouse gas emissions continue to rise.

New research predicts that, by mid-century, summer temperatures will stay above 30°C at night and could rise to 46C during the day. By the end of the century, maximum temperatures could reach 50C, and this could happen more often. Instead of 16 days of extreme heat, there could be 80 days.

“In future, the climate in large parts of the Middle East and North Africa (MENA) could change in such a manner that the very existence of its inhabitants is in jeopardy,” says Jos Lelieveld, director of the Max Planck Institute for Chemistryin Mainz, Germany.

He and colleagues report in Climatic Change journal that they used computer models to explore changes in temperature patterns in the MENA region in the 21st century.

Global warming happens unevenly, and many regions are experiencing warmer winters – with earlier growing seasons – but not necessarily many more extremes in summer heat.

But the pattern around the Eastern Mediterranean and in the landscapes of Egypt, Libya, Algeria, Tunisia and Morocco is one of increasing summer heat.

Between 1986 and 2005, the average number of “very hot” days was 16. By mid-century, this could reach 80 days a year. By the end of the century, even if greenhouse gas emissions decline after 2040, the number of sweltering days could soar to 118.

“If mankind continues to release carbon dioxide as it does now, people living in the Middle East and North Africa will have to expect about 200 unusually hot days, according to the model projections,” says Panos Hadjinicolaou, associate professor at the Cyprus Institute and a co-author of the report.

Prof Lelieveld and another co-author from the Cyprus Institute took part in a study of changing atmospheric conditions, to see what aerosol concentrations in the atmosphere could tell climate science about soil moisture trends in the region’s arid landscapes.

“Prolonged heatwaves and desert dust storms can render some regions uninhabitable, which will surely contribute to the pressure to migrate”

They report in the Atmospheric Chemistry and Physics journal that as soils have dried, dust emissions have increased – by 70% over Saudi Arabia, Iraq and Syria since the beginning of this century.

Climate researchers have repeatedly warned that extremes of heat will become the “new normal” at most latitudes. However, those countries that already experience the most relentless summer heat could become increasingly unhealthy and unstable.

Extremes of drought have been linked to the fall of ancient civilisations in the region, as well as to the present conflict in Syria and to the growth in the refugee population in Europe and the Middle East.

One research team recently took a close look not just at heat but at potential humidity levels around the Gulf, and found that conditions could in some circumstances one day become near-lethal. So the latest studies are more confirmation than revelation.

The researchers considered what would happen if the world adopted the notorious “business-as-usual” scenario and did nothing significant to control greenhouse gas emissions.

They also considered a scenario in which the world tried to contain global warming to a 2°C average above historic levels, and in which global emissions began to decrease by 2040. But, even under this scenario, summer temperatures in the region would get to 46°C by mid-century.

“Climate change will significantly worsen the living conditions in the Middle East and in North Africa,” Professor Lelieveld says. “Prolonged heatwaves and desert dust storms can render some regions uninhabitable, which will surely contribute to the pressure to migrate.”