Could the Paris Agreement set a new record for the number of countries signing up on the first day? 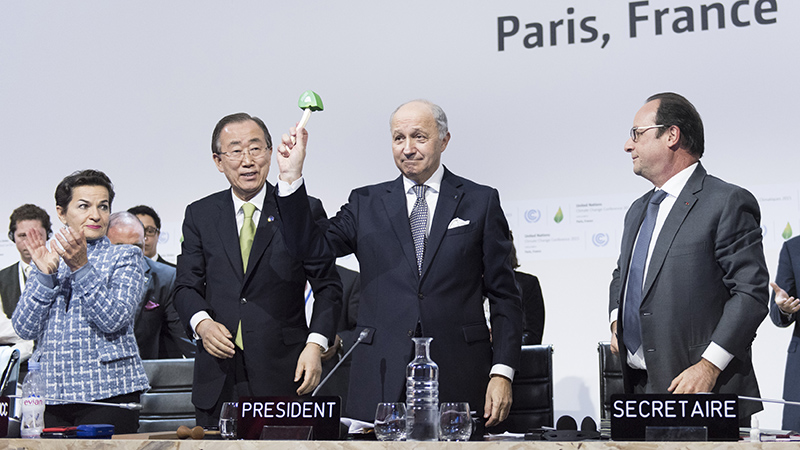 By Andrew Norton and Achala Abeysinghe

Friday sees the next big moment.

United Nations Secretary-General Ban Ki-moon has invited all world leaders to a signing ceremony for the Paris Agreement at the UN in New York on the first day the agreement will be open for signature, 22 April – International Earth Day.

The agreement matters because for the first time, all countries unanimously agreed to take action to combat climate change.

The resulting multilateral legally binding treaty will spur action and investment in a low-carbon, resilient and sustainable future.

In Paris, countries agreed to keep global temperature rise well below two degrees Celsius and to drive efforts to limit increases to 1.5C above pre-industrial levels within this century.

They agreed to a global transparency framework, a collective global stock-take, a compliance mechanism to monitor and review national implementation, to ratchet up climate action urgently and they also agreed to address loss and damage due to climate impacts – another global first.

As the Secretary-General’s invitation says: “The adoption of the Paris Agreement … provides a solid foundation for the low-carbon, climate-resilient transformation of the global economy. This transformation will help secure a future that is safer, healthier and more prosperous for all.”

The Paris Agreement must go through several formal steps before it enters into force under international law. It is open for signing by all states (and the European Union) from 22 April 2016 to 21 April 2017.

By signing, States indicate that they aim to take the necessary steps to be formally bound by the Agreement. They must refrain, in good faith, from acts that would defeat its object and purpose.

The signing ceremony is a largely symbolic event, but important, as it is an opportunity for world leaders to reaffirm the spirit of Paris and show their ongoing commitment to effective collective action to secure a safer climate.

The Paris Agreement must be ratified by at least 55 countries (with the EU counted as one body), accounting for at least an estimated 55% of global greenhouse gas emissions, to enter into force. Once entered into force, countries that have ratified the Agreement cannot withdraw for at least three years

Meeting the 55% emissions threshold will require a number of big emitters to overcome barriers and ratify. But this is not impossible, and could occur before the originally envisaged 2020 start date.

Early entry into force would increase political momentum and boost investor confidence.  And this need not mean forgetting pre-2020 commitments, as they can be fulfilled at the same time.

Ratifying the Paris Agreement as soon as possible gives countries an advantage as it allows them to take part in developing further rules  for implementing it once the agreement enters into force. Countries who have not ratified will lose out on that process. You have to be in it to win it.

Some of the world’s poorest and most vulnerable countries have shown global leadership on climate change, and continue to do so.

The vulnerable small island states of Fiji, Palau, the Marshall Islands and Tuvalu have already completed the domestic processes for ratifying the Paris Agreement. It is to be hoped that others will follow their lead.

Negotiations will continue to elaborate the details of the Paris Agreement, setting the structures for further increasing ambition, and strengthening current mitigation targets.

As existing climate action plans fall well short of what we need to stop warming at 2 degrees, let alone 1.5, these plans must be strengthened.

In 2018 countries will come together to take stock of these plans against the long term temperature goals.  And in 2020, countries are expected to present their revised targets.

To reach the goals of the Paris Agreement, appropriate financial flows and other resources should be put in place, enabling robust action by developing countries. There must be global support for adaptation and loss and damage.

Climate change must remain a key global agenda item for both current and incoming global leaders, including the incoming UN Secretary General.

Early entry into force of the Paris Agreement will energise the movement for global climate action, and empower leaders to move forward.  It would be great if 22 April delivers the symbolic victory it deserves – and establishes a new record for the number of signatures on the first-day.

Dr Andrew Norton is the director of the International Institute for Environment and Development (IIED). Dr Achala Abeysinghe is a Principal Researcher and the team leader of the global climate law, policy and governance team in IIED’s Climate Change Group.