China has big financial firepower. It must channel it towards low carbon through the Asian Infrastructure Investment Bank to lead from the front on climate 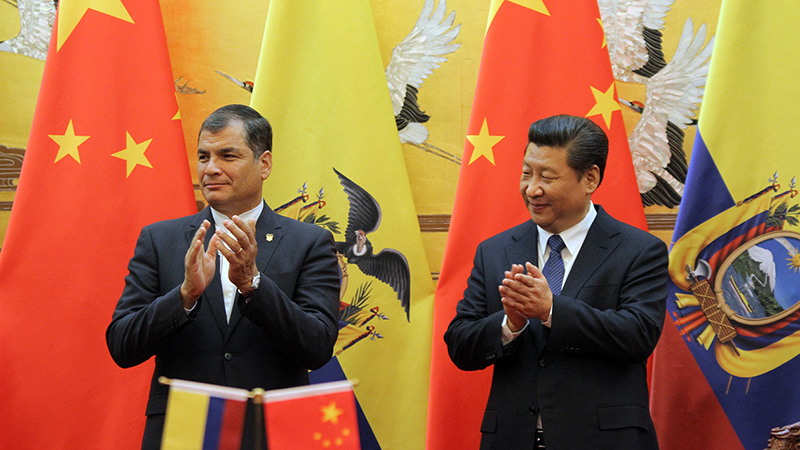 Ecuador president Rafael Correa and China's Xi Jinping. China has given Ecuador loans in return for its oil and is a top investor in the Latin American country (credit: Andes news agency)

China’s overseas investments will increasingly shape the future nature of life on our planet, and nowhere more so than in the area of climate change.

Investment decisions made now in developing countries will lock in the type of infrastructure in buildings, transport and energy that sustain societies for many years to come.

The burgeoning populations, and increasingly high-consuming middle class segments, of developing countries means the implications of these decisions, along with the associated emission of greenhouse gases, have implications for everybody.

That is why the question of how China’s burgeoning investment across the developing world will be used is so important. The growing volume of overseas Chinese investment is clear.

Between 2004 and 2013, China’s overseas investments increased 13.7 times, from $45 billion to $613 billion – with developing countries soaking up a considerable amount of this dramatic rise.

Report: What China’s investment binge in Latin America means for the climate

Despite indications China’s economic juggernaut is slowing, with recent government predictions pointing to about 5% growth from 2021 to 2025, slowing demand at home may actually accelerate a desire to seek overseas investment opportunities.

With initial capital of US$100 billion, the AIIB is nearly two-thirds the size of the decades-old Asian Development Bank, which is led by Japan. China is providing some 30% of the AIIB’s initial capital.

While China displayed wily diplomatic skills in attracting an initial membership of 57 countries, the United States and Japan are notable in their absence.

Beijing has been careful to leave the door open for Washington and Tokyo, while at the same time refuting claims the bank’s formation heralds an attempt to forge a new global, financial order.

In earlier declining an offer to join, the US cited concerns the AIIB would have looser lending standards in environmental and social areas than other international financial institutions.

International power balancing aside, the bank’s emergence has been accompanied by widespread and, arguably, legitimate concerns over possible environmental implications – based on past Chinese investment practices.

Environmental NGO Friends of the Earth found in a report published two years ago many Chinese banks investing internationally were not following appropriate environmental and social safeguards.

More recently, the Business and Human Rights Resource Centre, another NGO, in calling on the AIIB to follow international standards cites its recording of hundreds of local protests about the operation of Chinese extractive firms from Myanmar to Zambia.

Chinese investment in African nations’ forest industries, for example, has been found in many cases to be contributing to deforestation and illegal logging.

China’s overseas investment in Asia has also led to criticism resulting in a Chinese-funded dam being cancelled in Myanmar in 2011 and serious concerns over widespread flooding accompanying the construction of Jatigede Dam in Indonesia’s West Java in September last year.

But the AIIB’s membership of countries known for their progressive approaches to environmental and development issues, such as the UK and Germany, makes it more likely the bank will avoid investing in projects that degrade the environmental and social systems of recipient countries.

Indeed, observers say the AIIB has taken many NGO concerns into account, and that it is too early to judge the bank’s stance on environmental issues, including climate change.

“We should give them the benefit of the doubt and see how the AIIB operates in practice,” said Martijn Wilder, head of global environmental markets and climate change at international law firm Baker & McKenzie.

Athena Ballesteros, Director of the World Resource Institute’s Finance Centre, agreed the AIIB is likely to fill a need for funding infrastructure projects in Asia, but stressed these must be low-carbon.

On the AIIB’s insistence its investments will be “lean, clean and green,” Ballesteros called for vigilance in monitoring the delicate balance of environmental and social concerns with keeping financing transaction costs low for energy and infrastructure projects.

To many observers, the AIIB’s approach to funding projects on the basis of whether they add or decrease greenhouse gases will be a major test of the bank’s approach to environmental integrity.

Ballesteros is on the whole optimistic about the prospects of the AIIB being able to forge a new path of low-carbon development in the region, corresponding to an increased international urgency to tackle climate change.

“As the new kid on the block, the AIIB can help change the way Asia produces and consumes energy and, it can help shape the way we build infrastructure,” she said.

Report: US, China to approve Paris climate deal in 2016

Calvin Quek, a Greenpeace sustainable finance expert, said the amount of international focus on the AIIB means it is likely to follow best environmental practice in funding projects in developing countries.

It is also likely, given the international momentum on climate action following a successful agreement at the seminal UN meeting in Paris at the end of last year, the AIIB will be encouraged and win accolades from investing in low-carbon technology.

It is also becoming increasingly clear that good business sense is drawing funders away from high-emissions and financially risky fossil fuel investments.

The Chinese Government recently forecast coal use in China will fall for a third year in 2016. Partly due to declining industrial output amid a slowdown from past rapid economic growth, it is also driven by public anger at air pollution red alerts.

Domestic pollution concerns, aversion to fossil fuel financial risks and a desire to seek international prestige in sustainability may then lead China to lead from the front on climate change in targeting low-carbon AIIB investments, rather than being pushed from behind.

Simon Pollock is a climate analyst based in Canberra, Australia