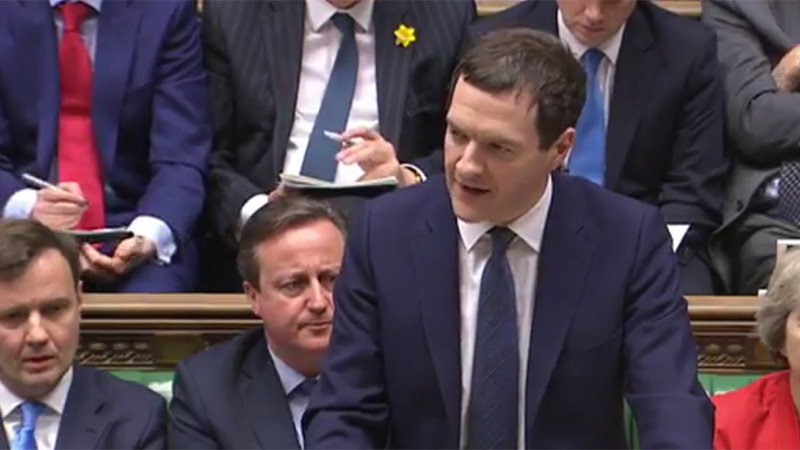 UK oil and gas company stocks rallied after the chancellor announced $1 billion in tax relief for the industry in his budget for 2016.

George Osborne said a 35% Petroleum Revenue Tax (PRT) would be “effectively abolished” and halved a ‘supplementary’ charge for North Sea operators on Wednesday.

“The reduction of the supplementary charge may allow operators to take a second look at projects which, until now, were looking uneconomic.”

Here are the key energy announcements within the #Budget2016 https://t.co/tY6ZkVV34w pic.twitter.com/sYmw3jgLnj

This week the UK government was widely praised for pledging to write in law a commitment to zero carbon emissions in the second half of the century, requiring a radical shift away from fossil fuels.

But a Treasury budget briefing note argued investment in oil and gas production was vital even as the country moved towards a greener pathway.

“The government estimates that oil and gas will continue to meet 70% of the UK’s energy needs out to 2030,” it read.

Addressing a packed House of Commons, the chancellor said he planned to deliver a package that would support and protect future generations.

“We act now so we don’t pay later… we put the next generation first,” he said. “I am not prepared to say we ducked difficult decisions and we did nothing,” he added later.

But green groups said they were disappointed in the first UK budget after the 2015 Paris climate summit, which many had hoped would herald significant investments in low carbon energy.

The PM has set largely carbon free power destination, but chancellor has not put enough renewable fuel in tank to get us there #Budget16

“The £730 million announced for renewable energy should mean we’ll continue building offshore wind farms at about the current rate,” said Richard Black, head of the Energy and Climate Intelligence Unit.

“It’s equally notable that there’s nothing new for onshore wind, biomass and solar – or, indeed, for measures to cut energy waste, which we know is the energy investment that Britons support most. And we still have no idea what support looks like 2020.”

By time #hinkley #nuclear plant operating (if ever), ceilings in #Budget2016 means on #offshore wind will be cheaper pic.twitter.com/GP6NEmtWf6

Sepi Golzari-Munro from the London-based think tank E3G said investor confidence in the renewables sector would remain low given the limited long term support for wind, solar and biomass technologies.

“As the rest of the world races to decarbonise its infrastructure the Chancellor seems happy for Britain to be left behind,” she said.

New investment in new high speed and urban rail systems in London and the North was flagged, but matched by a pledge to freeze fuel duty for a sixth year in a row, a move even centre-right commentators found curious.

No sense in freezing fuel duty when oil prices are so low. Duty should usually move in opposite direction to cost of a barrel #budget2016

As expected a carbon reduction commitment (CRC) to boost energy efficiency was scrapped, part of a government move to simplify tax obligations for business.

This would “greatly reduce the administration and compliance burden placed on many businesses that fall within the carbon reduction commitment scheme,” said Jayne Harrold, senior tax manager at PwC.

But fears greenhouse gas reporting requirements would also be phased out proved unfounded, due perhaps to intense lobbying in support of the scheme from corporate leaders in recent weeks.

Some positive news on GHG reporting & #offshorewind in #Budget2016. Gov must now crack on with job of putting together long-term carbon plan

That decision was welcomed by Stephanie Pfeifer from the Institutional Investor’s Group on Climate Change, which represents 120 companies with £23 trillion management.

“It’s been a central concern of IIGCC’s investor members that the mandatory reporting of GHG emissions by UK listed companies should be maintained as part of today’s Budget,” she said in an emailed statement.

“We wrote to the UK Chancellor on 7 March asking him to uphold this requirement and signed a similar letter from the Aldersgate Group on 10 March. We are delighted to learn that HM Treasury recognises the need to sustain this rule going forward.”