Will US supreme court judge death save climate plan? 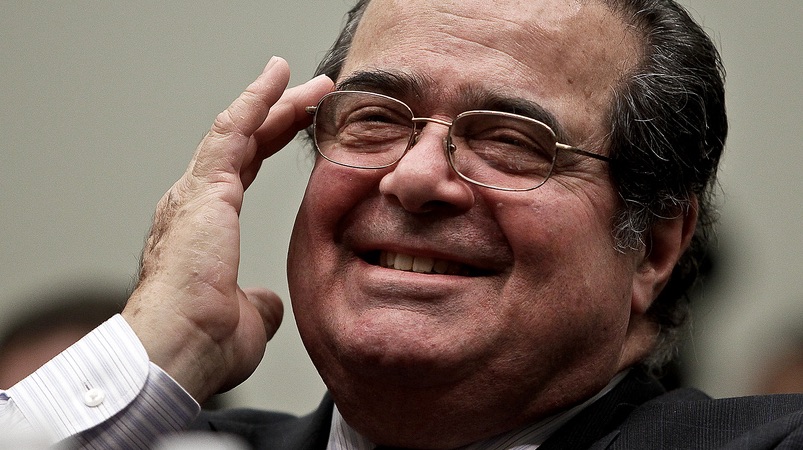 US supreme court judge Antonin Scalia, who has died at the age of 79 (Pic: Stephen Masker/Flickr)

The death of a 79-year-old New Jersey judge could have radically changed the mood music around US president Barack Obama’s beleaguered plan to make states slash greenhouse gas emissions.

Antonin Scalia was one of five members of the Supreme Court of the United States to last week vote to ‘stay’ implementation of the Clean Power Plan, which mandates emission cuts from power plants.

With the death of Scalia – a distinguished justice appointed by Ronald Reagan – there’s now a 4-4 ideological split on the Supreme Court.

Politico: A 4-4 ideological split on the Supreme Court raises the stakes for the more liberal DC Circuit’s eventual decision on the Clean Power Plan, though the high court would still have to lift its stay if the rule is upheld.

NY Mag: The challenge is set to be decided by a DC Circuit panel composed of a majority of Democratic appointees, which will almost certainly uphold the regulations. If the plan is upheld, it would require a majority of the Court to strike it down. With the Court now tied 4-4, such a ruling now seems nearly impossible.

Climate Central’s John Upton: If Obama appoints a new justice in the coming months, it won’t be somebody who would reject his climate rules. Even if Republicans in the Senate prevent Obama from appointing a new judge before the court rules on the Clean Power Plan, then the best that opponents of the climate rules could reasonably hope for would be a 4-4 split. Such a ruling would uphold the lower court’s verdict in the case.

It’s all happening in Washington this week. The world’s top wonks meet for the annual American Association for the Advancement of Science (AAAS) meeting – expect a slew of new reports out this week.

There’s likely to be specific focus on how more frequent extreme weather events will shock the global food system.

Crop yields and climate data show us that the global food system is at increased risk as extreme weather events are as much as three times more likely to happen as a result of climate change by mid-century”.

Other new research to be discussed at the AAAS  suggests 5.5 million people a year die from air pollution, with China (1.6 million in 2013) and India (1.4 million) the biggest danger spots. Pollution from burning coal killed 336,000 in China through 2013 said Qiao Ma from Tsinghua University.

This week in Brussels

Heads of state will gather for a European Council meeting at the end of the week, although this is expected to focus heavily on UK efforts to renegotiate its relationship with the EU.

Russian prime minister Dmitry Medvedev stole the headlines with his claim the world faces a new Cold War, but climate and energy made some limited appearances at the three-day annual strategy meet.

Former Greenpeace chief Kumi Naidoo told delegates to quit celebrating Paris and get to work. “The Paris agreement is not an occasion for orgasmic delight… we took a position to say don’t make perfect the enemy of the good. However we must be clear that, apart from saying we need to take action with extreme urgency, it’s inadequate.”

EU vice-president for Energy Union Maroš Šefčovič revealed the bloc was on course to beat its carbon targets – but brushed away suggestions it should increase its ambition as a result.

“Within a couple of week’s we’ll have our assessment of Paris – I’m sure we’ll overachieve our 2020 goals and our 2030 goals and this year we’ll have concrete legislation on energy efficiency, decarbonisation of transport, buildings performances and reduction of emissions from agriculture.”

It’s all about the money

“Our priorities include the issue of finance. It must be ensured that everyone who undertook to contribute, does so, and the G7 and G20 are important in this respect,” he told a hearing at the French Senate on Friday.

“The second important point involves precisions on how INDCs are reviewed, what the transparency mechanisms are, and the arrangements for a whole series of aspects that remain in the shadows, such as carbon pricing.”

Figueres and Gore to talk…

Prepare yourself for an tsunami of optimism in Vancouver this week. “More than 70 speakers will dare us to dream — to make no small plans,” say the organisers. UN climate chief Christiana Figueres and Al Gore are among the speakers.

Excited to be here in Vancouver for #TED2016 and looking forward to talks from @CFigueres @algore and others! pic.twitter.com/kj1nMGUDVo