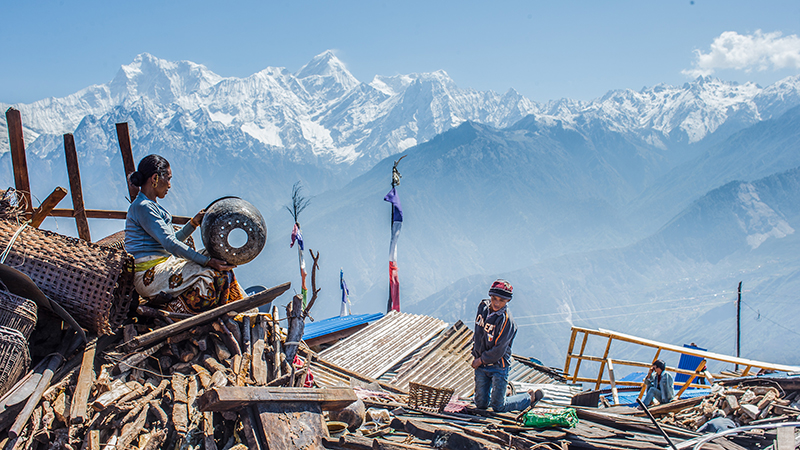 A woman from Singla village extracts her belongings from the rubble in May 2015. Up to 8 million people have been affected by April’s 7.6-magnitude earthquake (Flickr/ Asian Development Bank)

Since the landlocked nation adopted a new constitution last September, Nepalese protesters on the Indian border have barred a main entry point for imports to reach shattered Kathmandu. India has rejected Nepal’s claims it is imposing an undeclared blockade.

Acute energy shortages are crippling a country recovering from a devastating earthquake that killed 9,000 and has affected almost a third of its citizens.

“[T]he recent fuel crisis that sparked from September 2015 has accorded high priority to scale-up production of renewable energy technologies in order to meet the energy demands of urban, peri-urban and rural areas,” wrote Nepal in a tardy submission to a UN climate agreement.

The country of 28 million people is the first to submit since 195 countries signed the Paris agreement in December. That makes it the 188th country to pledge, exiting a group of hold-outs including North Korea, Nicaragua and Libya.

Nepal, which generates 1% of total energy use from renewables, aims to boost that to 20% within five years – and further to 80% by 2050. It will build hydropower plants with installed capacity of 12,000 megawatts by 2030 and 2,100 MW of solar plants. Foreign aid will be key to meeting these targets.

Despite emitting a minuscule 0.03% of global emissions, Nepal said it was playing its part to avoid dangerous warming.

The mountainous state is feeling the effects of receding glaciers and falling precipitation, which could trim an estimated 2-3% off economic growth by mid-century.

In a country where a quarter live below the poverty line, Nepal’s central bank governor recently estimated 800,000 had been pushed into extreme poverty by the blockade of fuel, medicine and food.