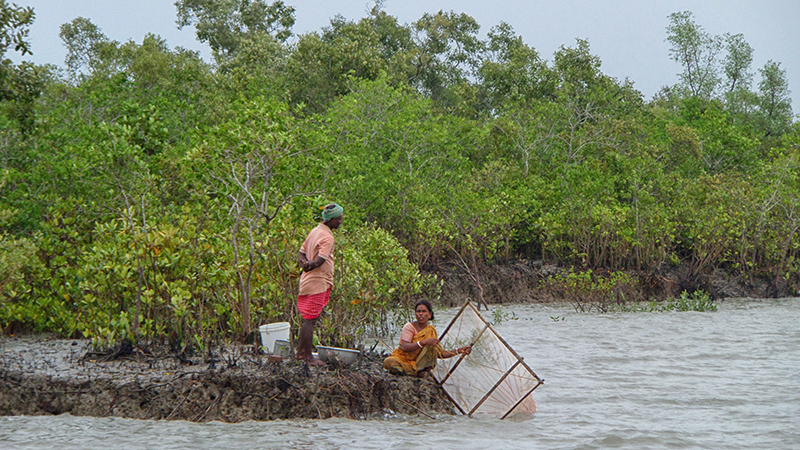 A couple fish in the Sundarbans mangroves. The government is pushing ahead with Rampal coal power station near the World Heritage Site (Flickr/ Kingshuk Mondal)

Bangladesh’s bet on coal power to expand its grid is making slow progress.

The densely-packed, low-lying country is planning 24 coal-fired plants to boost its share of electricity generation as gas reserves dwindle.

The government hopes the polluting fuel’s share could jump from 2% to 50% within 15 years, boosting electricity generation capacity to 20 gigawatts.

But just two coal stations are on track to join its Barapukuria plant, national news site the Daily Star reported on Sunday.

Report: Climate change to wipe 2% off Bangladesh GDP by 2050

“Sources blame bureaucratic bottleneck, lack of strong leadership in the related authorities and lack of understanding about coal power among related offices for this sudden slowdown in project implementation,” it wrote.

Located on the cyclone-swept Bay of Bengal, the nation of 160 million wants to widen energy access to 50% of its people who are off the grid.

Out of eight joint ventures with different countries only the contentious Rampal project, which threatens the Sundarbans mangroves, is making progress. The proposed 1,320MW power station is just 14km from a World Heritage Site and has sparked vehement protest, with some banks refusing to finance it given its environmental impact.

Japanese-funded Matarbari is the other project to go ahead. Authorities’ slowness to process environmental impact assessments were given as one reason for the deadlock. Projects part-financed by Singaporean and Chinese companies are other examples that have stalled.

The country is pursuing clean energy. In its submission to a UN climate deal, it targeted 400 megawatts of wind generating capacity by 2030 and 1,000 MW worth of solar.

Yet it also expanded on its plan to maximise coal mines and new plants in a “carbon-neutral way”.

By 2030 all plants will use “super critical technology”, which burns the fuel at higher temperatures and pressures to reduce greenhouse gas emissions, subject to over US$16 billion in foreign aid.