Five days to make history: What next at the Paris climate talks? 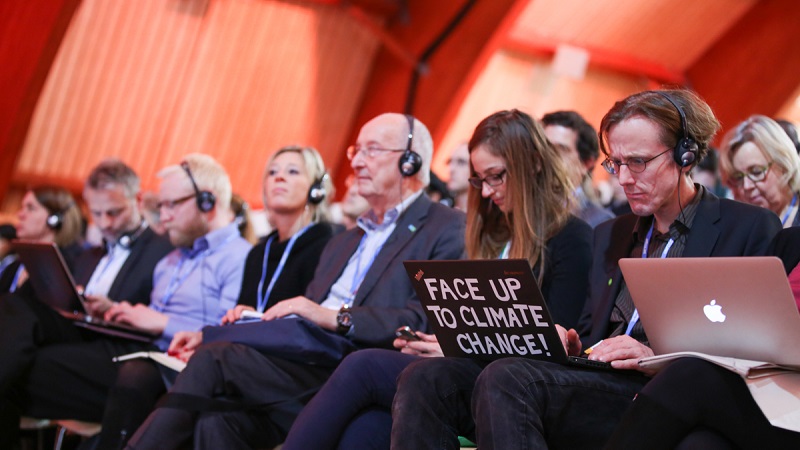 Observers at the talks (Photo by IISD/Kiara Worth)

Ministers from the 195 countries participating in the Paris talks started work on deciphering and clarifying options in the 48-page draft climate deal on Sunday.

They’ve got three days before a deal needs to be ready, said France president Laurent Fabius, as it needs to be translated from English into the other five UN languages. The summit officially ends on Friday.

Ministers will make various speeches and promises at a planned ‘high level segment’ on Monday, while the hard graft takes place behind the scenes.

France and the UN have chosen 14 ministers to head a series of groups focused on sensitive issues. Here’s a full list:

Emmanuel Issoze-Ngondet (Gabon), minister of foreign affairs, and Jochen Flasbarth (Germany), state secretary at the Federal Ministry for the Environment.

Manuel Pulgar Vidal (Peru), minister of state for environment and president of COP20.

An EU official said there’s likely to be a rolling meeting from Monday sorting through proposals from these ministerial meetings.

Note each team has a developed and developing minister. Note too the absence of India, China and the US from the roster.

Pope Francis led prayers for the COP21 summit at the Vatican on Sunday:

“Let us pray that the Holy Spirit will enlighten all who are called to take such important decisions and give them the courage to do what is best [for the] greater good of the whole human family,” he said. Catholic churches in Paris did the same at mass.

On Tuesday evening, St Peter’s Basilica will light up with images of the natural world by some renowned photographers, to underline the theme.

Jonathan Grant, PwC: “Ministers face long nights ahead as they attempt to resolve the many fundamental differences between countries.  But the handover of the draft to the French Presidency was significant as it gives the hosts the authority to manage the talks and help build consensus.”

Abdon Nababan, Indonesian indigenous leader: “I want to take this opportunity to insist that the main text of the agreement fully incorporate human rights, particularly those of indigenous peoples, as an operational strategy for combatting climate change.”

Mattias Soderberg, ACT Alliance: The old division between developed and developing countries is no longer applicable, and we need a fair and equitable differentiation of the future engagement…. we already know that the ambition of the Paris agreement will be too low, and there is need for a strong ratcheting up mechanism, including early review to increase ambition.”

Campaign group Avaaz say they have posted over 1000 ‘wanted’ posts outside 5-star hotels in Paris to highlight what they say are the “seven most notorious dirty energy lobbyists unearthed from the list of more than 50,000 delegates at summit.” The US Heartland Institute is primed to hold a conference in Paris on Monday to highlight what it says are flaws in climate science and a proposed climate deal.

The seven names lobbyists are as follows:

Fossil of the day

At every COP, Climate Action Network awards this dubious distinction to a party identified as obstructing the talks. On Saturday it was the turn of two big oil exporters: Saudi Arabia and Venezuela.

“Venezuela and Saudi Arabia seem to be reluctant to clean up their economies because they want to protect profits from dirty oil, no matter what the cost. Venezuela doubled down on low ambition when their head of delegation, Claudia Salerno, criticised the long term goal, calling it a slogan in a press conference.”

The UN has compiled a timeline of climate finance pledges by countries, multilateral development banks and multilateral climate funds. It looks encouraging, with a flurry of additions in recent weeks.

But researchers at Brown University’s Climate and Development Lab warned there was some opaque accounting going on.

Romain Weikmans, postdoctoral research fellow at the lab, said: “The announcements are very vague and don’t make it at all clear if they are ‘new and additional’ to previous climate finance pledges, to current official development assistance levels, or the 0.7% gross national interest Overseas Development Aid target. It is even unclear if they are grants or loans: most countries count loans at face value, as if they were grants.”